Basalt apartment complex ‘uninhabitable’ after pipe comes through the ceiling 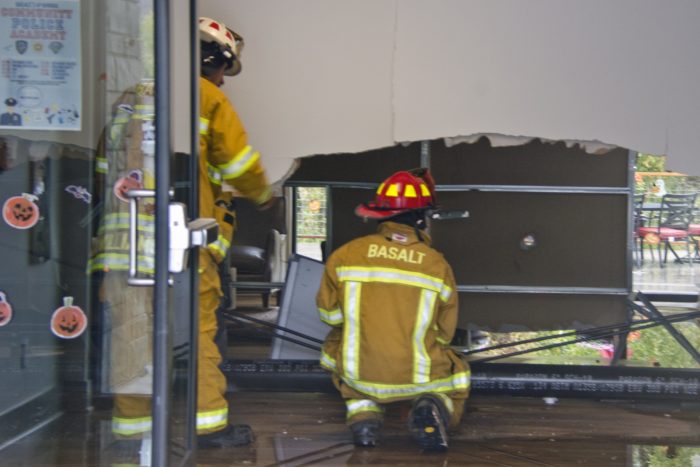 A “utilities emergency” prompted the mandatory evacuation of all 56 units of the Roaring Fork Apartments at 111 Emma Rd. in Basalt on Oct. 2.

“Early on, I’d requested the American Red Cross for their assistance,” said Richard Cornelius, a division chief with the Basalt Fire Department. “We’re estimating approximately 77 residents. The American Red Cross is on site at the Basalt Regional Library (14 Midland Ave., where an evacuation center has been established) to assist those residents who are displaced. My understanding is they’re probably working on those logistics to help those residents. That’s potentially going to impact them for several weeks.”

The view through the main entrance showed that the large water pipe had come down in the hall, taking a large section of ceiling with it. Residents described hearing a sound like an explosion as the pipe burst around noon.

“All first-floor residents have significant water damage,” Cornelius said. “Second, third and fourth do not have damage.”

Still, he described the entire building as “uninhabitable.”

“We believe that will be the case for several weeks,” he continued.

Some residents were initially allowed inside to retrieve essentials and animal control was on site to help with pets. Now, they must first check in at the evacuation center at the library before returning to the premises — and even then, they’ll receive a fire department escort to retrieve any remaining prescriptions or pets. The Aspen Animal Shelter, 101 Animal Shelter Rd., accepted displaced pets until 8 p.m. the day of the incident.

Power was briefly cut off to several adjacent buildings, prompting some businesses to shutter for the day, but has since been restored. Officials say there is no danger to anyone outside of the complex.

“Right now, we have the Pitkin County Incident Management team on scene — that’s just because we expect this to be an extended incident,” Cornelius said. “We have them on scene to help manage. At some point, the fire department will transition the incident to the building representatives, but for now, we’re still here on scene.”