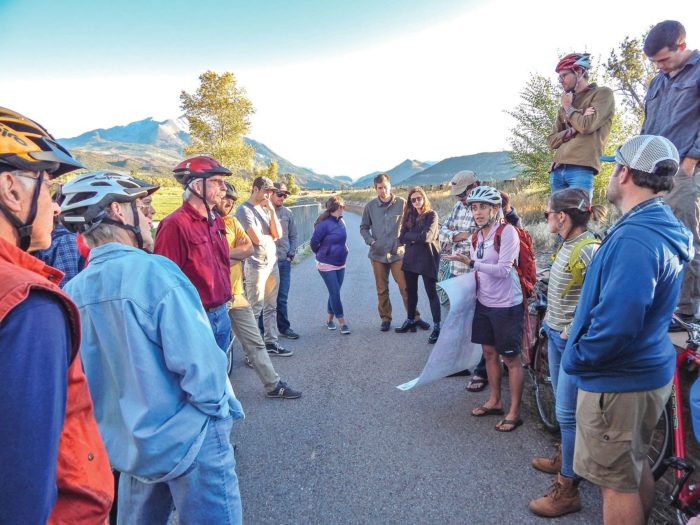 The Carbondale ditch system that runs through town looks about the same as it did in the early 1900s when agriculturally dependent residents built it to conveniently and reliably access water diverted from the Crystal River.

The flow is now more precisely controlled with headgates and maintained with modern machines like backhoes, but the concept is consistent. Residents with homes along the ditch are legally allowed to pump what they need free of charge to water lawns and gardens (ornamental use is not allowed). Other facilities, like parks and golf courses, are also watered from ditches.

On Sept. 25, the Roaring Fork Conservancy (RFC) hosted a bike tour of the ditch system as part of its Watershed Explorations program. They teamed up with Mark O’Meara, Utilities Director for the Town of Carbondale, who lead the tour. A few dozen individuals cruised to several locations along the ditch system listening to O’Meara’s informative narration.

He and his staff oversee the system, spending several weeks every spring preparing it for use, and performing regular maintenance to keep it in working condition during the summer months. “We spend a month at the beginning of the ditch season with backhoes, temporary labor, and staff to clean out all the ditches, get out the mud from the previous year, dig them out, and make sure they’re ready for summer,” he said. The effort is worth the payoff, providing an added perk to living in a location already prized for its high quality of life.

Carbondale does not charge residents for ditch use — a rarity among municipalities that have ditch systems (which is a rarity in itself). Most require purchasing shares and ponying up for annual dues. In Carbondale, residents are responsible for purchasing and maintaining their pump to physically extract water from the ditch, but after that they are home free.

“Having the ditches here has saved us a tremendous amount of money,” said O’Meara. Were it not for the ditches, the town would be required to provide tanks, pipelines, and treatment plants that would require “…millions of dollars of investment. [Ditches] are a much better way to do that. It’s a win-win for everybody,” he said.

The ditches are currently flowing strong, though 2018 has been a tough drought year. “Water has been taking more of a main stage this summer,” said Liza Mitchell, Education Programs Manager at RFC. “We saw this coming in January, but there’s only so much you can do.” Driving some of the questions coming from participants seemed to be an underlying anxiety about the drought conditions experienced this summer, and what might happen if this situation occurs with increasing frequency. Mitchell outlined differing theories. Is this part of the normal drought cycle that happens every five to ten years, or is it symptomatic of a more afflicting “aridification” of the West? “This might be the new normal,” said Mitchell, “so let’s think about how to prepare for that.”

O’Meara added that “this is a pivotal dry spell… There is no water in the watershed. It’s not a matter of use — the use is the same.”

While he conceded that some evaporation loss could occur along the ditch system, he also emphasized that the ditches recharge groundwater, which in turn helps keep the water in the river throughout the winter. He noted that everyone in the valley has received pressure about how they are using their water during the drought.

He pointed to some local successes, such as River Valley Ranch’s estimated 30-50 percent reduction in usage this summer. He also touted a new initiative in development to create a “smart” ditch system that would use automation based on demand to control the flow in ditches. He acknowledged that new user groups — such as kayakers and boaters — want to see much higher flows in the Crystal River, which can be at odds with heavy agricultural use. “At some point everyone’s gonna have to give a little — or give a lot, because it’s a finite resource.”