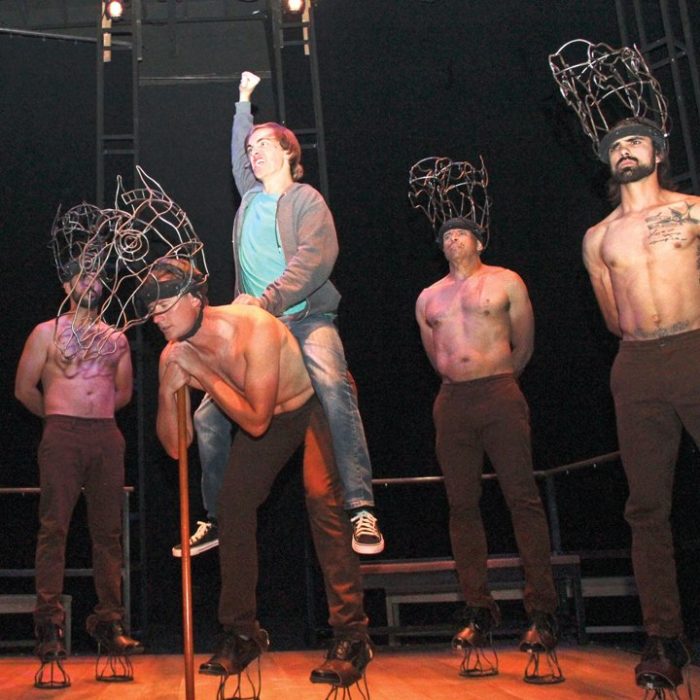 The small stage positioned in the cavernous darkness of Thunder River’s black box theatre can barely contain the unbridled passions loosed by Equus. This stage is an emotional boxing ring in which disturbed 17-year-old Alan Strang squares off against middle-aged psychiatrist Martin Dysart.

The discomfort begins even before the play as five horses — bare-chested men wearing seven-inch-high, custom-made horse “hoofs” and sculptured-metal horse masks — drift into the theatre and wordlessly graze and clop about. Towering nearly nine feet, they evoke awe, giving theatre-goers a glimpse into the passionate, almost-religious connection that young Strang, played by Isaac Stackonis, feels for them.

Huddling into the neck of the horse Nugget, Strang’s chosen mount, Stackonis mutely lets us know that there’s an element of homoeroticism in his worship.

But if the boy worships horses, why did he gouge their eyes out? Why does he refuse to ride? Those are among the questions that psychiatrist Dysart is asked to answer after a magistrate asks him to restore the boy’s sanity and save him from prison.

As staged by Thunder River Theatre Company (TRTC), Peter Shaffer’s two-act play becomes a fencing match between Strang and Dysart, who emerge as polar opposites. Strang is an insane adolescent. As Dysart discovers, the boy can hardly read. He has no friends, no knowledge of physics or art, no music other than the TV jingles he spouts as a way of parrying with Dysart. Psychiatrist Martin Dysart, played by G. Thomas Cochran, is sane, urbane, contained and frustrated by an ultimate lack of meaning.

Critics have faulted this play as being too much an artifact of its era. Equus, which won both Tony and New York Drama Critic’s Circle awards for best play, was written a few years after Timothy Leary urged us to “tune in, turn on and drop out” of the establishment. It’s clear that Dysart ineffectually longs to do just that, seeking to tune into Dionysian vibes on vacations to Greece while longing to drop out of a job that ultimately offers no answers. Conflicted, he confides to magistrate Heather Soloman that even though Strang is suffering, the boy has “known a passion more ferocious” than anything Dysart has ever felt — and he envies it.

The play’s power turns on the struggle between Strang and Dysart. In TRTC’s production, Stackonis and Cochran deliver by stripping their characters down to an emotional nakedness that lifts the play beyond its era. TRTC’s bare, square stage, its shadowed lighting and horses that rise to the heights of the towering gods of classical Greek theatre, allows this production to do what live theatre does best — to evoke archetypes and imagination. (Although Equus was made into a film, critic Roger Ebert skewered it, noting that the blinding of horses works a great deal better as stage symbolism.) That symbolism works eerily well in TRTC’s production.

Strang’s equine worship turns on a psychological triple play: his identification with horses connects with his own and his mother’s fascination with the passion of Christ, it mirrors his own masochism, and it stirs his latent homosexuality. TRTC stages the climatic scene that reveals all this with a twist — one this reviewer won’t reveal. Suffice it to say that TRTC’s stagecraft brings the play’s suspense to a galloping climax.

In portraying the disturbed 17-year old, 24-year-old actor Issac Stackonis balances power with nuance. He manages to telegraph angst and distance during a fully-nude adolescent sexual encounter with an equally-unclothed Jill Mason, played by Britany Dye. That nude scene stands in marked contrast to Stackonis’ fully-clothed but sensual nuzzling of Nugget, played by Nyle Kenning. For the role of Alan Strang, director Corey Simpson reached beyond the Roaring Fork Valley, casting a graduate from Colorado Mesa University who is now based in Los Angeles. (Stackonis is the first participant in TRTC’s Guest Artist Program.)