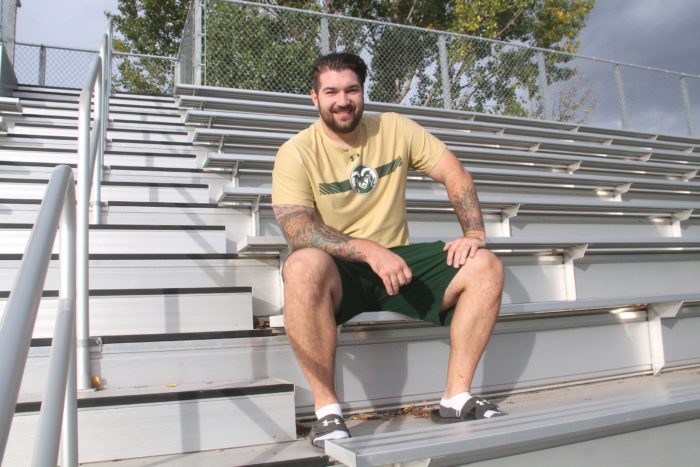 While most National Football League players and fans have Super Bowl Sunday circled on their 2019 calendar, Trae Moxley is looking forward to the week after. That’s when the new Alliance of American Football  league kicks off its 12-week season, and the Roaring Fork High School alum hopes to snag a place in the trenches as an offensive lineman for the Salt Lake City Stallions.

“The league is like the D (developmental league) in the NBA, or minor leagues in baseball,” the former Colorado State University offensive lineman told The Sopris Sun. “They (the league) wants you go on to the NFL.”

Until league pre-season camps start on Jan. 1, Moxley can be found working out several days a week at Roaring Fork High School with professional trainer Eric Bollock. “I couldn’t have done this without him,” Moxley said.

The league’s inaugural season concludes with a four-game playoff, and championship game in late April. Player benefits include three-year contracts worth a total of $250,000 plus health insurance, bonuses based upon performance and “fan interaction”, and a one year scholarship in post-secondary education for each season of play, according to an article in the Washington Post.

The Alliance of American Football league owns all teams. The television partners are CBS and the CBS Sports Network. Games that are not televised by CBS will be streamed live.

Most of the AAF rules are the same as in the NFL, with exceptions that include:

Moxley, who was not drafted by any NFL team after college, signed with the AAF’s Salt Lake City Stallions after attending a rookie tryout camp with the Arizona Cardinals earlier this year. Flash back to Moxley’s sophomore year at Roaring Fork High School, and he was about 6’3”, 215 pounds. Exiting Roaring Fork three years later, the three-sport star stood 6’5” and weighed 265 pounds. “He (Bollock) knew my body and that I could put on weight and take it off. I credit this all to him. He turned me into the athlete I am today.”

Football fans from the 1980s might remember when some linemen and linebackers would leave high school at less than 250 pounds, then bulk up to 275 and more, and in some cases take their thin-boned but beefy body on to the NFL.

When asked how he packs on weight, Moxley said he takes in a lot of protein and works hard in the weight room, “ … and my body frame allows it (weight gain).”

Moxley started his college football career at Colorado State University as a tight-end, which he played in high school when he wasn’t taking a direct snap from the center and running sweeps, but upon a request from his coaches, switched to guard after his freshman year.

“We had a lot of tight ends and needed help on the line … so I was happy to help any way I could,” he said.

Moxley weighed an average of 315 pounds throughout a college career that culminated with 11 starts as a senior and an Honorable Mention award in the Mountain West Conference, which includes Boise State, the University of Wyoming, the Air Force Academy, Brigham Young and San Diego State University.

At CSU, Moxley was part of an offensive line that ranked 11th in yards produced in the NCAA’s Division 1, and led the Mountain States Conference with 472 yards per game, allowing only one sack per game. He is one of five former CSU players hoping to land a roster spot with an AAF team.

Moxley is friendly, somewhat soft spoken, articulate and demonstrates a matter-of-fact confidence in his football abilities. In high school, besides his football honors, Moxley was also an all-state basketball player and helped his team to the Colorado State 2A playoffs.

“I’m unique. I hold my weight well… I move well. I can play both sides of the ball (left and right side of the offensive line). I’ve played all the (offensive line) positions except center, and I could learn that.”

His goal for years has been to play in the National Football League.

So,  football fans and Moxley watchers, circle your calendar for  Jan. 9 and keep an eye on the Salt Lake City Stallions in the brand new Alliance of American Football league.