Win the contents of Carbondale’s most mysterious safe 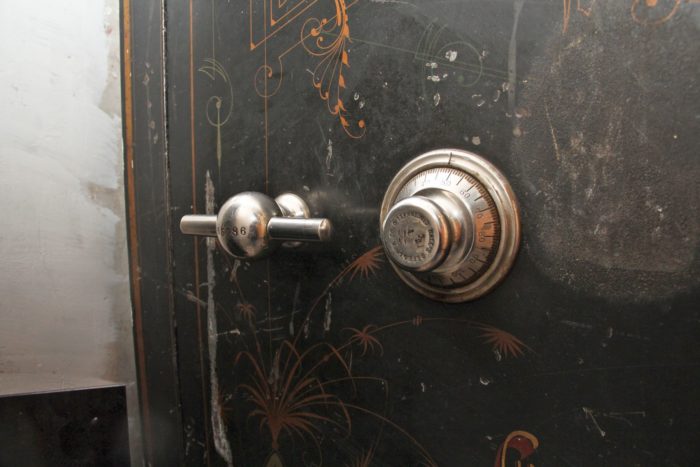 Inside of Steve’s Guitars, inside of a vault, is a safe. It has never been opened since Steve moved into the building 20 years ago, nor in memory dating back before then. “Well, I don’t think there is much in there,” said Steve about his instinct. “But then, someone asks me, really? Do you really believe that? And then I pause, I’m not so sure, and I wonder,” he laughed. “Who knows what could be in there? You don’t get too many mysteries like this in a small town.”

Ever since Steve moved into the Dinkel Building at the corner of Fourth and Main, the safe that is inside the vault right next to his stage has driven him crazy.

“Well, you know, I’ve tried. I’ve tried a stethoscope, playing with the tumbler, researching it.” To this day, Steve doesn’t know when the safe was made or who made it, let alone what is inside of it. And it’s finally time to find out. Steve got in touch with the Carbondale Historical Society and they made a plan to open it.

On Saturday, Oct. 6, Potato Day attendees can buy a $10 ticket from the Carbondale Historical Society to the safecracking event, which includes one door ticket for a chance to walk away with the afternoon’s grand prize. The event begins at 3 p.m. at Steve’s Guitars that same Saturday. Listen to old-timey music, check out artifacts from the Dinkel Family, and learn some of Carbondale’s history. Then Wayne Winton of Tricounty Locksmith Service is going to crack the safe, exposing the contents for the first time in known history, which will go to one lucky winner.

When Wayne does crack the safe on Potato Day, there will be a certificate inside that will identify the who, the where, and the when of the safe’s creation and history, shedding some light on the history of the building itself, and of Carbondale.

According to Sue Gray of the Carbondale Historical Society, the historic Dinkel Building was an epicenter of town in the 1890s when William Dinkel built his enterprise that included a hotel, a bank, a mercantile, and a potato storage and brokerage. In 1891, a fire destroyed buildings in the west end of Carbondale, where the Bank of Carbondale resided. A safe was salvaged from the bank, and wheeled to the Dinkel Building. Whether this is that safe or not will be discovered when it’s opened this Saturday. Gray also confirms that no one knows when the safe stopped being used; it’s contents are unknown and impossible to predict.

Steve has never found much else in the way of treasures around the building: nothing beneath a floorboard or behind some wainscoting. “There have been a number of ghost sightings here,” Steve said, some less credible than others given the BYOB nature of his shows. Though in fact, there was a murder once in the Dinkel Building back when part of it was a hotel. There’s an immense amount of history in Fourth Street, in the Dinkel Building, and potentially in this safe.

“I suppose I really have no idea what’s inside of it,” said Steve, “but it sure would be nice to have a bar of gold.” Instinct might tell you the safe is empty, but how sure are you? All proceeds from the ticket sales will go to the Carbondale Historical Society. Find the Historical Society in Sopris Park this Saturday throughout the Potato Day festivities, or show up at Steve’s Guitars in the afternoon to hope that the event hasn’t sold out, and buy your ticket to win the contents of the most mysterious safe in Carbondale.

When: Music and artifacts displayed at 3 p.m., costumed readings from memoirs of early pioneers at 3:30 p.m., drawing at 4 p.m. and safecracking at 4:15 p.m.

Tickets: $10 at the Carbondale Historical Society booth (and by peddlers in the park) at Potato Day, as well as at the door.