The mussel matter at Ruedi Reservoir 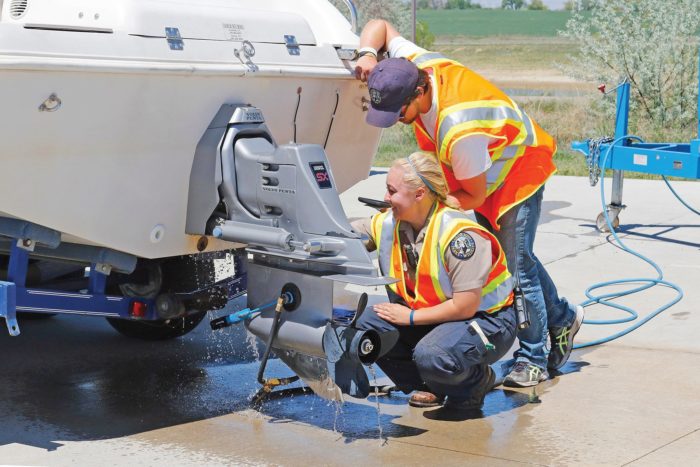 This past June, Ruedi had its first ever run-in with some aquatic hitchhikers. Inspectors stopped two watercraft (both of which had come from Lake Powell) infested with quagga mussels from entering the Reservoir. A total of 47 boats contaminated by the Aquatic Nuisance Species were intercepted in Colorado this year, according to Colorado Parks and Wildlife.

Mussels — such as zebra and quagga — are infamous for hitching rides into bodies of water via boat propellers and hulls. After attaching themselves to these vessels and successfully making it into the water, they start producing offspring and form into massive colonies, usually ranging from 300,000 to 1,000,000 individuals per square meter. These dense colonies are attracted to hard surfaces such as rocks and water intake pipes, and their prolific presence not only reduces intake volume and pipe flow, but can also clog up an entire water pipe and other water infrastructure, resulting in complications with irrigation and hydropower generation.

“Once they make their way into a body of water, it’s nearly impossible to get them out,” says Rob Walters, Invasive Species Specialist at Colorado Parks and Wildlife. “A single mussel can produce up to a million offspring in one spawn, and they can also cause millions of dollars in destruction.”

For Ruedi, a mussel infestation would not only limit recreational activity, it would also interfere with the hydroelectric works below the dam that enable the two leases of water— designed to help different downstream fish populations in the Colorado and Fryingpan rivers — approved by the Colorado Water Conservation Board this past July.

The team of workers who handle operations at Ruedi include the Aspen-Sopris Ranger District branch of the U.S. Forest Service, White River National Forest Recreation, Ruedi Water and Power Authority, Colorado Parks and Wildlife and the Bureau of Reclamation.

Colorado Parks and Wildlife is responsible for sampling Ruedi’s water once a month for the Aquatic Nuisance Species. The Ruedi Water and Power Authority also works to keep the Reservoir mussel-free through the implementation of their ANS Inspection program.

Every boat that goes for a ride in Ruedi is inspected both prior to entering the water, and after, according to Amy Long, Director of Ruedi Water and Power Authority. The boats are also tagged to clarify that their last location was in the Reservoir. Ruedi saw 4,797 water vessel inspections this year, according to Colorado Parks and Wildlife.

“We really work on raising public awareness of Aquatic Nuisance Species, but it’s also the inspectors’ job to educate the boaters on how to properly clean their boats and keep them mussel-free,” says Long.

This past April the state passed the Mussel-Free Colorado Act, which provides $2.4 million for the ANS Program for 2019 and beyond. Thanks to this funding, Reudi Water and Power Authority was able to hire more inspectors this season and extend the hours of operation for the boat ramp from 8 p.m. to 10 p.m., per the request of the boating community. The ramp will be manned with inspectors during all hours of operation till the end of October.

However, even with the recent increase in funding, the financial stability of the ANS Program is not quite where it needs to be in order to thoroughly handle such a consequential and large-scale situation like mussel containment, says Long.

As for the coming months when boating season takes a break, Ruedi staff will work on planning and preparing for the next season.

“We’ll spend a lot of time in the winter working on what we can do with the ANS Program, and figuring out the funding piece,” says Shelly Grail Braudis, Recreation Staff Manager for the Aspen-Sopris Ranger District branch of the U.S. Forest Service.