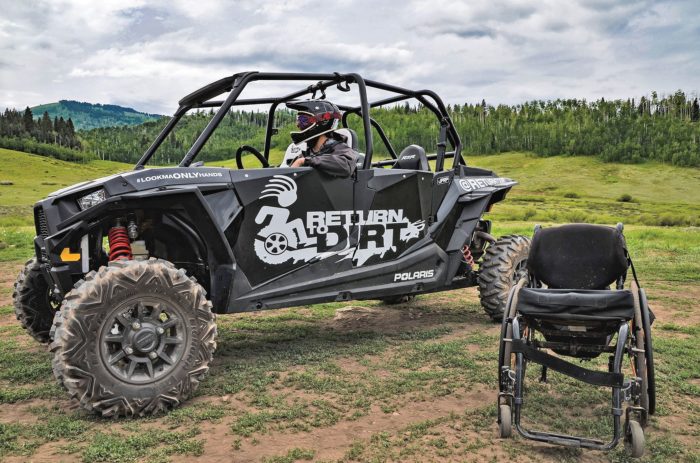 The world isn’t wheelchair accessible. You can either try to make it that way, or you can leave the wheelchair behind, says Tim Burr, founder of Glenwood Springs-based nonprofit, Return to Dirt.

“I think everybody would choose to leave their wheelchair behind because it’s the epitome of your inaccessibility. When you’re out of it and you’re in something that doesn’t have the limitations of your wheelchair, you can go anywhere you want. Just point it and go. That’s huge,” explains Burr.

In November 2014, Burr was backcountry skiing with a friend up near Kebler Pass outside of Crested Butte. He ended up in an “unlucky, slow-moving crash” that broke his neck at the C5 (fifth cervical) vertebrae and left him paralyzed from the chest down. Burr describes his injury as a “textbook C5” in terms of sensation and motor movement; he’s able to use half of his shoulder and arm, but nothing below that. His biceps have full movement, but his triceps are one hundred percent paralyzed. He can flex his elbow with full strength but can’t extend it against gravity. His deltoids are strong and he can lift his arms up, but struggles with lowering them back down.

After his accident, Burr spent the next three months working through rehabilitation therapy at Craig Hospital in Englewood before returning back to his home in Glenwood Springs. He started driving again about a year after getting out of the hospital, and after taking his adapted four-wheel drive pickup truck out for rides, he was hooked on the independence it fed him.

“It was the first thing since my injury that I could do as an activity one hundred percent individually,” Burr says. “Once you’re in a vehicle with some modifications and adaptations that work for you, then you’re controlling where you’re going and how fast you’re going without anybody else’s help or intervention. I don’t need to go anywhere specifically or do anything crazy, it’s just the activity of freedom.”

That’s when he thought up the idea for Return to Dirt. Most of the people he knows with impairments are either not driving or are in mini vans or Sedans for practicality reasons in terms of getting around every day. But the downside is these vans aren’t practical for getting out to wilderness destinations. And without the ability to run, bike or hike, most outdoor get-away spots are inaccessible for people in wheelchairs. Or they were, until Return to Dirt took action.

With the mission of “providing equipment and instruction for individuals with disabilities to pilot off-road vehicles into backcountry areas otherwise impossible to access because of a mobility impairment,” Return to Dirt defines their organization as an “adaptive motorsports program that puts disable individuals behind the wheel of their own adventure.”

How it works? They take off road vehicles — like an RZR Polaris Side-by-Side — and reconstruct them with a broad uniform base of adaptive controls and equipment. The vehicles are outfitted with hand controls, custom seats to keep riders stable and comfortable, a five-point harness system to ensure safety inside the vehicle, a roll cage, as well as three different steering adaptations and handle options, all of which accommodate a wide range of disabilities. Helmets are provided for all athletes, and each ride begins with an extensive safety talk as well. The Return to Dirt guides are trained and able to assist with driving from the passenger seat in case of an emergency.

After getting acquainted with the vehicle, its adaptations and how it drives, the athletes can direct themselves wherever they want to go and do exactly what they want to do. The options are endless, he explains. Whether someone wants to get to high country or the desert, Return to Dirt can make it happen. And the activities are endless too.

And off-roading is particularly special to Burr, because it’s the only adaptive sport he’s found where people with impairments can compete on the same playing level as those without impairments.

“The world’s best Paralympic skier wouldn’t be anywhere near competing with the world’s best able-bodied skier. But theoretically, if you have the skill and coordination and you’re put behind the wheel of a vehicle that’s adapted correctly for you, you could drive better, faster and more comfortably to gnarly-er places than another able-bodied driver. It’s based on your skills and tenacity more than it is on your strength levels,” he explains. “That means a lot to me, as far as when I go out with my friends and we’re all out in the vehicles together. You’re no different behind the wheel than the next guy. Everybody has the same vehicle limitations together.”

Burr and the R2D team submitted their article of incorporation this past December, worked through the process to obtain nonprofit designation, fundraised and partnered up with local companies like Xen Technology Group, and took their first athlete out for a spin in June. They took ten athletes out in total this past summer, and according to Burr they haven’t had anyone come back from a ride who didn’t want to go again.

Adam Lavender, a Carbondale local and recovering C4 quadriplegic, went out for a Return to Dirt ride with Burr this past summer and explains the experience as “super fun and exciting because for someone who has these injuries, you can go so much faster through bumpy terrain without it rattling you to pieces.”

“Being a spectator comes easy when you’re in a chair,” he continues. “As many opportunities as there are to be a spectator, that’s how few there are to actually be involved and engaged. But these vehicles help bridge that gap from getting the excitement I used to get on self-propelled machinery like a bicycle or my own feet on a snowboard. It’s re-creating the experience, the excitement and the thrill without having to imitate something else that you used to do. And every minute you spend doing something like that, when you’ve spent so many hours in a chair, is so valuable and so empowering.”

Moving forward, Burr’s main goal is to develop the resources needed to extend this experience and adventure to as many people as possible, more efficiently. Next season, they want to up the number of athletes they take out to 25. With everything — the supplies, time and labor— that go into a project like this, streamlining the process is key, explains Burr.

“What we do as an organization is make it so that somebody can show up with no gear and no prior experience and feel comfortable and accommodated in any situation,” says Burr. “Part of what is so impactful for myself and the athletes we share this with is that we’re the solution to the problem of the inaccessibility of the wilderness. But rather than solving the problem by making the wilderness accessible, we’re making ourselves unimpaired.”