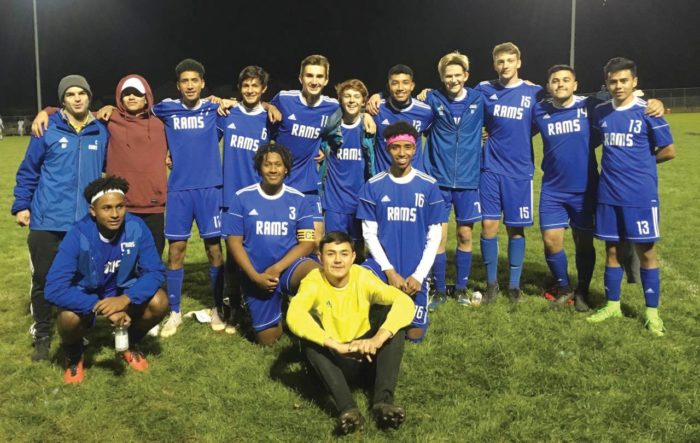 For the first time with this set of students, the Roaring Fork Rams are the top soccer team in the league thanks to a 2-1 victory over Coal Ridge on Oct. 18 and Basalt’s loss to Delta the same day.

If they continue to win, the Rams will play their next three games at home. If not, well…

“That’s the end of the season,” Forbes said. “It’s winner take all from here on out.”

Senior Ronald Clemente is looking forward to hosting instead of traveling all over the state.

“Last year, it was back and forth every few days,” he said. “This year we’ll get to relax — and hopefully a lot of fans will show up.”

Still, the team won’t be able to rest on its laurels, as an overtime loss to Basalt proved earlier in the season.

It was a bitter pill to swallow,” Forbes said. “But we kind of rode out a slump at the end of the season and still won the games we needed to.”

Now, the Rams will have to be at their best as they prepare to host 29th-ranked Valley High at 5 p.m. Oct. 25. Aspen, Basalt and Coal Ridge will all face higher-ranked teams in the first round, leaving Roaring Fork and Delta as the Western Slope’s most likely contenders as the field narrows on Oct. 30 and Nov. 3. If the Rams make it that far, they’ll be traveling to neutral venues on the Front Range for the semifinals on Nov. 7.

That’s as far as they’ve ever made it, but Forbes has high hopes. The current seniors came in as freshmen the year after Roaring Fork’s last league title and have had plenty of time to practice.

“It’s the same team we’ve been building since they were freshmen,” Forbes said. They’re super ready.”

With a 2-6 league record, the volleyball girls probably aren’t looking at a postseason, but they still have a few games to play, with an away game against Aspen on Oct. 25 and the Buena Vista Tournament on Oct. 27.

The JV football team, meanwhile, will host Gunnison — the other school to drop varsity this year — at 6 p.m. Oct. 26 under the lights.