Lee Ann Eustis stepping back, but not aside 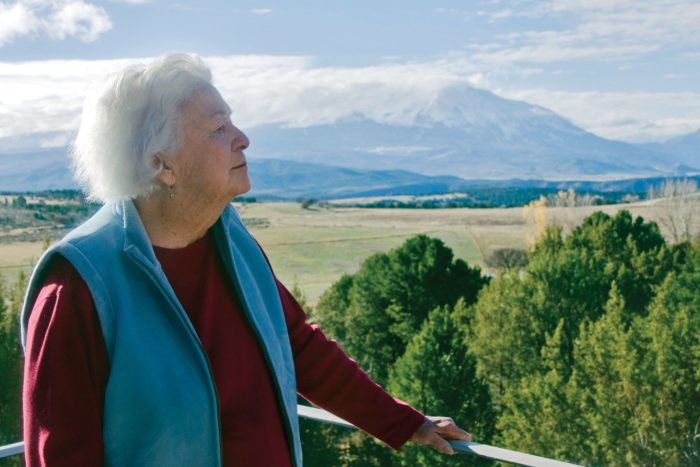 After more than half a century of contributions to Carbondale, Lee Ann Eustis is ready for fresher minds to take the wheel. Luckily, she’s not going anywhere — as your friends would tell you, she’d be impossible to replace.

“Everything she addresses, she does it from the standpoint that it matters,” noted friend and renowned pianist Robin Sutherland. “She has boundless personal energy. There are so many threads and from their joining comes that fabric, which is hella strong. When you run into someone like that, stand back because things are going to happen.”

In many ways, it’s a stroke of luck that she ended up here at all. Lee Ann, neé King, was born in Philadelphia in 1935 to a prominent family and raised mostly by her aunts and uncles. Her mother had eloped at 18 and divorced at 19 before marrying later in life. Lee Ann’s own rebellion came after she began studying English at Vassar.

“I came home with tons of different ideas and let them be known,” she recalled. “My friends really worried about me being an old maid because I didn’t have an engagement ring when I took my diploma.”

She worked in the advertising business for a while, but couldn’t handle the falseness of it all. So when her father gave her some money, she used it to spend the better part of a year travelling through Europe — something unheard of for someone of her station and era.

“That really really changed me,” she said. “I wasn’t going to be back to Philadelphia.”

Instead, she moved to Washington D.C., where she got to know George Eustis’s mother and, ultimately, George himself. A wildlife biologist, he was a novelty in the capitol crowd, and smitten with her to boot.

“Anybody looks good after working with bighorn sheep for six or eight weeks,” she joked.

After two years of long distance romance, they decided to marry and make a life together — in Yuma, Arizona.

“You didn’t move away west of the Mississippi. You just didn’t do it,” Lee Ann explained.

By a twist of fate, they ended up in Monte Vista, Colorado instead, with George working on a wildlife refuge for sandhill cranes. That’s where their daughter, Leslie, was born premature — taken with a police escort over to Children’s Hospital.

After a brief sint in Fort Collins, George got an offer from Colorado Rocky Mountain School to teach. Their son, Evan, was four days old when they made the move to Carbondale.

It was 1965, and John and Anne Holden had been perfecting their own brand of outdoor-focused, all-around education on the old Pabst Ranch outside of town for a little more than a decade.

“I think the reason there was a foothold to be gained in the community is because the Holdens put it there,” Sutherland noted. “CRMS became the beacon.”

It certainly seems to have been the cornerstone for the Eustis family. Lee Ann taught, coached and soon became as invested as George.

“It was very definitely about the complete person,” she said. “You didn’t have a spare moment. Everything involved the students.”

They found more independence after moving off campus, eventually ending up with a sprawling, then-remote property on Missouri Heights.

Lee Ann began to look for the kind of cultural opportunities she had enjoyed back home.

“I was always begging to go to Denver,” she recalled. “We’d try something — culinary arts or a craft’s fair — during the summer. There weren’t all these nonprofits like there are now, but I was on as many boards as you could be.”

She was instrumental in starting up Mountain Fair and helped build the Arts Council into a prominent organization with a full time director. They brought in plays — sometimes at the CRMS barn, sometimes at the Crystal Theatre — and tried to bring the boarding students into the community. It all came back to education for Lee Ann, whether it was forming a foundation or helping expand Aspen Country Day School.

Then, in autumn of 1978, everything changed.

That’s when Lee Ann returned from an Arts Council meeting to find George dead. Her kids were 12 and 14.

“I don’t know how I got through that first year,” she said. “I took care of myself and the kids alone for a long time.”

That wasn’t lost on Leslie.

“I think it’s very difficult to be a woman alone, but mom held in there,” she said. “It’s a good honest triangle of love, and I give her a lot of credit.”

Despite pressure — and some temptation — to move back East, the family stayed in Carbondale and involved with CRMS.

“It was where they landed, it’s where she started her family, and then it gave her purpose after dad died,” Leslie said. “She was one of those strong women I grew up with that kind of these strange amphibians of Ivy League educated people who chose to be out West. She could compete with the Aspen crowd but liked being downvalley with the ranchers.”

“It was a whole new world that George exposed me to,” Lee Ann said. “I loved the fact that I had friends of all ages that make me feel alive.”

It’s not quite the town it used to be, but while at 83 she’s not a huge fan of change, Lee Ann is rolling with the punches.

“There’s something to do every single night. I have to make a choice,” she said. “I have been enjoying life and I want to continue to.”