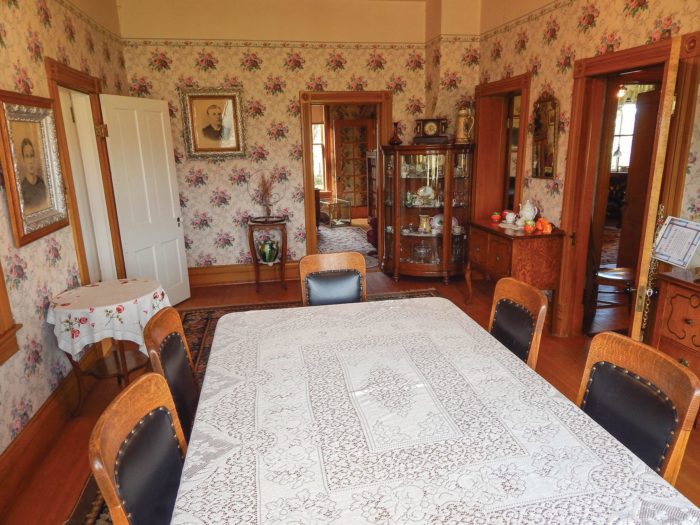 There are only an estimated five historic homes in America that contain a full collection of the very possessions that once belonged to the original residents. Carbondale’s Thompson House, which was added to the National Historic Register in 2013, is one of them (Thomas Jefferson’s Monticello is another).

While most people tend to get rid of “old stuff” and modernize the look and feel of a home after they move in, Hattie Thompson’s relatives chose to leave the property intact — filled with Hattie’s possessions that give us a detailed glimpse into pioneer life in Carbondale, as well as providing clues to the character of this larger-than-life woman who defied conventional stereotypes.

I met with Carbondale Historical Society board president Sue Gray, who enthusiastically walked me through the Thompson House. It’s hard to imagine now, but when the home was built in 1885 as a wedding present for young Hattie Thompson by her father Myron, it was surrounded by open land.

Carbondale was only a few hundred residents strong, and most were strung along the valley working cattle and harvesting crops with few comforts. In the early years of homesteading, the Utes still hunted in the Roaring Fork Valley. With a quaint but sturdy one-story home to anchor them, Hattie and her second husband Oscar Holland put their energy into developing the Pleasantview Ranch, which grew to a profitable going concern.

“People came for the mining and stayed for the ranching,” Gray told me, “because they found this valley ideal for growing crops and raising cattle.”

As their wealth grew so too did the Thompson House. A second story and open porch was added around 1895 (eventually, that porch would be glassed using materials purchased from the Osgoods, sourced from the greenhouse at the Redstone Castle).

The property became the scene of extravagant parties and a hub for pioneer society. Looking at the large electric Victrola, piano, and ornate leather furniture in the elegant parlor, I could just picture the scene — only the more well-to-do neighbors’ carriages travelling for hours, maybe even a day or two, through a still very much wild mountainous landscape, to congregate at this warm outpost of social and familial jubilance. Their horses would pull the carriages to the porch entrance, where the animals could water briefly before being provided overnight accommodations of their own. I imagine elegantly dressed, sophisticated-yet-country-rough friends might stay for a few nights, dancing to music, playing cards, telling stories in this joyful place that offered a sorely need change of scenery to the plowed fields. They must have sucked every minute of glee from these rare social opportunities.

“Because ranch houses were so far apart, when they had social events, people would often come in their wagons to the house to have a party and stay for two or three days,” Gray informed me.

Walking through the house is, of course, like walking through any museum, but the Thompson House carries a distinct and exotic feel to it. It is not an old home sourced with period pieces from around the country to mimic the effect of a real pioneer domicile. This was clearly somebody’s treasured home. Everything (and there are a lot of things!) is in its right place.

After Hattie’s husband Oscar took his own life in the carriage house in 1920, she travelled extensively to far flung locations: Egypt, Hong Kong, Cuba, Morocco, and Merry Old England. It would have been rare enough for a man of that day to have the resources and willpower to board trains and steamships for prolonged intercontinental travel. But for a woman in her fifties, and one who made her fortune by ranching in western Colorado, to venture to international destinations is remarkable.

The Thompson House is less a museum than it is a material reflection of Hattie’s life.

“We don’t know a lot about her personal life,” Sue Gray told me, “but we can deduce her character from the items she cherished and collected and kept in her house. For her time, she was a very unusual woman. She was worldly, not a country bumpkin. Very educated and interested in the affairs of the time. She was involved in the community as well as the day-to-day ranching operations.”

While I could go into detail here of all the treasures contained in the house, it’s a far better policy for you to see for yourself. The Thompson House recently finished thousands of dollars of renovations and cleanings in part with help from History Colorado. The house is owned and maintained by the Town of Carbondale, and the historic goods contained inside belong to the Historical Society, which is also in charge of organizing tours and other public events.

According to Gray, the Society plans to open the Thompson House for public tours every other Saturday for four hours (details are still being fine-tuned) starting in December. Additionally, there will be a public cocktail party, also in December, to re-introduce the community to this unique resource. “The house will be available to rent for events, meetings, reunions, weddings, and birthday parties,” she said. “Most people don’t even know it’s here, or what it is, or what’s inside of it. We want to introduce it to the community.”

More information about the Carbondale Historical Society and the Thompson House are available at carbondalehistory.org.