Boys’ soccer team reflects on friendship ahead of semifinals 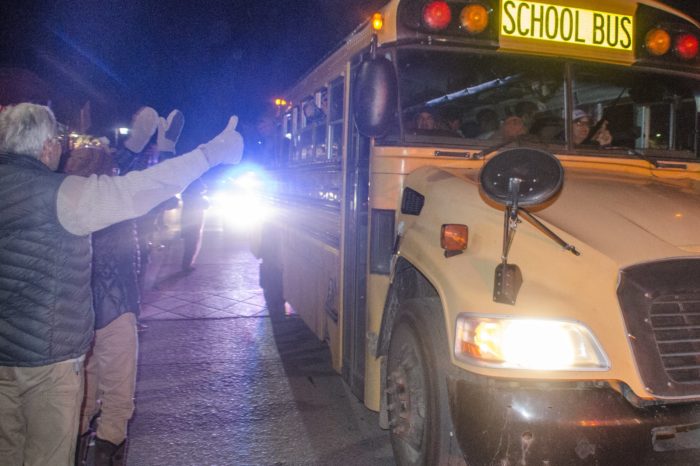 Update: The Rams fell 2-1 in penalty kicks to Liberty Common in the semifinals.

Despite temperatures in the high 20s Tuesday evening, about 100 or so Carbondalians gathered at Fourth and Main Streets to cheer on the Roaring Fork High School boys soccer team as they departed for their first-ever semifinals game in Englewood. It was quite the spectacle: there was even a dancing Ram mascot. The street lit up in blue and red from the police escort, and players hung from the school bus windows to wave and shout to their fans.

Soccer is enjoying a moment in Carbondale. By all accounts, attendance is up at games, and it was the boys soccer team that played under the lights for the homecoming game this year.

“It’s an honor, I think, to be able to represent Carbondale in such a big platform,” RFHS senior Ronald Clemente, who plays stopper, said about being in the state playoffs.

But while the fervor around the soccer team may feel rather sudden to newer fans, for seniors on the team, it’s been more than a decade in the making.

“This was our 11th year together. We started when we were six years old,” said senior Aidan Sloan, striker. “We just started to realize that as we are all seniors, that it’s going to come to an end here shortly. So it’s very interesting. It is bittersweet; hopefully we can end it on a good note.”

On Wednesday, Nov. 8, the Rams faced off against Liberty Common in neutral Englewood. The game occurred after press time (though we’ll update you online). If they won, Roaring Fork High School will move on the championship game on Saturday, Nov. 10. If they lost, they’ll return home. But either way, they’ve solidified their legacy in their hometown.

Of course, that’s not quite how many of the boys see it. Sure, they’re excited about how far they’ve come, but they’re playing to win.

“We have had some communication errors between our midfield and our defense and all the positions, so [we have been] just working with that and the coaches,” Sloan said about the rigor and focus of recent practices.

And they’re taking with them the lessons they’ve learned from the season.

“Basalt beat us in double overtime on a great shot — which was so horrible,” Sloan recalled. “It was a great game for them, I’ll give it to them.”

Fellow senior Max Candela, sweeper, buried his face in his hands at the memory.

“I guess it was frustrating for us because we had the lead! We came into the game just playing our game,” he lamented. “We were winning 2-0 for a half, and then they caught up off our mistakes. We came in too cocky for the second half.”

They won’t be making that error again, they all concurred.

“Just not be too confident, just stay composed and finish out the game,” goalkeeper Leo Loya reiterated before laughing a bit. “For me it’s hard, cause I’m the goalie. I guess the one in Basalt, I’m pretty sure I could’ve had a hand on it, but it was a good shot!”

The fact that they can learn from their mistakes while simultaneously laugh about them reflects the cohesiveness of the players that comprise the team.

“We’re basically family, we’ve been playing with each other for so long,” Clemente said. “Knowing that within a week, it’ll be the last day playing together, it’s definitely bittersweet. I don’t know… we’ve had a good run, I think. We’ve definitely gotten closer as friends.”

At that, Sloan, Candela and Loya shook their heads in emphatic agreement.

Wednesday’s semifinals might have marked the end of an era for the seniors on the team, or they might have lived to fight another day. If Tuesday’s show of support is any indication, they’ll come home as local heroes, regardless.