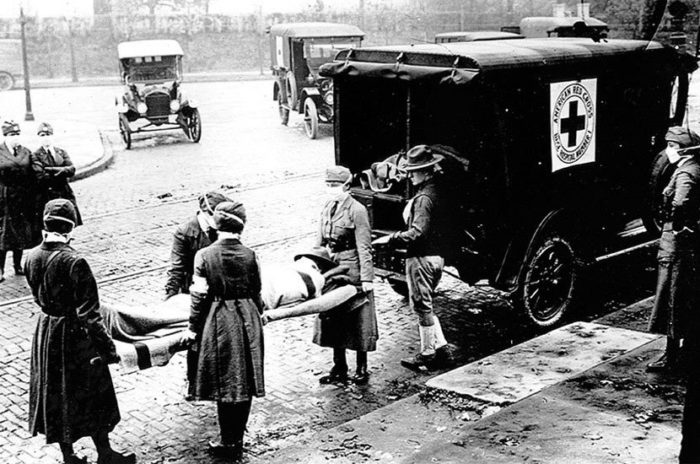 As talented as humans are at destruction, Mother Nature has us beat.

On Nov. 11, 1918, the world celebrated the end of the War to End All Wars, blissfully oblivious of the century of even greater bloodshed that awaited them. And as civilians flooded into the streets and the troops began shipping home, “The Spanish Lady” was waiting for them.

For more than a year, a particularly virulent strain of influenza had been steadily making its way through remote villages and mining camps alike. In an eerie echo of the war itself, it was stoked by advances in technology — like fast, global transportation — that the rest of society hadn’t caught up with. It was also deliberately not publicized heavily for fear of weakening morale, except in neutral Spain. It thus gained the “Spanish” moniker even though it appears more likely that it started in China, France, or even Kansas.

By autumn 1918, however, it was beyond keeping secret. The online Colorado Historic Newspapers database records nearly 2,000 mentions of the word “flu” in the last quarter of 1918.

The Halloween edition of the Glenwood Springs Avalanche Echo recorded seven deaths from the flu. On Nov. 7, there were a dozen more, ranging from toddlers like Irene Wirth to young adults like Katie and Victor Gregori to 52-year-old John Bear, who, being something of an institution, was regarded as a particular shock. The Glenwood Post would later attribute the town’s relatively low death rate — discounting those who came to town already sick — to its healing waters.

On Nov. 12, the Aspen Democrat-Times reported 47 deaths in 21 days, and laid the blame at the health department’s feet.

“Down in Carbondale, just as soon as the flu showed up, the town council put on the lid and are keeping it on. No one is permitted to go into or leave the town, no visiting is permitted under any circumstances… The result will be that they stamp out the Flu in Carbondale in short order,” it read. “Here in Aspen we permit promiscuous visiting back and from sick homes as well as well homes without thought of fumigation.”

Those exalted measures were insufficient to prevent A. Moore, editor of The Carbondale Item and son of oldtime Colorado newspaperman and Senator Frank Moore, from succumbing to the flu on Christmas 1918.

Gunnison, however, took it a step further and has since become something of a model for social distancing methods, with the University of Michigan identifying it as one of seven “escape communities” that escaped almost unscathed from the otherwise indiscriminate plague, calling the county’s efforts “one of the most ambitious and successful protective sequestrations” in the nation.

According to a recent story in the Gunnison Country Times, the County closed all schools and churches in October before a single case was reported in the area. Major roads were barricaded at the county line with anyone allowed to leave but no one allowed to enter without quarantine — with some violators arrested on the spot.

It seemed to work, particularly in contrast with Silverton, where a complete lack of prevention and a plethora of existing lung problems led to 833 cases and 125 deaths.

“A lot of it came down to how communities managed the epidemic…” noted Colorado State Epidemiologist Rachel Herlihy. “People’s liberty is potentially sacrificed, but social distancing measures only work if they are consistently applied.”

In 1918, germ theory was relatively new and viruses impossible to detect. While many flu victims developed secondary bacterial infections that actually claimed their lives, the health professionals of the time were unable to understand, much less treat the underlying epidemic.

“We’ve discovered influenza since this pandemic, which is obviously quite helpful,” Herlihy observed.

As scientists have developed and improved the flu vaccine, there have been efforts to isolate the 1918 strain to better understand what made it so deadly.

“This virus had particular affinity for lower respiratory which is more likely to cause that pneumonia,” Herlihy explained.

It likely began in wild birds before spreading to domestic fowl and eventually humans — a pathway officials are keeping an eye out for in the future. It also benefited from an immune quirk known as “original antigenic sin.”

“Most of your training for your immune system in general and influenza in particular occurs when you’re very young,” Herlihy said. “We think it triggered the wrong immune pathway.”

Specifically, it seems that those who were between 20 and 40 years old in 1918 were exposed to a different strain in childhood that confused their immune system into actually performing worse than if they hadn’t been exposed at all. As such, while the flu is usually the most dangerous to the very old and very young, it was adults in the prime of their life who were most likely to succumb.

The vaccine, by contrast, contains an ever-changing mix of different strains intended to offer as much protection as possible without backfiring. It’s one of many reasons there’s a new one ever year.

“We will always have new influenza strains that emerge,” Herlihy said. “The universal influenza vaccine is sort of the ultimate goal.”

Meanwhile, she encouraged everyone to get vaccinated regularly, wash their hands frequently, stay home when they’re sick and take medications as directed. Because even in a light season like the last one, 4,650 people were hospitalized from the flu statewide, and every little bit helps.

“We can slow down a pandemic, which buys us time,” Herlihy noted.