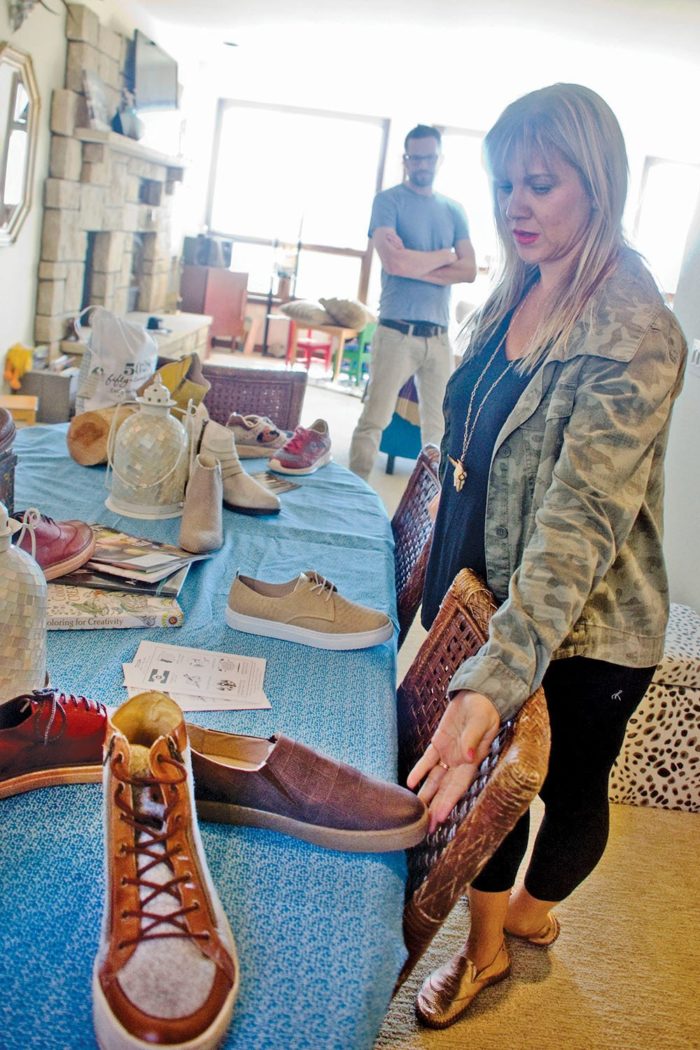 Where’d I get these limited-edition Iberian leather shoes? Right here in Carbondale, of course.

Or, at least, from the 5028 “warehouse” in Angilina and Mike Taylor’s garage just up the road. The fledgling shoe company just debuted another run, and you might have seen them out peddling their wares at Mountain Fair, Green is the New Black and The Way Home’s Harvest Fest. Next, they’ll be doing pop ups at The Launchpad for Deck the Walls from 5 to 8 p.m. Nov. 16, 3 to 5 p.m. Dec. 22 and noon to 5 p.m. Dec. 23.

They’re well aware that this isn’t the spot most entrepreneurs would choose for such a venture.

“Obviously it’s unusual to have a shoe company in the mountains, but for the most part it works,” Angilina said. “We would just be hidden in an urban environment.”

Not that it was always the plan. Angilina grew up in Santa Barbara, where her grandparents ran a longtime (non-shoe-related) business with an address that gives 5028 its name. (There’s some occasional confusion with “mile-high” 5028 references, but they think it’s worth it for the personal touch.”

“I hung out with my grandmother a lot and she’s a big shopper, so that’s how I got into fashion,” Angilina noted. So she studied fashion and spent 15 years working in the corporate industry.

Mike, who hails from New York, was more into basketball shoes than high fashion growing up, but a few years after the pair met at a jazz festival, he pitched the idea of starting their own company to honor a friend. The time wasn’t right, but the idea lingered when they reconnected years later and began to date.

“It was always in the back of my mind to do my own thing,” Angilina admitted. “Nowadays, the shoe industry is mainly in China, and they want designs that could sell 10,000 pairs. I like to go out and be inspired by a building or a tree and infuse that into my design to come up with something different.”

When Mike moved to the Valley, she began visiting him.

“I would come out here and feel an easier pace of life,” she recalled.

And when the time came for them to make a place together, they eschewed the opportunities of the city and opted for the small town life. The company she was working with at the time allowed her to work remotely, albeit with frequent flights to Europe. Despite the dominance of Chinese mass production, some of the traditional craftsmen in Europe were still doing their own thing.

“She’d come back from these trips with these shoes for me and people would ask where I got them,” Mike noted.

Inspired, the Taylors decide it was time to make the leap. They went through the GlenX pitchfest process but didn’t get funded, so they decided to do it anyway.

“We just spend our savings and sort of wing-and-a-prayered it,” Angilina recalled. “I flew to Spain and Portugal and literally went around knocking on doors.”

Now, instead of designing for 10,000 pairs, she’s doing runs of less than 100. Typically, there’s a men’s and a woman’s design with a common name and theme. Originally, the idea was to have each one sold before they were even ordered.

We wanted people to come along the journey with us and go directly to the consumer so the prices don’t have to be astronomical,” she explained. “It’s not made for your foot but it has a home.”

Now, though, they take the risk on a limited run — say, 55 — with a special price for preorders. That saves them from having to landfill brand new shoes like bigger companies do if a design doesn’t sell. Angilina has even taken to working with “dead stock” — leftover leather of no use for big lines.

“It kind of drives them nuts, but it’s all stuff that wouldn’t be used otherwise,” she said. “We’re trying to eliminate waste as much as we can.”

But while they’re thinking globally, they’re acting locally. $5 from every purchase goes to Aspen Strong’s mental health support efforts, and they’re hoping to find a national organization to back as well. And they’ve gone out of their way to add a personal touch to their local dealings — a stark contrast to the web platform.

“We took a trip to Austin and it tanked. Then the next weekend we had a show in Boulder and we crushed it,” Mike said. “People like the local stuff.”