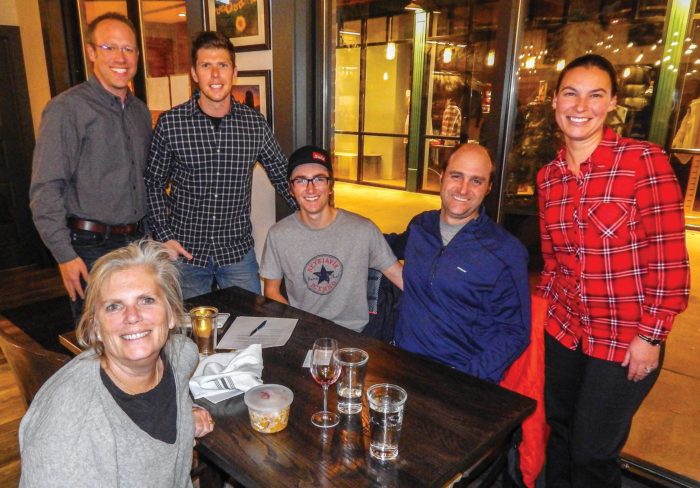 Diners at Free Range Kitchen & Wine Bar in Basalt on Nov. 7 were surprised and delighted to discover that their tabs were being picked up by FirstBank as part of an awareness campaign for Colorado Gives Day (coming up on Dec. 4).

Instead of handing them a bill for their meal, bank employees posing as servers presented patrons with a square placard that read “Please accept this act of kindness, on behalf of FirstBank, and consider “giving it forward” – even if it’s just $10 – to a charity you care about for Colorado Gives Day.” The promotion at Free Range was one of many carried out by FirstBank demonstrating random acts of generosity at restaurants statewide to urge participation.

Reactions from diners were overwhelmingly positive. “I like that strategy. It’s very generous. Let’s go FirstBank!” said a woman who had placed an order for takeout.

“It’s a great thing to do to encourage others to give back to their community,” said a Basalt local after walking out of the restaurant without paying for his meal.

“It stimulates the whole idea of philanthropy,” said another. “Yeah, it’s great that we got a free meal, but now we can use that money to help someone that couldn’t even afford to eat here. What are we doing to give to someone else? It makes you want to pay it forward,” he said.

Tim and Sarah McMahon were frequenting Free Range as part of the couples’ much anticipated date night. With a babysitter at home watching their two young kids, the McMahons were hoping to sneak out for a couple of hours of alone time. Having their meal paid for “was a special treat. It adds to the flair,” said Tim McMahon.

Ginni Galicinao, a philanthropy consultant who happened to be eating at Free Range Wednesday night, was especially impressed. As one of the original leaders of a local strategic nonprofit fundraising group, Devo, she helped introduce Colorado Gives Day to the Roaring Fork Valley nonprofit community several years ago.

“I thought it was lovely,” she said. “The part I really like about it is you go on [to the website] and find out about all these other nonprofits doing fabulous work and you didn’t even know who they are. Maybe I’ve never heard of them but you can tell from reading their bio they’re doing great work. Kudos to FirstBank for doing this. Maybe I’ll give a little more because of what they did.”

“It’s been wildly successful. It’s been fun watching people’s faces — their shock, surprise, and gratitude evolving on their faces. But also the deeper connection of the why, seeing them connect the reasoning. We want them to understand why we’re here, and have them pay it forward.” Two years ago, FirstBank bought groceries at local supermarkets to promote the campaign and last year purchased 500 tanks of gas, he said. This year, they decided to try restaurants as their platform.

Matthias explained that over 2,300 nonprofits are participating in this year’s Colorado Gives Day. The campaign has raised over $181 million dollars for nonprofits since its launch in 2010. Last year, a record $36.6 million was raised. FirstBank is the primary corporate sponsor, but other major companies including Comcast, 9News, and 5280 Magazine also participate.

The bank waives merchant fees for credit card transactions for donations and offers matching funds and incentive funds to help nonprofits maximize the experience. “Colorado Gives Day is an annual statewide movement to celebrate and increase philanthropy in Colorado through online giving,” states the website.

“It continues to build on itself,” said Matthias. “It turns into this catalyst for new funding sources and new relationships. The dollars are great, but it’s those relationships and connections that really carry the weight in this valley,” he said.

Free Range’s owners, Steve and Robin Humble, were also pleased with all aspects of Wednesday’s giveback. Steve Humble explained that it was always a part of his vision “to be a community-based restaurant.” Every Thursday, the restaurant hosts a guest bartender whose tips go to a local cause. Basalt High School football, Ascendigo, and WindWalkers, for example, have benefited. “The charity wins, we win. It’s a good vibe. It was crazy busy. It was fun. The feedback from the customers was amazing.”