Seeing is believing — in a cause 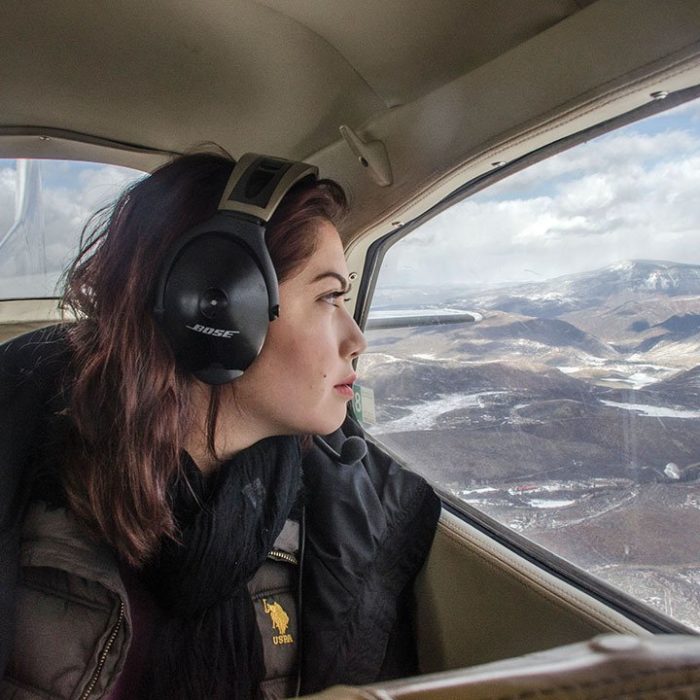 When it comes to teaching people about the big picture regarding public lands stewardship and conservation, the EcoFlight crew believes in showing instead of telling.

“We take different stakeholders up in the air to educate people, give people a better understanding of public lands and landscapes,” EcoFlight Program Coordinator Michael Gorman said. “And also hopefully inspire them to become more engaged once they’ve become a little more educated and have that experience with the landscape that’s unique and intimate in a way that’s different than being on the ground.”

Sometimes, those stakeholders are elected officials or conservation groups. On Tuesday, Nov. 6, they were high school students — or, as Gorman referred to them, “the next generation of public lands managers and decision makers.”

It was a fitting coincidence that EcoFlight was busy touring students in the air during Election Day.

“I think it’s important to share this experience with them. Just having that deeper understanding [will] hopefully give them the confidence to speak out about what they know and what they think about these lands. It can be really powerful,” Gorman said, citing the recent undeveloped oil and gas lease cancellations in Thompson Divide as a victory for environmental grassroots efforts. “Today, they’ll get to see a little of Thompson Divide. And that’s just such a cool example of what can happen when citizens get together and start organizing.”

It’s a message not lost on Spencer Ellsperman. The 17-year-old senior at Basalt High School can’t legally vote yet, but when he does cast his first ballot, he’ll remember his aerial experiences.

“It’s really intriguing that people who’ve never experienced wilderness or mountains at all and live in the city can make decisions about the future of that,” he reflected. “So it’s obviously really important that they’re enlightened about that. You can just only hope that everyone gets involved in just helping them understand the importance of how people who live here think about it; it’s really a different mindset. Growing up here especially, you get a full understanding of how great it is to have public lands. A lot of the country just doesn’t have that, so we’re super lucky.”

Of course, one half-hour flight won’t equip passengers with an exhaustive knowledge about the landscapes they viewed. That’s why EcoFlight partners with youth-specific entities for their student programs.

“We’ve been working with them for several years now,” said John Brassier of the Buddy Program. “It really ties well into our public land management curriculum that we do. We talk about how public lands are managed and all the different factors of that and the problems associated with all that. Ecoflight is wonderful in helping us with that, and it’s great for the kids to see the Valley from the air and see where they live.”

Brassier is the the senior coordinator for the LEAD program. “[It] stands for Leadership through Exploration, Action and Discovery,” he explained. “It’s a group mentoring program that… really focuses on kids 12 years and older. They a lot of times don’t even realize they’re being mentored because we wrap it all into an outdoor education package.”

For students like Madison Myers, who was a “little buddy” throughout elementary and middle school, the LEAD program offers a natural transition from one-on-one mentorship to group mentorship with her high-school peers.

“They’re trying to mix together groups, so it’s not just this age hangs out together — it’s mixing all together,” the sophomore said of the program, adding that she still maintains a relationship with her original buddy from yesteryear. “It’s just a really neat experience where you can grow your community.”

The EcoFlight partnership is just one of many facets the LEAD program exposes to students.

“They do tons of outdoor trips and backpacking,” Ellsperman said. “John hands out flyers every day about some event — they do all sorts of stuff with the community. That’s basically their goal, is to get the kids in the community involved with community service and all that.”

Land of the free

Community involvement and civic engagement are exactly the reasons Bruce Gordon founded EcoFlight. Every bit of messaging, from its website to newsletter, highlights the importance of environmental advocacy. Both the acting president and chief pilot of the organization, Gordon repeatedly emphasized that public lands are exactly that: public.

“They belong to you,” he told students as he piloted them over the Valley. He also encouraged them to vote when they’re legally old enough to exercise that right, calling it “fundamental to what makes America special, that we’re a democracy. “It’s crazy to me that anybody doesn’t vote nowadays.”

His approach seemed to resonate.

“The pilots are awesome,” Ellsperman said enthusiastically. “They give you all these lessons about the history of lands… it’s awesome.”

When the plane touched down again, there was a collective sigh.