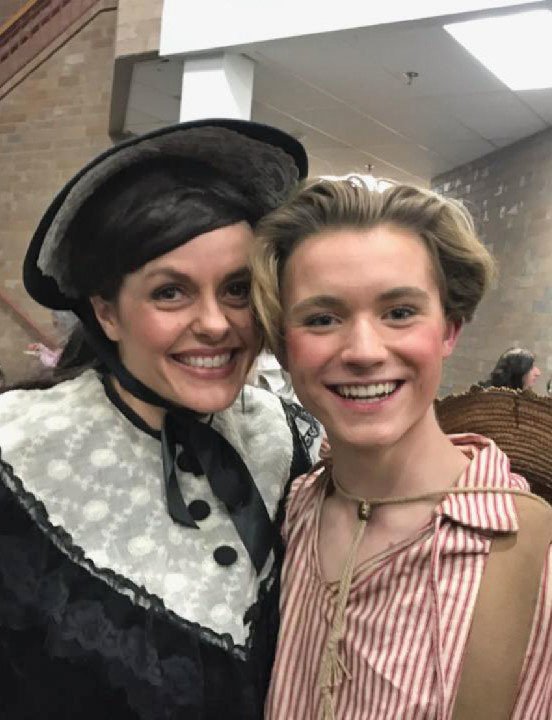 They wowed audiences last weekend in Aspen Community Theatre’s “Big River” opening, but when Patrick Keleher and Dani Kopf teared up during an interview, they weren’t acting.

“Now I’m getting emotional,” Keleher said. “I love you, Dani.”

The show runs through Sunday, Nov. 18, but that’s far from the end of Keleher and Kopf’s shared story arc.

“I actually went to [Patrick’s] fifth grade play, walked out and grabbed his dad and was like, ‘Why don’t I know about him?!” Kopf laughed. At the time, Kopf was the stage manager at SoL Theatre Company in Carbondale. She and Brian Keleher, Patrick’s father, already had a deep friendship. “I’ve known Brian my whole life, and our first show together was 16 years ago, when Patrick was two months old.”

A year later, both Kelehers were performing together in SoL Theatre’s production of the Shakespeare classic, “A Midsummer Night’s Dream.”

“And he killed it,” Kopf continued about the younger Keleher. “The whole cast did. When Patrick has an audience, he just comes alive!”

Keleher credits SoL for much of his early development as an actor, such as director Jennifer Johnson allowing him to explore and develop his improvisational propensities during “A Midsummer Night’s Dream.”

“Eventually, I kind of told myself that I had to stop pulling things out, because it was like nine things all into one,” he said. Choosing one or two techniques proved more effective. “That’s kind of what SoL taught me. That’s what most actors use; that’s the basics.”

It would be the first of several performances Keleher would undertake with the company. He later played the prince in Into the Woods, which marked another milestone — though more for Kopf than Keleher.

“That was the first show I ever directed,” she said, smiling. “That one was really special.”

Now, the two are enjoying different roles with each other. In “Big River,” for the first time in their history, Kopf and Keleher share stage time as actors, with Keleher playing Mark Twain’s Huckleberry Finn.

“There is a hugely different dynamic when you’re an actor with somebody in the show versus teacher or director or stage manager,” Kopf said. “If you try too hard to maintain that distance, then you don’t get that same experience of having a cast and having that closeness, and that’s’ been one of my favorite things about doing the show is our time together and our pre-show rituals. You’re the last person I hug before we go on stage and you’re the first person I hug when you come off stage. It’s this really beautiful bookend that warms my heart, Patrick.”

Keleher beamed, then managed a simple, “I agree.”

Despite his natural charisma under a spotlight, Keleher said that he doesn’t have an aptitude for speech in other contexts.

“I stumble across my words, and I stumble across my sentences,” he admitted. “I don’t know what it is; I just have trouble with it. When I was reading through the script, stuttering over everything, I realized that I needed to take everything into control and really focus on my speech. I’ve had more trouble learning these lines than Shakespeare. But it’s helped me a lot in real life, in speaking to people. I can tell the difference.”

Kopf, too, has noticed. They often commute together from Carbondale to Aspen and back for rehearsals, and that provides plenty of time for conversation.

“It’s taken you a long time to talk to me,” she offered. “I think we’re closer than we’ve ever been. It’s been a really amazing two months. Because we’ve been commuting for most rehearsals, we’ve really realized our mutual passion for all things 80s and classic rock.”

There’s another interest they share, and since spending more time with Keleher as a peer instead of mentee, Kopf sees potential to explore it together.

“Patrick has already asked me, ‘Do you want an assistant director?’ He’s always talked about wanting to go into directing, and I would love to do that,” she said.

First, of course, they need to see their current project through. After all, that’s the fun part.

“It’s been really remarkable, getting to do this,” Kopf said before turning to Keleher. “Over the last couple of years, there has been a distance because we’ve kind of watched you move on to other things, and we don’t get to work with you as much. So getting to do this has been a real treat.”