Partners on the dance floor, in the classroom and in life 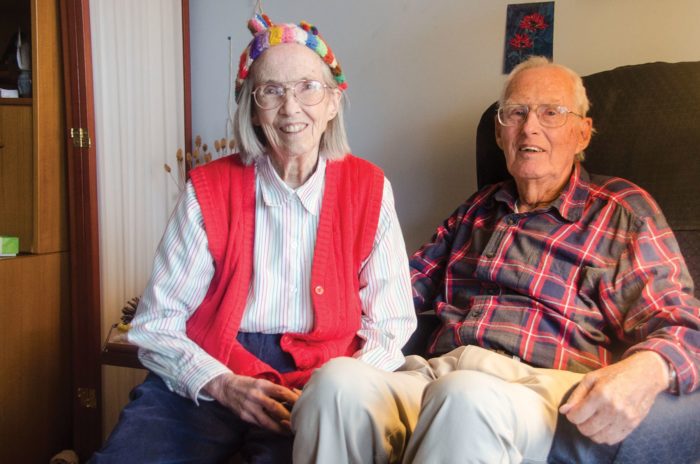 The Clarks have education in their blood, and seem to have been always drawn back to teaching despite their many other interests.

Rosemary grew up in Ohio, the daughter of a teacher and a principal. She majored in geology at Westchester College and immediately went to work for the United States Geological Survey’s uranium department — first in Washington D.C., then in Denver.

It gave her a chance to explore Western Colorado and Eastern Utah, but it turned out field work wasn’t what the head honchos had in mind for her.

“Being a woman, I got stuck in the offices,” she said. “They wanted me to write letters. I didn’t like it.”

So she went back to school and got a teaching certificate, returning to a passion for youth she’d discovered babysitting in sixth grade. She got a job teaching elementary school, which had the added bonus of leaving the summers free for excursions with the Colorado Mountain Club.

Dave’s mother was an English teacher and his father taught Latin at a private school in New York City, until they lost their apartment due to veteran rental preference and moved in with his grandparents in Massachusetts.

He ended up in the army himself, with a choice of theatre due to being top of the class. So, instead of Korea, he found himself near the Czech border, keeping an eye on the Soviets in the aftermath of World War II.

“I got sent to Europe and played basketball for three months,” he chuckled.

Upon his return, he developed an interest in early computers and got a job first in Cincinnati for General Electric and later in Denver for a consulting firm.

The two finally met folk dancing — something both of them had passion and practice in.

They lived fairly close to each other, and after plenty of dancing and visiting back and forth, they decided to get married. The actual ceremony took place back in Ohio, followed by a honeymoon road-trip that happened to include the 1959 Yellowstone earthquake — though only one of them even felt it. The only thing they had to return to was a small cabin near Foxton.

In August, they stopped into the state education office in hopes of getting jobs. The woman they spoke with was dubious of Dave’s credentials.

“She basically started telling me I needed to go back to school, but in the middle of this she got a phone call,” he said. “They had hired someone in Dolores who hadn’t showed up, and they were desperate.”

They consulted a map and decided to go for it. That’s where their son, Tom, was born. The only job Rosemary could find the first year was teaching middle school history, but she later settled into a second grade position and began to branch out into Girl Scout leading. Dave, meanwhile, worked on his certification during the summers and then decided to pursue first a Master’s in Math and then a Doctorate in Botany.

That took the family to Oregon, Montana and, briefly, the Grand Canyon, where Dave worked as a park ranger and toddler Tom impressed everyone by hiking to the bottom and back. Dolores wasn’t to be their final landing place.

“There weren’t that many jobs around, and we didn’t want to go back East,” Dave explained.

So he jumped at a part-time position at Colorado Mountain College, and the pair moved to the Valley on New Year’s Day 1972. Since then, Dave has taught at least 70 different courses at CMC, sometimes with Rosemary as a lab assistant. The couple were some of the first instructors to work extended field trips into their curriculum, and Tom grew up joining their trips to Dinosaur and beyond.

Rosemary, meanwhile, began volunteering at Carbondale Elementary School (just a few blocks from their Carbondale home), first helping the librarian who covered all grade levels and later offering math enrichment. “What do you want to learn in math?” was her mantra, backed by origami, tessellations, games and other resources that slipped the subject in under the radar.

She also kept busy with scout leading, cross stitching and sudoku. The couple joined groups for folk dancing and handbell playing and were instrumental in starting the kids’ soccer program that produced many of the Rams’ top players.

“That was fun to watch,” Rosemary said of the boys’ recent league dominance and success to the semifinals.

These days, they’re “doing less and less” but “that’s what happens as you get older.” Still, they’re familiar faces about town, where they’re liable to be greeted by one of the many students they’ve touched over the years.