Cat and owner live happily ever after 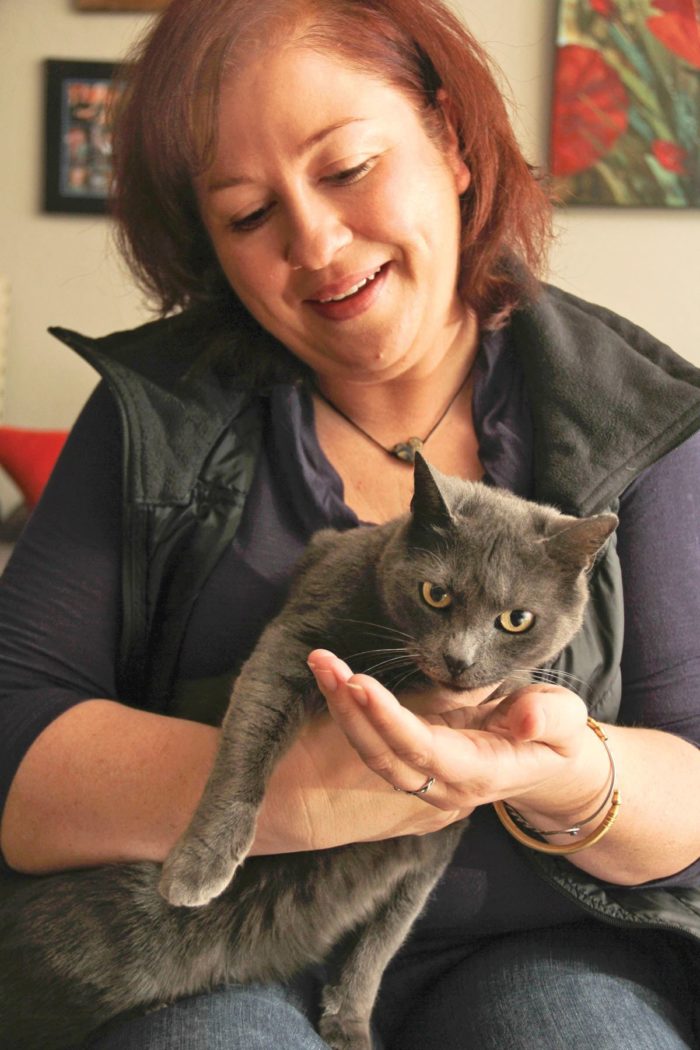 Once upon a time, (4½ years ago, to be exact) Kristin Levey and her son Drake lived in Carbondale, Colorado with her then significant other, Mark.

Drake was about to turn 15 years old and for his  birthday, Kristin decided that she wanted to get him a cat so they went to Colorado Animal Rescue to check out the feline population.

“We looked around for awhile and were standing in the hall with our backs to one of those glass enclosures, when I turned around and a kitten had stuck her paw out on the window and looked at us. Drake and I both felt a really strong soul connection and ended up adopting her,” Kristin said.

The kitten’s name was Bluebell, and they took her home to Carbondale hoping she would bond with their dog, Cricket. The critters did bond and Bluebell and Cricket became four-legged friends. However, forming friendships with people wasn’t as easy for Bluebell who was quite shy.

“Bluebell was an indoor cat and we lived in a house which was very social, with people coming and going a lot.  Bluebell would hide and not come out for Mark or anyone else. She would only come out of hiding for Drake and I and only sit in our laps.”

Bluebell was a picky kitty, not a bad kitty. She simply preferred to be with the two people who adopted her. During that period of time, Kristin also adopted Cookie, a 6-week old puppy she found  at a Navajo reservation in Arizona. When she brought her home, Bluebell and Cookie became fast friends.

Life can be complicated, and after Bluebell had been with them for about a year and a half, Mark and Kristin parted households. The Leveys had found a temporary living situation while they were waiting to move into their new home in Glenwood Springs, so Mark agreed to keep Bluebell in the interim. But one day, Mark hesitantly informed Kristin that she had gotten out of the house and was gone.

“We were so sad and waited for about two years before we adopted another cat who we named Bee,” Kristin said. “We call her ‘Queen Bee’ cause she’s the boss of everything, including our two dogs.”

Kristin, Drake, Cookie, Cricket and Bee have since been living in their home in Glenwood Springs. Kristin still works in Carbondale and has a nice friendship with Mark. Life had settled down… at least until three weeks ago, when the call came in.

“I saw that it was from C.A.R.E. I answered it, and they said that they had our cat,” Kristin said. “I thought to myself this is really weird because Bee doesn’t go outside. That’s when the woman at C.A.R.E said they found Bluebell. I explained to them it had been two and a half years since she disappeared and I had let the chip subscription expire. They still insisted that this was the information that came up when they scanned her… When I picked her up she was so affectionate and purring the whole time.”

According to the person she spoke with, a woman had found Bluebell under her deck in Ironbridge and she was able to catch her and took her to C.A.R.E.  “Bluebell was in great shape so obviously someone has been caring for her or else she’s been cared for by more than one person,” Levy said. “It’s a great mystery about what she’s been doing for two and a half years, but the woman in Ironbridge and whoever cared for her all have my sincere gratitude and we are more than willing for all of them to have visitation rights if they want to come forward. We would love to know whoever it is, or whoever they are ‘cuz that’s the coolest thing about this story.”

Bluebell and Queen Bee are currently getting to know one another but we hope that they will become friends and everyone will live happily ever after. (The end.)