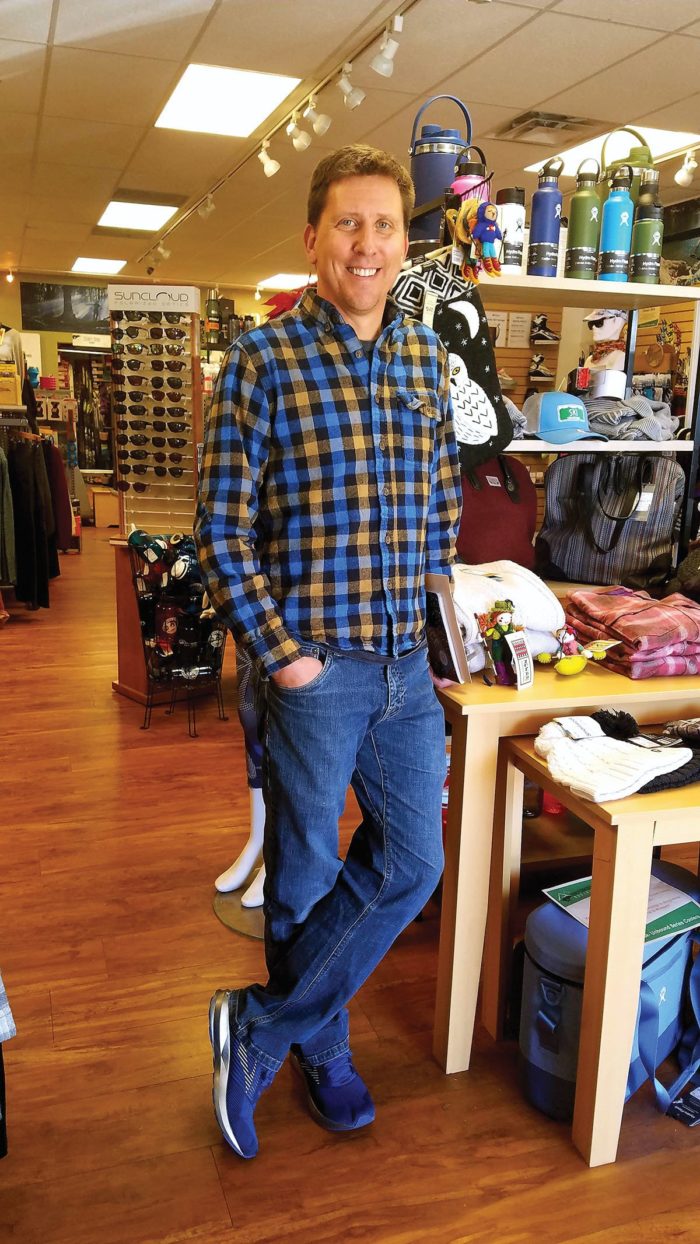 Independence Run & Hike has found itself with some big shoes to fill: since Sports Authority in Glenwood Springs closed its doors in 2016, the locally owned outdoor retailer has seen a bump in sales — and that’s led to a new kind of customer, too.

The shop, at 586 Highway 133, has an eclectic inventory ranging from women’s tunics to nordic skis to novelty headphones.

“I’m looking at a lot of different things, from stand-up paddleboards to sleeping bags and tents,” said owner Brion After. “I think our next move is to get a little bit more into the yoga, athleisure, tights, that type of thing.”

But it’s the store’s shoe collection — and, more importantly, the staff’s in-depth fittings — that inspires so much customer loyalty.

“It’s interesting, because as newer customers are coming in, maybe they were used to Sports Authority, so they’re used to walking in and just going, ‘That one.’ And we say, ‘Wait a minute, let us help you, because we want to get you in the right shoe so you’re happier and healthier for longer,’” he said. “We talk about insoles; we talk about injury prevention and stretches they can do. So that’s kind of what the whole store is based on.”

After has been in business in Carbondale for 12 years. He started the shop as a two-person operation in the Cowen Center, grinding seven-day workweeks as a new entrepreneur. Now, he has a full staff and enjoys next-door-neighbor status with Dos Gringos.

But even as his store fills some of the void left by a national chain’s closing, After faces an uphill battle because of his address — and it’s not the rent.

“My biggest problem is that a lot of the brands won’t sell to me because I’m in Carbondale,” he said, explaining that many brand representatives feel more confident selling to Aspen, Basalt or Glenwood. “A lot of the accounts and sales reps don’t realize that Carbondale’s become a town of its own.”

After’s reputation has earned him esteem among local physicians and physical therapists — so much so that a visit to his store is often included in their patient recommendations.

“We do a whole gait analysis: we video you, and we make sure we look at your foot a whole bunch of different ways,” he said. “Footwear’s actually a lot more important than people realize. I can’t tell you how many people come in and they’re like, ‘My doctor said I need new shoes.’ And we look at their shoes and we’re like, ‘Oh my gosh, you sure do.’”

It was After’s own experience with an injury and subsequent doctor’s recommendation that led him to what became the linchpin of his business; he had, at the time, run too many miles in his own shoes.

“I literally was injured, went to a doctor, he sort of mentioned this issue that I had, overpronation, and maybe I should try changing my shoes,” After said. “And all the sudden, things started to clear up. I went and trained with doctors and talked with physical therapists and had them video me, and I started to understand the whole thing.”

He now passes that knowledge to his staff and customers, personally training staff and ensuring everyone on both sides of a transaction understand his five-step fitting process.

When After talks about how shoe technology has evolved, he lights up. As far he is concerned, it’s the shoe that prevents injury and allows people — himself, included — to pursue their passions farther and longer.

Of course, After isn’t content to just see nice store displays — he prefers to invite the whole community for outdoor play. He sponsors a company race team and public races like the Jingle Bell Race, complete with an ugly sweater contest.