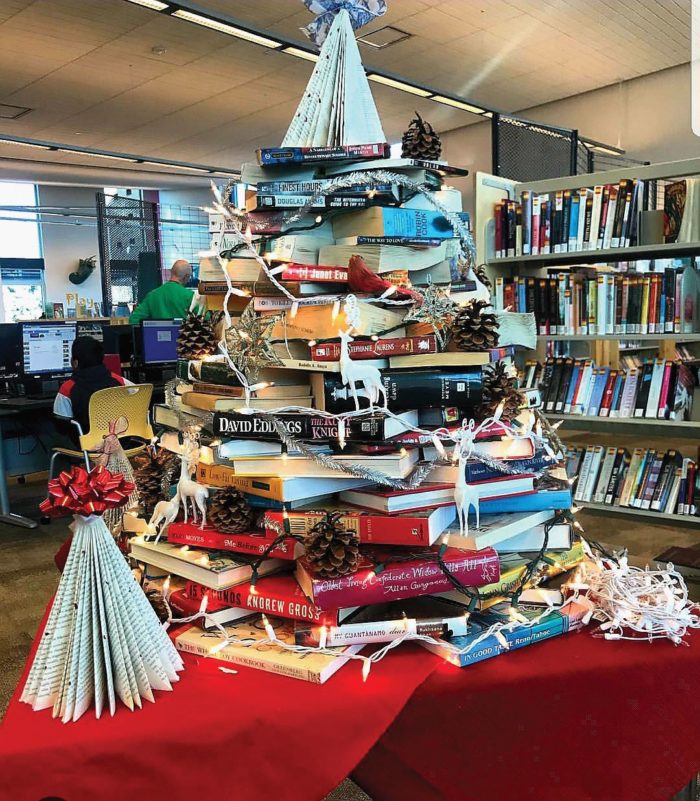 In fact, the librarian wishes she had more space to feature more authors.

“It’s just kind of amazing how many people in this area write,” she said. “I actually had about 15 authors approach me to be part of it, and I was just like, ‘I don’t have space.’”

The final roster includes nine people showcasing 19 publications between them. Book signings and sales will highlight the night, and nobody will go hungry, as Dunlavy’s planning appetizers and holiday treats, as well. While the event is new to Carbondale, the Lit Fest is a bit of a tradition for Dunlavy.

“I’ve done this at every other library I’ve worked at,” she said. “In Eagle and Avon, it’s gone really well. And in Carbondale, it’s even easier, because everyone here is already locally minded and so freaking creative.”

The timing is intentional, she continued, comparing it to the reoccuring Deck the Halls Artisanal Market at the Launchpad.

“I try to put it between Thanksgiving and Christmas, so it’s kind of gift-minded,” she explained. “Or you can just buy something for yourself. There’s all sorts of genres.” For instance, someone may come to find a fiction thriller for themselves, then end up also purchasing a coloring book for a grandchild or something for the local history buff in their life.

“It’s really interesting to see how these authors, they write so many different things. I can’t imagine that,” she continued.

Some of the reason for that — the sheer concentration of published authors across multiple genres in the area — is because of the network that exists here to support writers. Carbondale Writers’ Group, which meets monthly at the library, is one piece of that network. Linda Flynn has served as the major organizer the last six years, and she’s worked closely with Dunlavy for Lit Fest.

“If you have a meeting here, I’ll probably corner you and ask you to do an event with me, so that’s what I did with Linda,” Dunlavy laughed.

Flynn, for her part, has published three books and is actively working on a sequel to “Dream Glasses,” the only fiction she’s penned.

“That book was a lot of fun because I explored things that didn’t make any sense to me,” she said, adding that most of the book’s plot takes place in Paris. ”I’ve never been to Paris, so the Internet was a great resource. All of the locations in Paris are real, and many of the stories from there are real, but what happens in the bakery is not, and the people are not. When I got close to the end of the book, I didn’t really wanted to say goodbye to the characters.”

The real-life characters behind the books at Lit Fest are no strangers to one another — quite the opposite.

“The Carbondale Writers’ Group is an amazing group,” Flynn said with a smile. “We edit one another’s stuff. Even if I don’t have anything today, the group is always inspirational, motivational. It’s a good environment.”

It’s also a productive one.

“In this last 12-month period, five people from the group have had work published,” she said. “So that to me speaks volumes about what’s going on. It’s not all about what I’m getting out of the group; we’re there to help one another, and I really, really like that.”

Of course, there’s more to publishing a work than writing it, as many authors will bemoan. But unlike days of yore, when aspiring authors needed agents and the validation of a traditional publishing house, today, many self publish — which means doing all promotional legwork alone.

“People are able to come in and go, ‘Oh, this is perfect because I hate doing this,’” she said. “People can do they want to do: they write, and we publish.”

Most of the featured authors at Thursday’s event utilized Light of the Moon, Dunlavy noted. With Lit Fest, she hopes to create a platform for local authors that’s low stress and gets them in front of local readers.