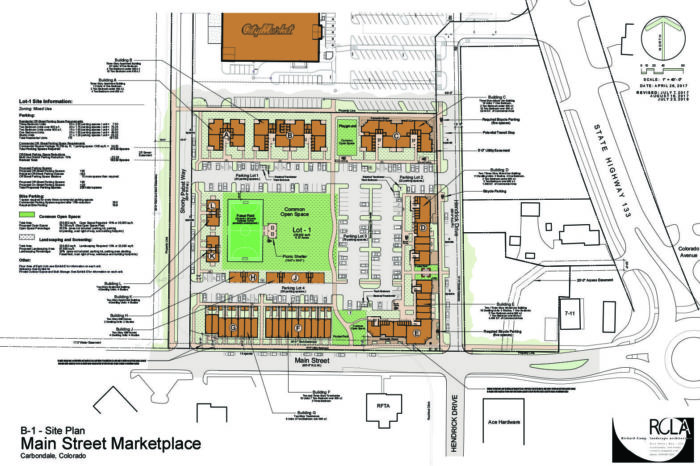 While planner Bob Schultz’s characterization of the Marketplace property as “a warzone” would likely be considered apt to those who campaigned on either side, the Town and developers appear to have reached an armistice.

With no one from the public seeking to comment, the Board of Trustees unanimously approved a major site plan review, conditional use permit and requests for alternative compliance and variance for lot 1 of the Carbondale Marketplace subdivision on Nov. 27.

A new City Market — long intended as the anchor institution of proposed developments on the former CRMS property northwest of the roundabout — has already been approved for lots 2-4, while First Bank is planning to make use of lot 5.

The 5.37 acre parcel in question is now slated for the Main Street Marketplace, a mixed-use development with around 10,000 square feet of commercial space and 115 rental residential units ranging from “studios on stilts” to three bedroom townhomes. It likely won’t be built all at once, but the 23 deed-restricted units are arranged to develop at the same rate as the rest of the complex, Schultz noted.

“There’s certainly variety in the mix,” he said. “We hope that means there will be something for anybody who’s looking for a rental.”

Overall, the proposal looked very similar to what was envisioned during the rezoning process this time last year and, according to Town Planner Janet Buck, was in compliance with the town’s Unified Development Code.

“One of the complaints was that Carbondale doesn’t know what it wants, so the Town spent a bunch of money and a bunch of time to create a comp plan and a UDC that’s very prescriptive,” Schultz said. “Once you embrace that, there’s a certain beauty to it.”

The developers were, however, asking for an exemption from the zoning’s front yard maximum setback due to a ditch easement along Main Street, as well as approval of ground-floor residential and an alternative private outdoor space for several tenants.

In addition to several pocket parks, a public path straight to City Market and a larger open space with a picnic shelter and futsal (5 on 5 soccer) court, most units boast balconies, but developers wanted something special for the “anchor” corner at Main Street and Hendrick Drive. They proposed a first floor awning to give it a “landmark” restaurant or cafe ambiance, with private space for the upstairs residents placed on the roof of adjacent units.

Trustee Ben Bohmfalk expressed some trepidation that the residents directly under the rooftop patio wouldn’t have access to it, but that didn’t prove to be a sticking point. Neither did the setback variance, given the reality of the ditch easement, first-floor “flex” spaces (which could be either commercial or residential depending on demand) or exemption from a tight construction timeline. The plan does meet green code requirements for commercial solar offset, and Trustee Erica Sparhawk urged them to at least plan for the possibility of electric vehicle charging.

In the end, though, it seemed that that top consideration was affordable housing, at least for Marty Silverstein.

“The key thing is the price point,” he said. Hopefully using these smaller units we’ll be able to keep it affordable and keep people in Carbondale.”