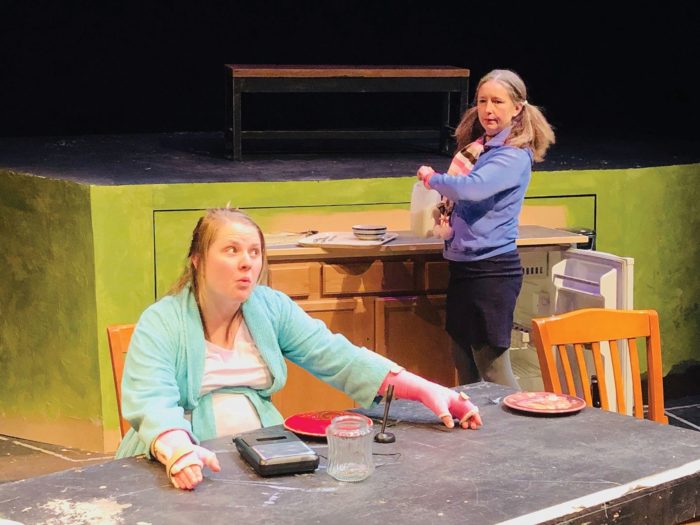 If you’re feeling off-kilter about holiday family visits, Thunder River Theatre Company’s production of Kimberly Akimbo might be the tonic you need. The old adage says that laughter is the best medicine, and TRTC is providing a healthy dose of just that.

Written in 2000 by Pulitzer-Prize-winning playwright David Lindsay-Abaire, the play is the coming-of-age story of Kimberly, an adolescent girl who is suffering from progeria, a disease that causes her body to age at more than four times the normal rate. The plot is slight, but no matter. The play is driven by a quartet of quirky characters delivering cringe-worthy dialog that demands balance, energy and superb comedic timing.

Director Sue Lavin delivers big time, pulling together a stunning ensemble performance. Poised between farce and drama, TRTC’s cast makes us believe enough in their characters to sympathize, but not enough to get mired in their troubles. When dad accuses awkward, geeky Jeff of being nice just so he can get to daughter Kimberly’s tits — and does this while sitting elbow-to-elbow in the car with both barely-acquainted teenagers — we squirm, then laugh, because, one way or another, we’ve all been there.

The playwright’s theme is carpe diem; as Kimberly is simultaneously looking forward to her first kiss and facing the end of her life expectancy, Lindsay-Abaire is reminding us that life is too short to defer living. Kimberly’s predicament is an extreme version of what we all face.

The play is set around the time of Kimberly’s 16th birthday, a date that coincides with her life expectancy. Ironically, Kimberly, adeptly played by TRTC veteran Trary LeMee, is the only member of her family adult enough to cope with looming mortality. As Kimberly explains to her geeky love interest Jeff — uproariously played by TRTC newcomer Jonathan Webster — “Kimberly years are like dog years.”

Everyone else in Kimberly’s decidedly dysfunctional family has retreated into some form of denial about this: Her father, Buddy (Nyle Kenning) indulges in a drinking habit that keeps him from doing what a dad should be doing: picking up his daughter from the skating rink, celebrating her birthday, delivering on his repeatedly-deferred promise to take her to a theme park. Her mother, Pattie (Lauren Kenning) has gotten pregnant with a replacement child and is convinced, without evidence, that she’s dying of cancer, so she can focus on her own mortality instead of Kimberly’s.

Kimberly’s aunt Debra, energetically and deftly played by Sonja Meyer, careens onto the scene lugging both family secrets and a street-sized U.S. mailbox. She’s on the lam, and the purloined mailbox is the beginning of yet another of Debra’s illegal schemes, one that in the end offers a ray of hope to Kimberly.

In discovering Jonathan Webster, a Glenwood Springs High sophomore, TRTC Executive Director Corey Simpson has pulled off a casting coup equal to finding Isaac Stackonis, the Colorado Mesa University graduate who played the lead in Equus. It’s difficult and risky to fill adolescent role with actors who are the role’s actual age, but at TRTC, lightning has struck twice. As Jeff, Webster turns in a performance worthy of a far-more experienced actor, shining brightly amid a constellation of star performances.

As proof of his skill, this review would cite what happens on the heels of Kimberly’s dad accusing a shocked Jeff of being nice merely to get at Kimberly’s tits. In the very next scene, Jeff turns around and does exactly that. Somewhat timidly, Jeff offers to fondle Kimberly… but, but only if she wants! Well, only in the way she wants. Well, he could just settle for a kiss. Webster’s delivery is at once vulnerable, awkward, normal and screamingly funny.

When dad warns his daughter to stay away from Jeff’s house and family — because who knows what kind of people that family might hold? — we can’t help but laugh. In comparison to the Akimbo household, both Jeff’s family and the dysfunctional tribes we all grew up in ourselves come out looking pretty good by comparison.

If you’re expecting the tribe for the holidays, a night with Kimberly Akimbo might be just the bracer you need.