Police Academy offers a peek behind the thin blue line 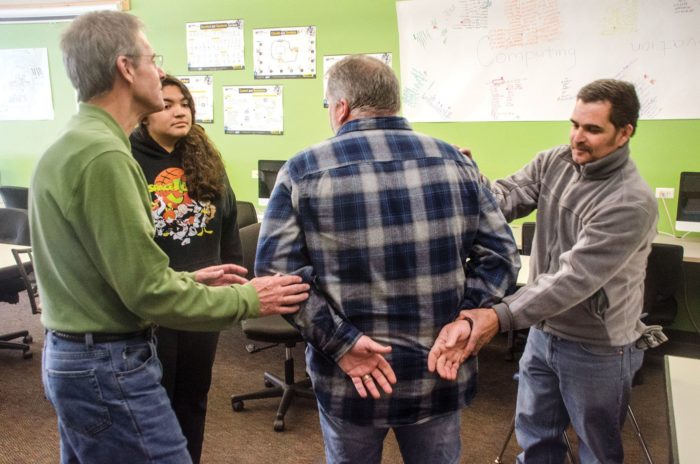 A domestic violence report, a welfare check and a traffic stop are all in a day’s work for a police officer — but not for the participants of Basalt’s Community Police Academy.

Dec. 1 was “scenario day” for the fourth annual event at Basalt High School — a synthesis of the skills and information they’ve been working on for weeks. While some of the students are looking at careers in law enforcement, the majority are just interested in learning more about what their peace officers are up to — with Spanish interpreters available.

“It’s an opportunity for the police to show community members what we do and also take off the uniforms and build relationships,” explained Basalt Police Chief Greg Knott. “There are just so many skills law enforcement officers have to have. It comes through training and on the job. This is basically a crash course of our field training program.”

For scenario day, officers and others roleplayed to bring common situations to life.

School Resource Officer Thomas Wright portrayed the aggressor in a domestic violence opposite his real-life wife. As each group approached the door, they heard the sounds of shouting and scuffling from within. After a (sometimes too long) pause to plan, they were greeted with a smile.

“I’m the controller, and if you let me, I’ll control you, too,” Wright told them later.

He expertly positioned himself so he could see his wife but the officers can’t see their partner, tried to build camaraderie and draw attention away from the furniture strewn around the floor. It doesn’t work.

“They may not have full knowledge of the law, but they have a good grasp of right and wrong,” he noted. “I’m trying to show them a problem they need to fix, but their job is to gather facts about what law violations may have occurred, not to pass judgement.”

Next door, Sergeant Aaron Munch was taking participants through some more confrontational scenarios with the aid of a projector and dummy weapons.

“Action is quicker than reaction,” he noted as he controlled the simulation in a sort of choose-your-own-adventure roleplay. It was all too easy to freeze after the active shooter took down your partner, hit a bystander or plug the belligerent trespasser who had a stapler, not a gun. Even those who made the “right” decisions were left turning to their neighbors to justify a shot taken — or not. It’s an argument for body-cams, Munch noted, as in real life there’s rarely an impartial audience or instant replay.

“It hits home that it’s a serious and dangerous job,” she said. “You have to be above yourself and be willing to put your life on the line.”

“Sometimes, we have images of police as just out to ticket us,” he said. “This provides a sense of sympathy on what they go through on a daily basis.”

And each year is a little different, which is why Felipe Mercado can still learn something new after taking the class three times in an effort to “be a better person, citizen, father, neighbor…”

“You want to help but you don’t know how,” he explained. “They have to be ready for any situation.”

The sentiment was echoed by Officer Ernie Mack.

“Every call is going to be different,” he said. “You just hope you can take a little piece to the next call and make it better.”