Putting a face to the brand with pop-ups at Batch 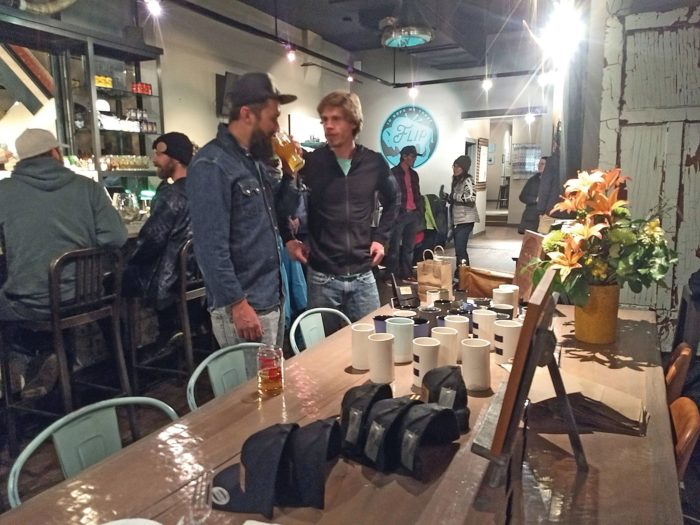 Since moving to Main Street just over a year ago, Roaring Fork Beer Company’s “Batch” tasting room has continued to change and grow with the new location.

“I do sometimes miss the small, Cheer’s-like atmosphere at the old place, but I love this space,” noted proprietor Aly Sanguily. “It’s unique and I want it to be more than just ours.”

To that end, Batch is hosting a series of pop-ups featuring local craftspeople. It’s not a new idea — RFBC used to offer their old space to nonprofits, but it’s expanded with events planned into spring and ramping up for the holidays.

“I wanted to open it up for all artists of all media — though mostly for people who don’t have a retail space of their own,” Sanguily said.“I just kind of give them the space and they can do what they want with it.”

First up was Why Cycles — “six friends trying to make the most modern and best riding titanium bikes in the world” — followed by woodburner K.A. Doyle, who did some on-site demos.

Dave Kodama of Kenichi Woodworking opted for a collaborative event with ceramicist Liz Heller. The pair first worked together for a Clay Center show last year and are planning to participate in a show at Colorado Mountain College’s Aspen campus in January.

“I’ve always admired her aesthetic,” Kodama said. “We’re each adding a whole new medium to our work. We just work so well together. Not only a partnership but a really good friendship came out of that and continues to grow.”

The event offered different advantages to each of them, with Heller offering a backlog of work for sale and Kodama meeting potential custom clients.

“For her it was a great sales opportunity and for me it was more of a marketing opportunity,” he explained. “It puts a face to the name behind the company, and it’s not necessarily the demographic that goes to art galleries, so it’s a different audience.”

The centerpiece of Kodama’s display was a recently completed custom credenza designed for a stereo and turntable. He actually borrowed it back from the buyer to spin records brought in by attendees specifically for the event.

“I wanted to display some furniture that I’d done, and that was the latest piece. It was a great chance to get it in front of a lot of people instead of just my clients,” he said. “People brought classics and obscure records and everyone had a lot of fun.”

The interactive and collaborative aspects are precisely what Sanguily is hoping to see.

“It’s great to see the artist in motion — the process. It makes it more personal,” she said. “We had all kinds of people coming for Liz and all kinds coming for Dave and it all came together.”

The latest feature, Grass Sticks, came all the way from Steamboat to show off custom ski poles. It also proved an opportunity for Batch to show off its new food menu, featuring bar snacks and paninis. While RFBC is known for an array of tasty special events (New Years Eve Brunch will be back this year), patrons have traditionally been encouraged to bring in food from elsewhere to accompany their brews. That policy is being phased out, and folks don’t seem to mind the change — particularly the pop-up crowd.

“It can be hard to get people out when the sun goes down at 4:30,” Sanguily noted. “But these events have been really well received.”

The next pop-up will feature woodblock and screen prints by Thimble Fox and  hand printed and sewn napkin sets and scarves, adorable and comfy locally made shirts for kids and adults by Wild Feather & Stone, from 6 to 8 p.m. Thursday, Dec. 13 at Batch (358 Main St.). After that, keep an eye out on RFBC’s Facebook and in The Sun’s calendar for more events.

“I have quite a waitlist, so there’s a need,” Sanguily said.