Should experience be required to run for sheriff? 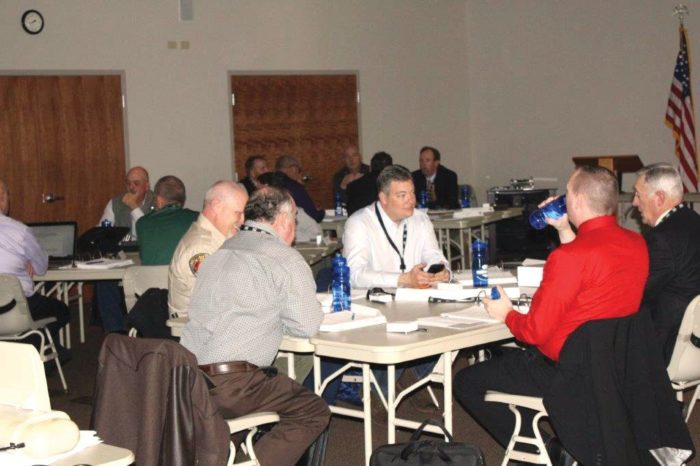 County Sheriffs of Colorado Director Chris Johnson’s work schedule is particularly busy these days: with votes fully tallied across the state, CSOC is responsible for training the newly elected sheriffs before their first day on the job.

“The vast majority of sheriffs-elect have never been a sheriff before,” he said. “There are a few sheriffs who were appointed and have been sheriffs for over a year, but they’re still required by law to attend this new sheriffs’ institute.”

Despite the different experience levels present, there was one shared credential among them, Johnson noted. “All of the folks we have now have some law enforcement experience,” he clarified. Whether that experience is acting as a state patroller or police chief, nobody elected as sheriff in Colorado in November was a total rookie.

Lou Vallario, recently re-elected to his fifth term as Garfield County sheriff, did not need to attend the training, of course. He touted his experience as the cornerstone of his campaign and considered his victory against write-in challenger Paramroop Singh Khalsa as affirmation of that experience from voters.

“I’m not a term-limits guy; I just think that term limits are done in the voting booth,” Vallario said. In fact, he continued, experience in the role is advantageous for a sheriff. “A lot of what we do, certainly from the sheriff’s perspective, still revolves around laws that were originated in the 1880s, 1890s. Back then, there was no peace officer standards. This is 2018, and just because of the complexity and the liability of running a sheriff’s office, I think at a minimum, you should be at least a certified peace officer with experience.”

“To run for sheriff was a knee-jerk decision,” he acknowledged. As of now, the Mana Foods co-owner does not have any formal law enforcement experience — though considering Hunter S. Thompson’s famous 1970 Aspen campaign for sheriff specifically to shake the status quo, Khalsa’s certainly not the first Roaring Fork Valley sheriff candidate without a formal background. But he’s planning on updating his résumé before a future campaign.

“I’ve heard, ‘You don’t have any experience,’ but [Colorado Mountain College] has a wonderful program,” he said. “I’ve looked into participating in their program and run for election in four years.” He’s also considered pursuing a bachelor’s degree in criminal justice. “So that way, the next time it comes around, I’d have a complete understanding of the newest information available  But what I do understand is it’s a platform. [Sheriffs] make a difference in the community.”

On that, Vallario and his former opponent agree, even if they don’t see eye to eye on what that difference should be. Khalsa’s candidacy was at least partly inspired by his perceptions of police conduct when he was arrested Jan. 18 on what even Vallario later determined were not credible charges. (Though Khalsa was charged with a class two misdemeanor for allegedly obstructing a peace officer, which he denies.) He’s since criticized what he calls “enhancing fear” in the police culture and aspires to change that culture.

Vallario and Johnson both feel that though the sheriff’s position is an elected one, it’s in a different category than more vision-driven roles such as city council or county commissioner.

“There’s a pro and con to that,” Vallario reflected. “Being elected, I hate to say it, but obviously there are some politics involved with that. And I hate being political because what I do for a living has no bearing on whether you’re a Democrat or a Republican; it’s whether you violate the law or not.”

And knowing the detailed nuances of the law is critical, Johnson echoed. It’s the reason newly elected sheriffs go through CSOC’s institute. “Each one of them is going to [swear to] uphold the constitution of Colorado on Jan. 8,” he said. “Unless you know what’s going on, how can you swear allegiance to that to uphold it?”

That said, Vallario was clear in his opinion: electing the sheriff, while not a perfect system, is still better than appointing a person (police chiefs, for instance, are appointed roles).

“Certainly I’m not suggesting in our county this would happen, but there are probably counties where we’re going to appoint Uncle Bubba to be the sheriff, and then you have corruption,” he quipped.

Still, some advocates think that, like for the district attorney, there should be some experiential requirements to ensure quality candidates for sheriff. Currently, state law requires only that a candidate be a legal adult residing in the county in which he or she is running, has no felony convictions and passes a Colorado Bureau of Investigations background check.

“We have one county that’s working on a possible bill that maybe will come forward,” Johnson said, adding that it’s too soon in the process to divulge which county is working on the legislation proposal. He and Vallario, like those drafting that language, agree that a candidate should at minimum be a certified peace officer. “There may be a possible bill introduced asking for that requirement to the legislature.”

Robert Glassmire, too, comes from a law enforcement background. Many coroners do, he noted, which could be particularly useful in the rare event that a coroner takes on the duties of the sheriff, thanks to a law enacted in 1877. In his case, that work became essential in his current role as Garfield County coroner.

All of that said, like the sheriff’s office, there is no state statute requiring any specific professional credentials for a candidate for coroner.

“I suppose the requirement is passed on to the voters who decide what they want in a county coroner,” Glassmire said, if there are voters in the equation at all. Colorado elects coroners, except in the four home-rule counties, which include Pitkin. But across the country, it’s almost an even split between elected coroners and appointed medical examiners — sometimes an appointed medical examiner works to assist elected coroners with duties such as autopsies.

“I can certainly have arguments for and against both systems,” he said.