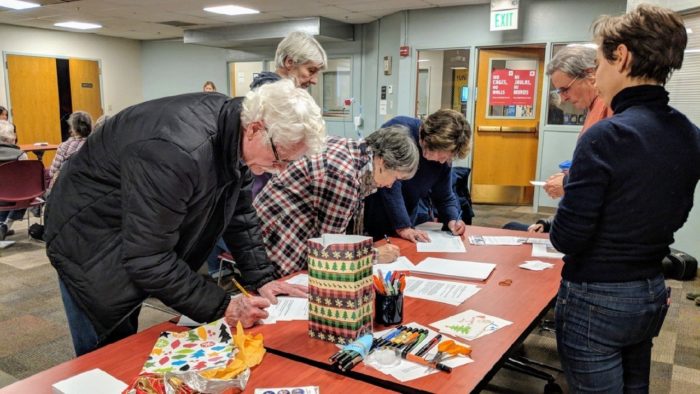 By the end of the event, newly licensed attorney Laura Horst was inspired. She doesn’t have any experience yet with immigration law, but that’s not stopping her from wanting to volunteer with Claire Noone on her next expedition to the southern border.

“I’d love to tag along,” she told Noone after Noone’s standing-room-only presentation about her recent experiences in Tornillo, Texas at the Third Street Center.

It was her second trek to an isolated immigration facility in the desert. Last summer, with money raised locally via her GoFundMe page, she visited the for-profit Dilley detention facility — officially titled the South Texas Family Residential Center. It’s the largest detention center in the country, with a capacity of 2,400.

“My job was to go meet with the children and their mothers in private — as much privacy as you can get in those situations — and get them to tell me their stories,” she said of the asylum seekers. “A lot of these women and children are in such trauma that they don’t tell their stories in a kind of arc of narrative, so it’s really important to help them craft [that].”

She and fellow attorneys help asylum seekers focus on the most relevant facts legally for the next step in the process, the credible fear interview (CFI).

Then there’s the language barrier.

“There are a lot of kids from Guatemala that speak indigenous languages, so we have to get a phone translator, and they translate into Spanish, and then I have to write it in English, so there is so much room for error,” Noone said. “I was sitting in on a CFI interview, and she said, ‘Yes, I was raped multiple times,’ and the translator reported, ‘Yes I was harassed multiple times.’ So how many of those happen without someone present to [intervene]?”

Noone was one of several speakers at Love Knows No Borders: Voices from the Border. Hosted by Sanctuary Unidos, the Two Rivers Unitarian Universalists (TRUU) parsonage, the lineup also featured Glenwood Springs immigration attorney Jennifer Smith.

“This is a self-created problem for media attention,” she said of the immigration processing backlog. “We have systems in place. We have extreme vetting — it already existed! People are not getting asylum willy-nilly. These cases are tough to win.”

And in some ways, they’re getting tougher, she continued.

“As part of the American Immigration Lawyers Association and chair of the Colorado chapter, we see every day the crazy things our government is doing that flies under the radar of the general population to affect people’s ability to seek justice in the United States,” she said. “This isn’t a brand new thing — it’s not just this administration. It’s an ongoing effort by our government to continue to build what we call the invisible wall.”

TRUU Reverend Shawna Foster knows too well some of the tactics officials use to bolster that invisible wall. She recently went to San Diego, Calif. and Tijuana. When she talks about it, she gets fired up.

“Politically, what the Trump administration wanted was a spectacle of thousands of people trying to get across the border, but the caravan wasn’t getting there fast enough, so they put down the number of asylum processors at the Tijuana-San Diego port of entry so that thousands would swell up,” she said.

In San Diego, Foster was answering a call to action put out to faith leaders by the American Friends Service Committee to witness the increased militarization of the border on Dec. 15 at La Posada at Friendship Park. Established by then-First Lady Pat Nixon who famously said, “May there never be a wall between these two great nations, only friendship,” the binational park provides an opportunity for families to see each other across the border. La Posada is a Christmas tradition, re-enacting the Bible story of Mary and Joseph seeking shelter.

The event organizers put out their own call to action that night. Donation jars for organizations that fund attorneys at the border were well labeled. Tables were set up and ready for signatures, letters to Colorado Congresspeople and holiday cards to detainees at the Aurora ICE Processing Center, a for-profit facility in Colorado that now houses 1,532 people (up from about 150 in 1986).

“The stories mixed with an inability to take action, that’s the weight on a lot of our hearts,” Noone said. “I can better hear the stories, better process, by action.”