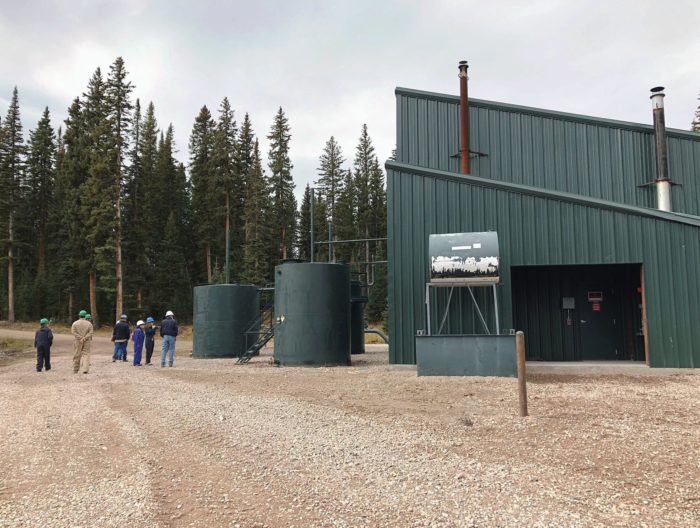 A pair of new natural gas storage wells are going in at the Wolf Creek Storage Unit in the Thompson Creek area. Rocky Mountain Natural Gas (RMNG), a subsidiary of Black Hills Energy (BHE), submitted a proposal to the Bureau of Land Management in March, 2018 for the maintenance project. Scott Fitzwilliams, White River National Forest supervisor, told The Sopris Sun that Black Hills Energy has two existing pads and wells that they need to re-do. “They need to re-drill these wells for storage,” he said.

The storage field is on Forest Service Road 300 in Pitkin County. Local roads are maintained by Pitkin County, which invited Garfield County to submit comments for the permitting process. At a recent meeting, Garfield County Commissioners cited concerns about haul routes. RMNG indicates that large drilling equipment would travel in and out of the area using Highway 82, Highway 133, Dry Park Road, Four Mile Road and 300 Road. Completion equipment would use I-70 Exit 114, Midland Avenue in Glenwood Springs, Four Mile Road and 300 Road.

It is unclear whether hydraulic fracturing or “fracking” will be necessary. Black Hills Energy Manager for Community Affairs, Carly West, said in an email to The Sun that they do not plan to frack the wells. “RMNG does not anticipate that hydraulic fracturing will be required. The wells that are being replaced are injection and withdraw wells, through which odorized, pipeline-quality natural gas is injected into the storage field during off-peak times and withdrawn during the peak season…” She added in a phone interview that fracking is something the company initially looked at. “But, it’s not something we’re currently planning on.”

But, David Boyd, Public Information Officer for the BLM’s Colorado River Valley Field Office, said that fracking is used for this kind of well. “There’s no difference between drilling a well to get gas out of the ground and drilling a well to put gas into the ground,” he explained. “They still need to drill down to the formation. They need to frack it to create space for the gas.” Boyd said.

West said that if any gas is released during drilling operations, it would likely be flared off. “However, as we are utilizing an existing storage field and do not anticipate using hydraulic fracturing, we would not anticipate a significant release of natural gas in the process.”

The Wolf Creek Storage Unit is not part of the US Forest Service decision against drilling new wells in the Thompson Divide, Fitzwilliams noted.

“We were very specific and very clear in the [Environmental Impact Statement] that this is about future leasing,” he explained. “[The Wolf Creek Storage Unit] is an existing lease that they’ve had for a long, long time… Wells need maintenance. Wells need to be replaced so this is well within what we anticipated and well within the decisions made in the past.”

Carbondale’s Wilderness Workshop, a public lands advocacy group, is not opposed to existing infrastructure in the Thompson Divide. But, Peter Hart, staff attorney, said that the group will follow the project closely.

“They are going to take a drilling rig up there and the area has some pretty sensitive resources,” he said. “The pads that they propose to drill on are in sensitive watersheds that have Colorado River cutthroat trout and there’s going to be some truck traffic.”

The BLM is reviewing the draft application to drill. Once the draft is approved, the proposal will be open for public comment.  RMNG intends to begin work on the wells this summer.