Getting hooked on radio 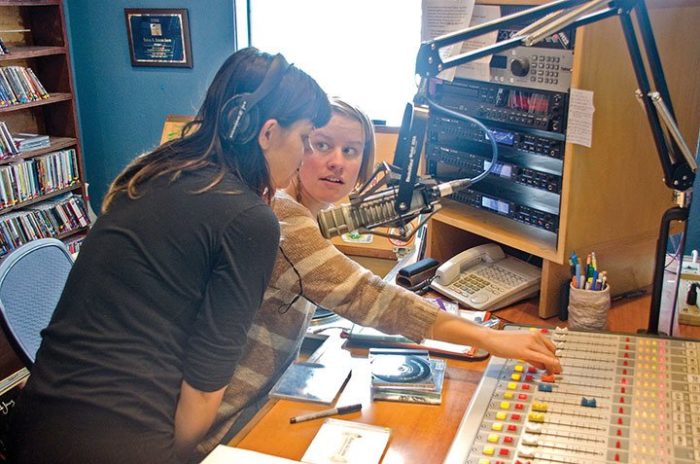 Radio takes time management to a whole new level. Seconds matter. So when you’re moonlighting as a DJ on KDNK for the first time, getting that next song lined up can feel, well, hectic.

But fortunately for me, I was in good company, spending my Christmas Eve afternoon with Will Grandbois and Josie Castaldo for the noon DJ slot. While I’ve gotten more comfortable with “the board” — an intimidating array of buttons and sliders with not one but two accompanying computer screens — during my tenure hosting Express Yourself and All Things Considered on Fridays, DJing was a totally different animal.

The walls in the station are lined with rows and rows of CDs. You can spend hours just perusing the library, except you only have two minutes before that song you’re playing is done and you need to find something fast.

That kind of pressure can also be really freeing. Instead of obsessing over finding exactly the perfect song that would transition from the current vibe, you sometimes gamble and just pick the first thing you see that sort of fits the theme (female vocalist, done!). It’s a great way to discover new music and artists.

Of course, because we were co-conducting the airwaves, I was relieved from most of that pressure. Will spent much of the time curating a selection of CDs and vinyl records for us, leaving Josie and me to decide the final production. We learned how to cue the vinyl — which meant manually spinning it and listening for when a desired song actually starts — and balancing that with the cued CDs and loaded iTunes playlists.

There were hiccups, of course, like the time Josie’s phone was cued with the perfect song, and I turned up the phone line instead of the iPod slider on the board. If you heard a blaring beeping in the middle of that set, yeah… that was my bad. But hey, as Will aptly pointed out, you can always buy time by talking on the mic — which later led to Josie’s on-air debut!

No matter what chaos ensued, we always, always laughed about it. And that’s the beauty of trying something new, I’ve found: it’s infinitely easier if you can learn to laugh at your inevitable mistakes. It’s really an exercise in detachment.

That said, sometimes trying something new can lead to a new, wonderful attachment, too.

“I think you all have opened a huge can of worms here,” Josie said with a grin after our set. I’m looking forward to seeing her more regularly at the station, because she’s surely going to become a staple presence.

Will was the real mastermind behind our DJing stint, but I think even he got to wear a new hat that day — I’m not sure that he’s ever mentored two people at once, but he proved to be an adept teacher. This is the second year in a row we at The Sun have dedicated a bit of the first paper of the year to sharing our experiences of a new personal undertaking. I think at this point, it’s a tradition. There’s only one rule, and it’s a simple one: you can choose whatever interests you, but it needs to be new to you, and it needs to be something accessible to everyone who feels inspired to try it, as well.