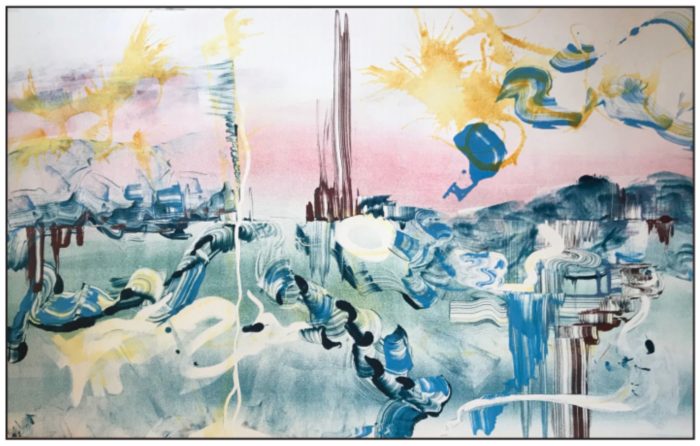 Carbondale is a well celebrated Colorado Creative District — and while that certainly makes the town special, it’s not unique in its classification.

There are 20 officially certified creative districts throughout the state, and while a collaboration has long been discussed, they’ve mostly acted as artistic silos.

That’s about to change, as of Friday, Jan. 11. Carbondale Arts Executive Director Amy Kimberly has been working feverishly in recent weeks to make sure of it, facilitating “Impressions on Ink: Colorado Creative District Printmakers.”

“CMC (Colorado Mountain College) had approached us about putting together a series of shows that feature creative district artists with the idea that they would show at other CMC galleries as well,” Kimberly said. “It’s something as a group, creative districts, we’ve been talking about for several years: how can we start sharing our artists and getting other exposure? So when CMC brought it up, I thought here’s the perfect venue to do that and see how it goes.”

The exhibit, which will run at the ArtShare Gallery at the Morgridge Commons in Glenwood Springs until Feb. 4, features eight printmakers whose residences include Carbondale, Paonia, Steamboat Springs and Crested Butte. Each artist contributed two pieces to the show. Ali O’Neal, founder of Thimble Fox and resident artist at Studio for Arts + Works (SAW), is one such artist. She’s particularly looking forward to the opening reception Friday from 6-8 p.m.

“It’s a really great way not only to see the show but also to be able to talk to the artists about their process and the work that they’re showing,” she said during an interview on KDNK’s Express Yourself. “I think I’m really kind of an extroverted introvert. If it’s something I’m talking about that I really love and feel passionate about, then I really feel no introversion at all. Those events are really great, and I personally love going to openings. It’s really special to see a piece, really relate to it, then be able to talk to the artist about their process and their background, too.”

As for her own process and background, O’Neal got her start in screen printing at Anderson Ranch.

“They offer a really wonderful scholarship program and especially favor local teachers, which I used to be, and I took a screen printing class there,” she said. “Honestly, describing it is probably more complicated than doing it. You digitalize the sketch, print out a transparency and basically with a special UV light, you burn your drawing into a part of the screen. It’s a really beautiful process.”

While all of the works featured in “Impressions on Ink” are paper based, O’Neal also does a lot with block and silk screen printing. Regardless of the medium, though, she always hopes to inspire conversation through her art.

“I like to have a really clean style with kind of a deeper messaging behind it. For my pieces in the show, one of them is a political commentary on our current president and the other is social commentary on what it’s like to be dating in this Valley,” she said.

Not that her work will be limited to a Roaring Fork Valley audience. One of the benefits of collaborating with CMC to host the exhibit is that it will rotate through several campuses, Kimberly pointed out.

“Right now, Eagle CMC Gallery and Steamboat Springs Gallery are both planning on having this particular show,” she said. “We love that we’re going to be able to expose our artists from our creative district to Steamboat and Edwards.”

It’s also only the first in a line of planned exhibits of such a collaborative nature.

“It’s sort of all getting off the ground with this one,” Kimberly said. “The next show will be a watercolor show, and that’s this summer — or spring.”