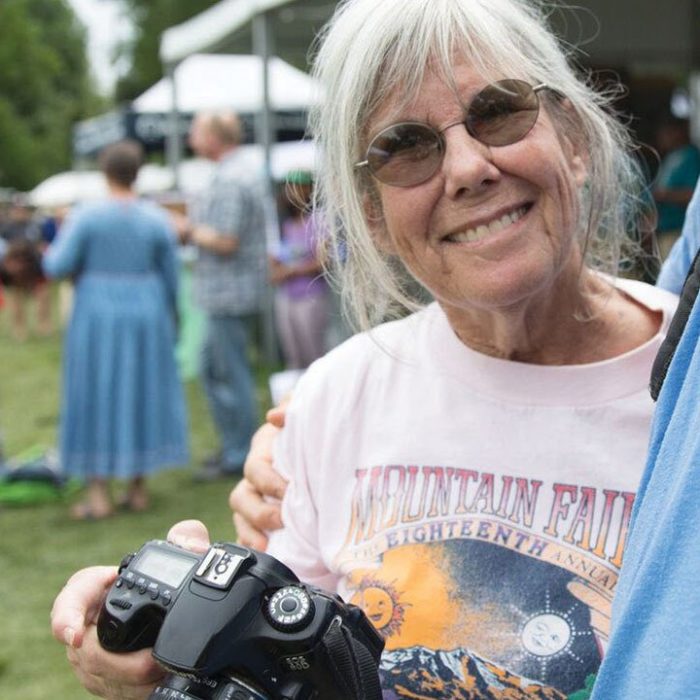 For Jane Bachrach, the only thing more fundamental than photography is her love of animals.

Born and raised in the San Fernando Valley of Southern California, she lost her mother when she was 8 years old but always found companionship in the animals at home and on her grandparents’ ranch.

“I learned to ride before I could walk,” she said. “Horses are extremely sensitive. I knew that they could feel what I was feeling.”

She also had an affinity for dogs, raised pet rats in her family’s garage and played with the neighbors tortoises.

Her father, Stanley Gortikov, was president of Capitol Records, which also hooked her — as well as her brothers Jim and Scott — early on to music in general and the Beatles in particular.

“He would bring home singles and play them for me before they were released,” she recalled. “When he brought home ‘I Want to Hold Your Hand’ I asked him to play it again and again and each time I listened to it I liked it more and more.”

She shook John, Paul, George and Ringo’s hands at their first press conference stateside and saw them live at the Hollywood Bowl.

The camera caught Jane’s attention in Junior High, when she took a photo class and became one of three staff photographers for the school newspaper. Her dad built her a darkroom and for a while she developed her own pictures. She also dabbled in writing, with a particular affinity for funny stories and poems.

By high school, however, showing and jumping horses became more of a priority. “I also liked to go fast and wanted to be a jockey more than anything, but there were no girls doing it then,” she said.

So when it came time to go off to college, she opted for Elementary Education as a major. She met Don Bachrach there, and permanently ditched her maiden name when they got married and moved to his hometown of Chicago.

Don was studying law, and in an effort to help out, Jane went to work at the legal department for Playboy Enterprises. They later returned to Los Angeles, and although the marriage didn’t last the job did and provided a transition to Playboy’s new record company. That artist relations gig, in turn, set a course for years in the entertainment business.

Once, a secretary job for an agent expanded into finding new talent, particularly comedians for him and then other production companies.

“They would send me out at night to the comedy clubs to look for new talent,” she explained.

She later worked for an independent production company that produced shows for Showtime, such as “The Big Laff Off” — which involved scouting comedy talent as well.

“I saw most of them before they were big,” she said of the era’s comics.

She also showed foresight in television trends, pitching ideas similar to America’s Funniest Home Videos and Animal Planet without any bites. Meanwhile, the production environment resurrected her love of photography and she also got hooked on arena polo.

The latter proved problematic when she fell off a pony and — despite her helmet — suffered a bad concussion.

That made work tricky for a few years, and while she ended up doing post-production at “Baywatch” it became increasingly obvious that L.A. was no longer the place for her.

“When you have a head injury, all the traffic and activity – I couldn’t handle it anymore,” she explained.

So she took a tour of Colorado, where she had several friends, and fell in love with the Roaring Fork Valley. The fact that she got to help the Fenders birth a calf on her first visit probably didn’t hurt.

“The small town and all the surrounding agricultural area — I was in heaven,” she said.

So, in 1997, she sold her house, quit her job and moved with her horses. After a little searching, she found a place in Missouri Heights and worked selling tickets for Aspen SkiCo.

She now owns four goats: Daisy Rose, Lily of the Valley, Poppy and Tulip. A handful of head injuries sometimes precluded riding, but she found time to be with her horses almost every day.

When an office manager position opened up at the Valley Journal, she once again found herself expanding beyond her initial role, and was soon serving as staff photographer and occasional feature writer. Unsurprisingly, she particularly enjoyed shooting pictures of animals, and she pioneered a section called “Animals Ink.”

“That started off slow but became so popular that other papers picked it up,” she explained.

When the Journal shut down in 2008, she briefly went to work for the Crystal Valley Echo before landing at The Sopris Sun.

“I can’t see something that grabs me and not take a picture of it,” she said.

Nearly a decade later, she is moving on in hopes of finding creative freedom. Exactly what happens next remains to be seen, although she has a few ideas. You’ll still be able to catch her on the KDNK’s “Bronco Babble” during football season, and look for her children’s book “The Witty Kitty,” coming out this spring.