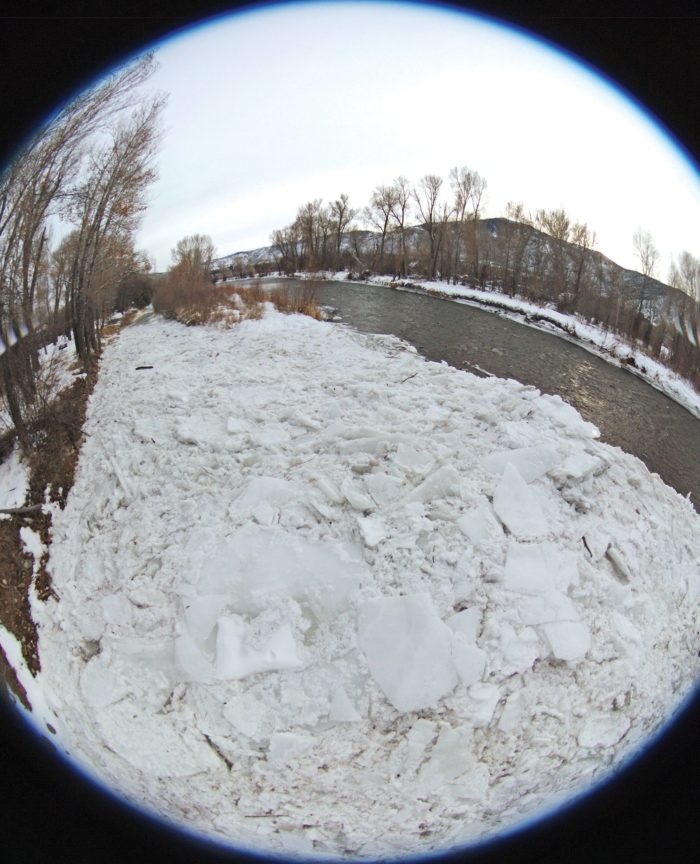 After an alert was issued by the Roaring Fork Conservancy (RFC) Friday afternoon, Basalt residents gathered near the banks and along bridges overlooking the Roaring Fork River to safely witness a rare natural phenomenon: an ice dam break.

Massive chunks of ice — some estimated at 12 to 18 inches thick and the size of a car’s hood — along with wooded debris including whole trees, rushed down the river. The river’s CFS (cubic feet per second) measurement more than doubled in some locations as the torrent charged through the channel.

Ice dams form in the extremely cold, single-digit or negative-temperature days that usually occur in late December or early January. The water is locked down as ice, causing the river’s flow to slow to a trickle.

“The river gets iced up, it starts to loosen up and then some sort of a dam or blockage forms and obviously the water backs up behind that,” RFC’s Executive Director Rick Lofaro explained. Though he could not say the precise location of the ice dams, he guessed they formed around or slightly above Old Snowmass towards the canyon.

Lofaro awoke Friday morning with a feeling (as well as advice from his wife) that he should relay RFC’s prediction to local authorities that an ice flow was likely to occur over the weekend. As it turned out, within a couple of hours of the alert’s release, a first surge tore through the channel in town at 2:01 p.m. A video of the ice flow is available on the Conservancy’s Facebook page and has received over 100,000 views.

“We knew it was going to come,” he said. “It came a little sooner than we thought.”

A second, also powerful flow occurred later in the afternoon at 3:55 p.m. Christina Medved, RFC’s Director of Community Outreach, noted that while an ice dam breaking is a relatively common occurrence, witnessing multiple events in one day is special. She pointed out that the second flow also had large chunks of ice, suggesting that that dam may have broken in a different geographical location from the first.

While some insects and fish certainly perished in the ice flows, according to Lofaro, he believes these events ultimately benefit stream health due to their scouring quality.

“In some ways you can liken it to a fire. There are some very beneficial cleansing, rejuvenating things that come out of a forest fire but also some things that aren’t so good. Historically, there is not a detrimental fish or insect kill. I don’t think it’s a catastrophic event… It opens up the river again in a lot of places and helps connect the channel,” he said.

While ice flows can pose a danger to humans, especially unsuspecting winter anglers, the Basalt police department reported no incidents of harm among people or pets, perhaps due in part to RFC’s dutiful public warning.

“By the time the second one hit, the word was out, the buzz was out,” said Lofaro. “People knew it was coming and safely got to the river’s edge and bridges to witness it, and that’s what we want—to alert and educate the community at the same time.”