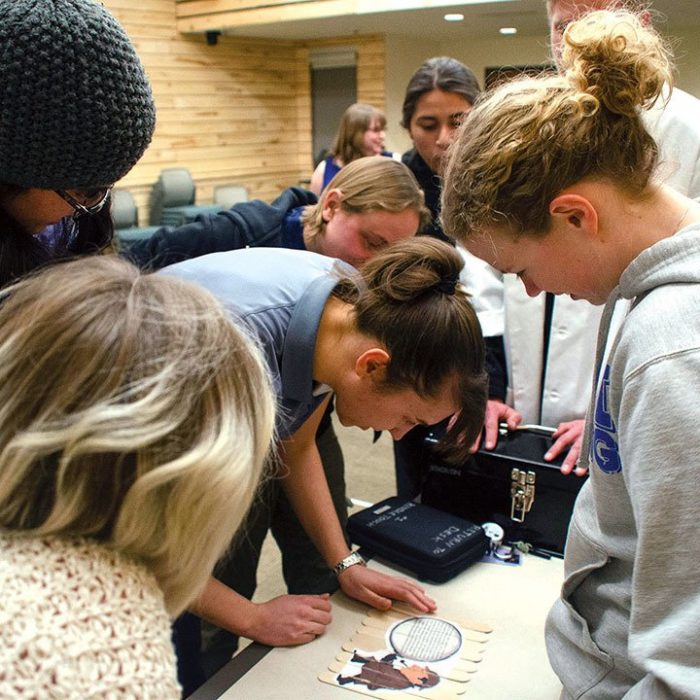 Apparently, the best way to get 20- and 30-somethings into the library is to “lock” them in a room and give them puzzles.

At least, that’s what the Basalt Regional Library is trying with a series of “escape room” events, among other programming. Escape rooms have recently come into vogue as a fun team-building and critical thinking exercise. There are numerous professional offerings, including from the Glenwood Adventure Company, but Circulation Coordinator Laura Baumgarten wanted to provide a free, accessible experience.

The initial event was Sherlock Holmes themed, with participants invited to prove their skills to become his next apprentice. The library staff completed the 30-minute challenge with 10 minutes to spare. This journalist was not so adept.

Drafted onto a team with a pair from English in Action and a woman who just happened to be walking by, I did my best to participate and record simultaneously. I managed to find a slip of paper with strange symbols in a hanging lab coat, but spent far too much time trying to decipher them before someone turned up the key. Despite going through every book on the shelf, I missed another message entirely. It had been a long time since any of us had used a locker-style combination lock — of which there were several — much less a “directional” lock or an old safe. We did pretty well putting together popsicle sticks into puzzles and correctly inferred that the birthdates on a series of Holmsian ID cards were relevant, but weren’t the best at maze solving. Each clue and lock builds on the next, so we needed plenty of help before finishing with seconds to spare.

The next group, an assortment of younger folks almost twice the recommended size, had no such trouble. Perhaps the immersal helped, as the whole large group made a point to stay within the taped space as if it were truly locked, and one even donned the lab coat — something I wish I’d thought of myself. They picked apart the room, broke into smaller groups to ponder each piece and put it all back together with no hints and trounced the staff’s record. Baumgarten is already plotting how to better stump them next time.

That’s less than a month off, with “Pirate Pursuit” slated for the evening of Feb. 8 and monthly, themed escape rooms continuing into the summer. For more information or to sign up, email lbaumgarten@basaltlibrary.org.

Meanwhile, you can test your skills against the final riddle from the first game:

One snowy night, Sherlock Holmes was at home sitting by the fire when a snowball came crashing through his window. He looked outside just in time to see the three Crimson brothers — John, Mark and Paul — run around the corner. The next day, he received a note that read “? Crimson. He broke your window.” Which of the three brothers should Holmes question?