Growth crowds elk, deer in more ways than one 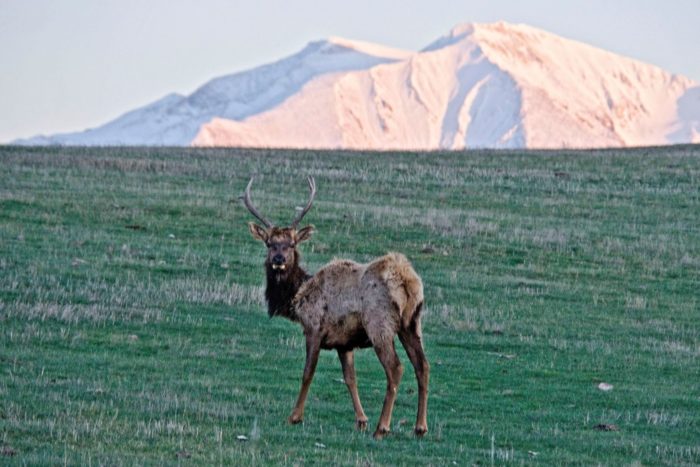 Before Aspen Glen was built, hundreds of elk used to graze between Carbondale and Glenwood — but the fact that the herd has since declined isn’t just a function of development.

“You’re seeing a direct loss of habitat and also extra people that are recreating on the lands that are left,” observed John Groves, Carbondale District Wildlife Manager. “We’re probably less than half the population we had 15 years ago.”

Before that, the Avalanche Creek Elk Data Analysis Unit E- 15, which covers Glenwood Springs to Castle Creek to the Raggeds, actually had the opposite problem.

“Back in the late 90s, we were probably above the carrying capacity, and up until the hard winter of ‘07, we were actively trying to get those numbers down,” Groves said. “Historically, you’d see a big rebound, but they’ve just been kind of stagnant.”

Deer have followed a similar trend, and while the moose population in the area is actually growing, there are still likely less than 100 individuals in the area. Regardless of species, midwinter is a rough time for large herbivores.

“They’re basically on a steady starvation diet all winter long,” Groves said. “But there’s almost no competition between moose, elk and deer. They each have their own niche.”

Some still come into Aspen Glen and neighboring subdivisions to chow down on fertilized grass and enjoy the shelter of the river bottom, but those that stay up high are actually healthier, according to Groves. And it’s not entirely bad for the groups to be fragmented rather than one big herd, he added, since they’re less likely to exhaust their resources.

More than the houses, Groves is worried about human interaction.

“People want to recreate and we understand that. It’s just figuring out how to manage it in a responsible way,” he said. “They may not run from you, but they’re still burning calories. Their heart rate and cortisol levels go up.”

With that in mind, Parks and Wildlife has winter closures to motorized and mechanized traffic in places like the Crown — which Groves called “the biggest piece of winter range we have in the whole valley.” But there’s still evidence of use, both permitted sort like cross country skiing and not like fat biking. Worse still are dogs off leash, which really tend to alarm deer and elk — and get moose downright defensive.

While Groves acknowledges that you can’t do much about deer or elk around your home, he encouraged folks to abide by the closures and to stay clear of their stomping grounds as much as possible. And don’t think that Parks and Wildlife isn’t looking because of the government shutdown — it’s a state organization mostly funded by revenue from hunting and fishing licenses. Indeed, while the agency manages “in the interest of all people in Colorado,” there is a close correlation to hunting. Right now, Parks and Wildlife is in the middle of its annual age and sex classification, which helps define the parameters for the next hunting season. Groves acknowledged that flying over with a helicopter is a disturbance itself but noted that it only takes a couple of minutes and is “the best tool we have to get the info we need.”

“That’s how we set our objectives for the next year,” he said. “We’ve just been cutting tags out of the system. We’ve cut it back to where there’s virtually no doe hunting.”

And while bear predation and other natural factors may be at work, the human factors seem to be the clearest correlation.

“We’re kind of stable, but other units have dropped off. Then you get away from the big resort areas and the populations are strong,” Groves said. “Looking at the habitat, we should be doing better than we are.”

Colorado Parks and Wildlife is seeking feedback on how to handle White River mule deer herd  in Moffat, Rio Blanco and Routt counties. A 30-day public comment form is available on the CPW website. In addition, the public can provide input directly to agency personnel at a public meeting, 6 p.m., Jan. 23 in the conference room of the Mountain Valley Bank (400 Main St., Meeker).