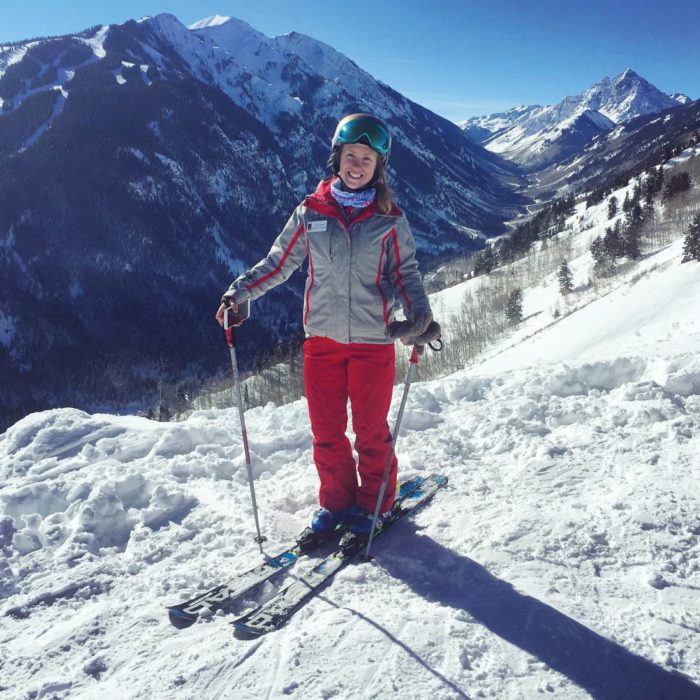 When Sonya Meyer moved to Breckenridge from New York City, going from a concrete jungle to a ski resort was a seductive change in scenery — so much so that her next move took her to the Roaring Fork Valley instead of back to the Big Apple.

Still, it was a big cultural shift to go from working as a professional actor with representation to a ski instructor.

“I told my agent and manager that I was writing a sitcom about ski bums, so I needed to come and research that,” Meyer said. And to be fair, she was at the time. “I was taking a sitcom writing class when I moved. I got my apartment sublet in New York and became a ski instructor and fell in love with that. My boyfriend, who I’m still with now, said to me, ‘I know you love New York, but you know you belong here, right?’ And that was kind of an eye-opening moment for me, so I moved out of New York that summer and have been living in Colorado since.”

But rather than sacrifice her performing career, Meyer has worked to find — and in some cases, create — niches that fulfill her passions in a new milieu: she works as a director and teaching artist with Theatre Aspen and still teaches skiing, now at Snowmass.

“I keep finding ways to perform, and I still think performing is a huge focus on my life, but it’s hard to give up skiing everyday,” she said.

On Monday, Jan. 21, and Tuesday, Jan. 22, at 7:30 p.m., she’ll have a new way to perform, though it’s been a long time coming. Meyer will take the stage at Thunder River Theatre Company’s blackbox as the next star in the organization’s cabaret series.

“I’ve been working on this particular cabaret for almost two years now; it’s kind of been a passion project that I pitched…and finally got a date,” she said. “I’ve had this vision for a while and it’s really exciting to me that it’s all coming together. The cabaret style is a personalized concert that tells a story.”

The performance will tell Meyers’s personal story. In some ways, the Washington state native said she feels she’s living a bit of a double life. On the one hand, she’s a performer. On the other, she’s an outdoor enthusiast and ski professional. This cabaret will be one of the first times she’s been able to find an overlap in that venn diagram.

“Most of my ski instructor buddies don’t even know that I do sing, even though my degree is in voice and my whole life previously was kind of set on, ‘I’m a singer.’ It’s been a big change coming to Colorado and being known for things that are not performance oriented,” she said. “And my performing friends not knowing about my passion for the outdoors: how much I love to ski and camp and hike. So there’s that disconnect, and this is such a great chance to share both those passions.”

Much like her life, Meyer is using the cabaret as a way to balance communicating with different audiences about the things for which she cares most. While the performance itself speaks to one passion, she’s hoping “A Day of Sky: a Cabaret for Climate Change” will translate as inspiration for responsible environmental stewardship, too.

“A lot of the songs I’m doing are songs people already know about, and I am taking it into a new context,” she said of her curation. “What am I trying to say with these particular lyrics? Why did I choose these 10 songs to take you on this journey? My goal is that the audience will be able to leave with kind of a list of things you can do, things you can work on and this is what’s currently being done, just to give them that awareness as well as provide them with some entertainment. All the songs I’m doing have been hand selected and they all have a really special meaning to me. I’m singing Queen and Paul Simon and a lot of songs people will know, but I’m taking them in the context that talks more about their environmental impact or what lyrics stand out ot me for this overarching message.”

There’s another reason Meyer, who’s a classically trained opera singer, opted for a more mainstream musical selection: she wants to speak to a more diverse crowd than just the loyal theater patron.

“I created this show with the non-theater goer in mind,” she said. “I wrote it for my family and friends who are not really interested in theater but are interested in the mountains and the outdoors, and that’s why it’s special to me: it’s for them. I would like to see those people enjoy theater in a new way that reaches to connect with them personally.”

It’s already, of course, incredibly personal to Meyer. She’s poured herself into every aspect of the show, even down to her attire. “I’m making a dress!” she beamed. And without giving too much away, Meyer walks it like she sings it, as even her costume will serve as a nod to her larger environmental message.

Diva Cabaret
What: “A Day of Sky: A Cabaret for Climate Change” performed by Sonya Meyer and accompanied on the piano by David Dyer.
When: 7:30 p.m. on Monday, Jan. 21 and Tuesday, Jan. 22
Where: Thunder River Theatre’s black box (67 Promenade)