The yellow ribbon, one month in 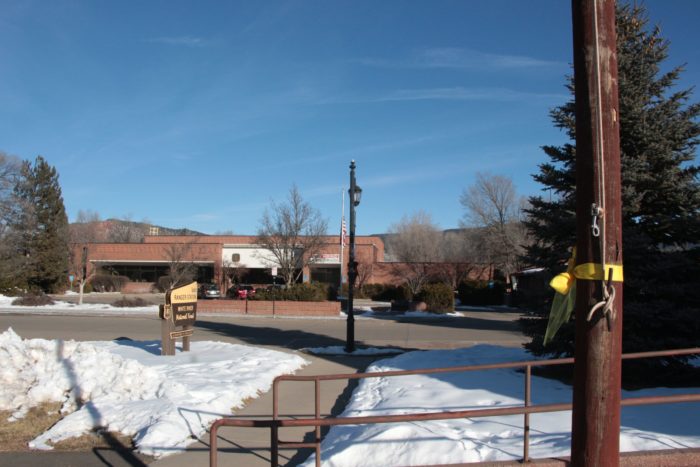 Now in the thirty-third day of the partial government shutdown, the impacts are only becoming more magnified as furloughed workers are bracing to miss a second paycheck and the Supplemental Nutrition Assistance Program, also known as food stamps, runs out of funding in February. Impacts of the shutdown are making national headlines, and a number of them can be translated into local impacts around Carbondale. The U.S. Forest Service was deemed “nonessential” and has been closed since the shutdown began, as evident by the bare flagpole outside the Carbondale office of the U.S.F.S. Aspen-Sopris Ranger District.

“The town has pending applications for special use permits that we’re waiting to hear back on from the U.S.F.S.,” said Jay Harrington, Carbondale’s Town Manager.

“One’s for a micro-hydro plant at Nettle Creek, and another special use permit is for our recreation department in the summertime. It’s really holding us up on some of our initiatives, and we’ll have to start to think around this if nothing changes soon. If this partial government shutdown continues into the spring,” he added, “all the work we’ve put in on Red Hill will be put on hold.”

The Bureau of Land Management is closed as well, inhibiting the planned trail work in the area that will get the renovated system ready for the height of summer use.

How can two federal agencies, right across the street from each other, be in two completely different states of operation? Closure of the U.S.P.S. would be felt by many. The holiday shipping rush would have been impacted. Any checks that aren’t handed off or on a direct-deposit system go through the U.S.P.S., as does nearly every other type of mail.

While the U.S.P.S. is an agency under the executive branch of the U.S. government, it’s also classified as an independent agency, one that funds itself through its products and services and not by the tax-dollars that are apportioned by the federal budget. This allows it to stay open when there is a government shutdown because of a lapse in federal funding.

But looking again, is the flagpole at the Carbondale U.S. Forest Service office entirely bare? Someone earlier in the month neatly tied a yellow ribbon around the pole, at head height, and another at the Post Office across the street.

One furloughed U.S. Forest Service employee saw that ribbon around the otherwise bare flagpole at the office and nearly started crying. “I’m old enough to know the song, and I immediately thought of that,” she said, talking about the 1970s hit “Tie a Yellow Ribbon Round the Ole Oak Tree” by Dawn featuring Tony Orlando.

The historical usage of the yellow ribbon has been to signify a loved one away, serving the country during a time of war.

“It made me feel missed, wanted back, supported,” she said. “This community has been incredibly supportive during this time. Offers of haircuts and meals for furloughed employees on the Facebook Roaring Fork Swap page are all over the place, and the little symbolic gestures, like the yellow ribbon, mean the world. A community doesn’t always have a great relationship with the U.S. Forest Service, but this community is one of the best out there,” she said.

The yellow ribbon speaks: Bring them back to work.