A charitable coffee shop by any name 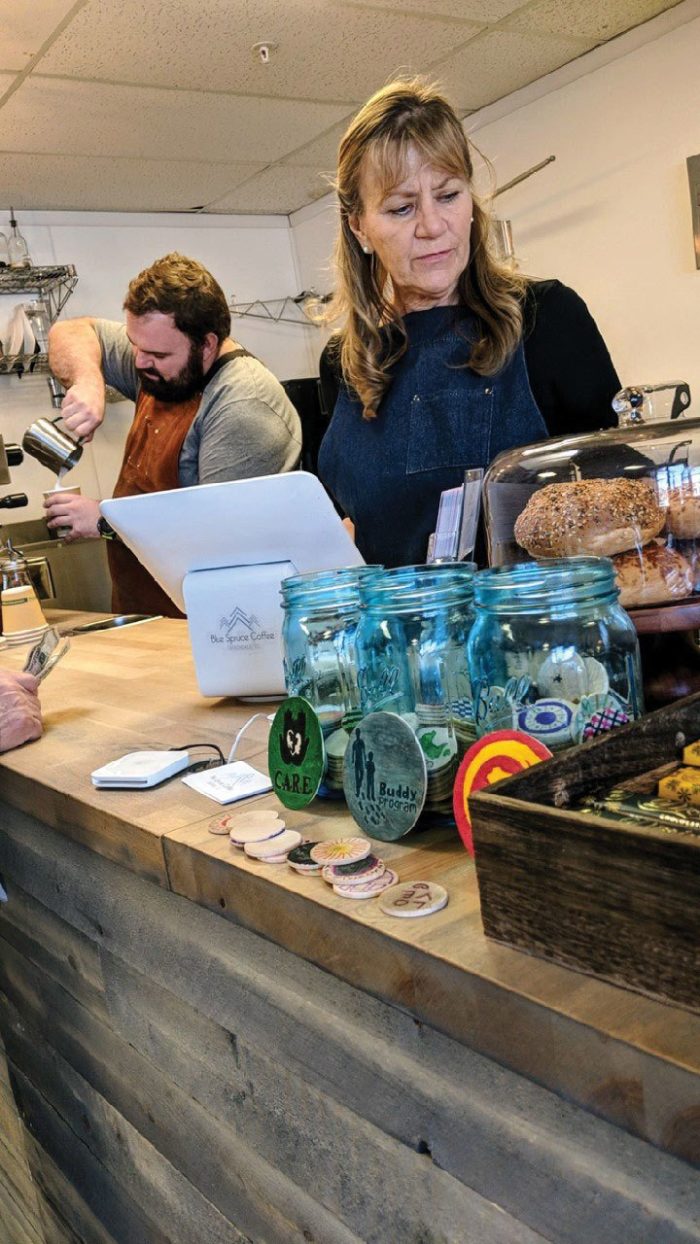 You may have heard of “that coffee shop in the Third Street Center” but could never quite remember the name.

“We were spending a lot of our time trying to help people just remember the name,” he said. “We wanted people to have something that was easy to remember and reflected our birth as a company here in Colorado.”

Regulars at the shop will notice more than just the name and logo has changed: the decor has been updated, as has the menu. Now, in addition to ethically sourced, small-batch coffees and smoothies, peckish patrons will find avocado toast and bagel options available to satiate their mid-morning and afternoon cravings.

But Norton’s not finished. He’s actively exploring renting a commercial kitchen once a week or so in order to produce Blue Spruce baked goods, as well.

“With our coffee, we’re a little control-freak, like: where it comes from, how it’s handled after it’s roasted, that kind of thing. I don’t want to just start doing baked goods without having that kind of control,” he said. “Not only do we want our profits to go to the orphanage and the other local charities, we also want to — through the supply chain — support locals here.”

The orphanage in question is New Day Orphanage in Zambia, where the coffee shop, a registered nonprofit, sponsors a staff member and commits a minimal monthly donation. As Cilundu Coffee, 100 percent of profits went directly to New Day. As Blue Spruce, 50 percent still goes to the Zambian entity, but the other half gets distributed among fellow Roaring Fork Valley nonprofits.

Blue Spruce customers will likely notice the three jars and wood “coins” displayed at the counter. They’re each literal collection jars, currently for Carbondale Animal Rescue (CARE), the Buddy Program and the Third Street Center. Half of the quarter’s profits will be distributed proportionally to the amount of “coins” in each jar. Every transaction earns a customer a coin, and he or she can choose to which entity the profit from that purchase will go.

“We’re going to have basically a fish bowl, where any nonprofit can come in and drop their card off, and then at the end of the quarter when we get ready to send our checks to these three nonprofits and start again, we’ll draw three new names,” Norton said.

There’s an app for that

While you have to physically be in the store in order to choose which nonprofit to support, you no longer have to be physically present in order to place, well, an order.

“The new app’s amazing; we’ve had such a positive response from anyone,” Norton said enthusiastically. “I think a lot of times, especially when it comes to coffee, people want something easy. It’s been really cool: over the last two weeks, we’ve seen a pretty good uptick in Apple orders.”

The Blue Spruce app allows for both pick-up and delivery orders, though there is a $15 minimum on deliveries and are limited to Carbondale city limits. But Norton hopes that the delivery option will be particularly convenient for businesses.

“[A regular] works over at 20/20, and if they’ve had a rough day, the doctor will offer to buy coffee, but… they’re swamped busy, so nobody can come get it,” he said, adding that the app brings a new level of convenience to busy people already in the shop, too. “Some people in the other day, we had a line out the door, and they just wanted drip coffee, so it was nice they could log in, pay for their drip and not have to wait in line.”

The growth is exciting, but Norton is cognizant of managing it. He’s adamant that he never wants to be the next Starbucks or anything near it.

“We don’t want to become this massive, corporate entity. Some of the unique coffees we have, we have them because they’re micro lots,” he said. “Like this Costa Rican we have right now, it’s a women’s producers’ coffee, which is fairly uncommon. They only harvested like four bags of it this year. If we were a huge roaster, we could not have bought it because we would have needed like 20 bags.”