In search of Bonedale’s best burger 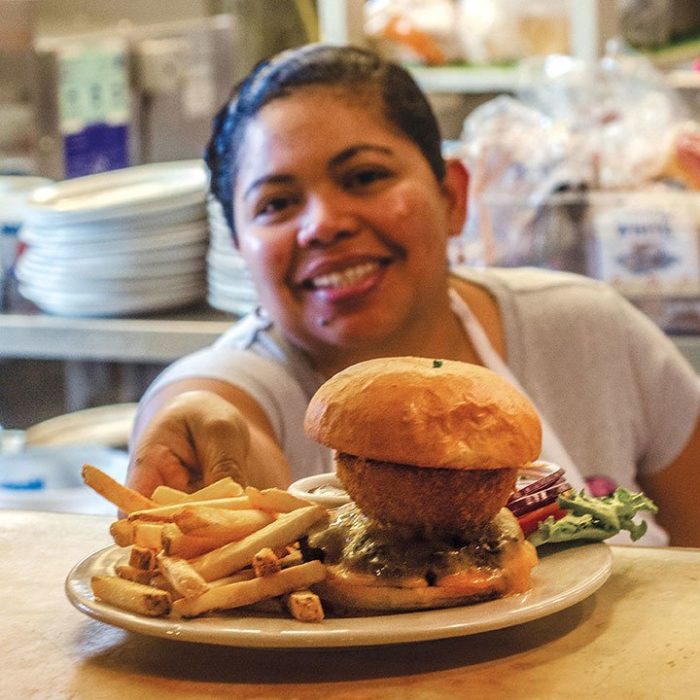 In a ranching town, hamburgers are serious business.

Pretty much every restaurant takes particular pride in their patty, which more often than not comes from a cow that could have been driven through town last year. Diners debate the merits of each — the meat, the toppings, the bun, the sauce — with near religious zeal. Of course it’s subjective, but I was sure there was some chance of consensus, so I set out to prove it.

At 1:15 p.m. on Friday, Jan. 25, I placed take-out orders with eight local restaurants — a pretty comprehensive array of the burger options in the immediate Carbondale area (due to common ownership, we let The Goat stand in for The Pig, as well). To be honest, it felt for a moment like I was doing something wrong — nefariously ordering more food than I could hope to eat. Of course, the restaurants were none the wiser as I went through the same schpiel: a standard burger, no cheese, typical toppings, done medium if they asked.

With the help of my father and Sun board member John Colson, the orders were conveyed to Blue Spruce Coffee, where a team of crack judges were waiting: proprietor Lance Norton, local celebrity chef Susie Jimenez, multitalented journalist Amy Hadden Marsh, Town Planner Janet Buck and fifth-generation native Jeremy Cerise. Chosen for a diversity of perspectives, they were united by their love of burgers.

My methodology was half Mountain Fair pie contest and half Good Mythical Morning. As the assistants compared fries (Fat Belly has the clear edge, in our assessment), the panel was offered a sample of each burger and invited to rate it on a scale of 1 to 10 and guess its source.

The last part proved hit or miss, with either the entire group guessing correctly or none at all. Cerise proved slightly more adept and, thanks to correct identification of The Smithy and The Red Rock Diner, was crowned Burger King.

“I eat lots of burgers in this town,” he observed.

But back to back and head to head, trends emerged pretty quickly.

“In the restaurant industry they try to upgrade it and do too much crap to it,” Jimenez said. “This reminds me of simple childhood yumminess.”

In the end, it landed firmly in third place — a solid finish for the cheapest burger we sampled at $6.18 and a nod to the quality of semi-defunct owner/supplier Crystal River Meats.

The second place finisher proved more controversial, as SILO, lacking a standard set of toppings, responded to my invitation to “surprise me” by adding caramelized onions, avocado and kale. The last, in particular, was a hard sell, though in Buck’s opinion, “it works”.

“It must be good, because we’re all quiet and enjoying it,” she said.

It’s worth noting that SILO is one of the few local restaurants to use a Front Range beef supplier, thanks in part to a taste test of their own. And no one seemed put off by the meat itself, but rather its relationship to the toppings. Buck still backed it with her highest rating of the night, while Cerise pulled the numbers back down with a middling assessment. It thus took second place to a grind with more universal acclaim.

“That’s some good beef, dude,” Norton exclaimed as he took his first bite of the mysterious winner.

“I almost felt like I had a little bit of steak,” Buck said.

The bun met Hadden Marsh’s approval for the right ratio, with very little else to distract. It turns out the restaurant in question has been deliberately cutting down on waste by only providing requested toppings in takeout orders.

“This one doesn’t even need toppings,” Cerise asserted. “This stands on its own.”

“Just to be able to have it without any sauce any anything — I can’t imagine adding everything else to it,” Jimenez agreed.

No one seemed surprised to discover their top choice was The Pour House. It reaffirms the decision to switch to Crystal River Ranch beef.

“It amazes me how burgers can have such different flavors,” Buck observed at one point. “I never realized that before.”

Each, in her opinion, had points in its favor — the Goat’s was the best cooked, the Smithy had the best meat, Beer Works the best toppings, Roosters the best presentation, and the Red Rock Diner the best bun.

Noted Norton, “I think the takeaway from it all is that we live in a great place with a lot of great burgers.”