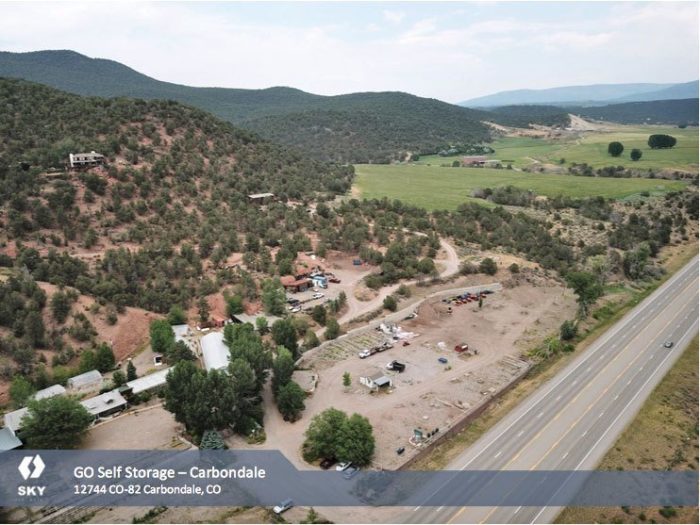 The Planning and Zoning Commission heard proposals for two separate self storage facilities during its Jan. 24 meeting — but only to submit comments to Garfield County, not to make any decisions on the applications, Planning Director Janet Buck clarified.

So why did the commissioners hear from the applicant, then? Because of the proposed units’ proximity to Carbondale, Planner John Leybourne said, adding that the town and county have a sort of gentlemen’s agreement on these sorts of matters: if a development is within three miles of the Carbondale town limits, the county gives P&Z an opportunity to act as a referring entity.

And there was consensus among commissioners regarding first impressions.

“The commission generally wasn’t really keen on having either of the projects… that close the city,” Leybourne said. “The biggest one — the one that impacts the town the most — it’s called GO Self Storage. P&Z had comments on the size, location… and essentially the lighting.”

GO Self Storage is a proposed mini storage facility, but in the context of the rest of Carbondale, the building is downright supersized, Leybourne continued about the commissioners’ concerns. Preliminary plans, according to the application, “indicate approximately 85,000 square feet of structures configured in multiple buildings. The main building is anticipated to have approximately 75,000 square feet of floor area on three floors.”

The proposed facility would occupy 2.7 acres in the Dixon Subdivision, where Planted Earth operates, at 12744 Highway 82.

“You’re looking at a 50-foot grade change to the roof of the building itself,” Leybourne said. “One of the biggest concerns for us for the GO Storage is just the size and the lighting, just because it’s going to be so visible from town. What’s normally dark over there is going to be lit up… it’s going to be a big box that you’re going to be able to see from portions of town.”

While safety did come up as a secondary concern, the plan does include some security precautions.

“The applicant did put in there that it’s going to be fenced, computer-coded entry to the gates,” Leybourne said, but then added that “there’s also going to be a kiosk where anybody can roll up, rent a unit and move in whenever they want. But during normal working hours, there’s a staffed office there, too.”

The second mini storage facility proposal seeks to develop almost six acres at the Highway 82 and County Road 100 intersection, near Catherine Store, according to Town Manager Jay Harrington’s weekly update to staff, trustees and others (because of an error on the Garfield County website, the actual Blue Mountain Mini Storage Facility application was unavailable).

“That’s actually a platted residential subdivision that they’re replatting and adding storage to one of the lots there,” Leybourne said, noting an already existing land scarcity for housing. “It’s kind of taking away form platted residential units to have self storage area.”

While Tristan Francis, second alternate on the P&Z Commission, acknowledged the overarching trepidation from the town toward the plans, he also acknowledged a need for storage — though he wasn’t sure the applicant’s proposals aligned with Carbondale’s comprehensive plan.

“There’s definitely a need in Carbondale for storage — housing is so limited that people have to store their things elsewhere,” he said, but noted the problems with the currently proposed solution, especially with GO Storage. “The P&Z wasn’t inclined to have such a prominent structure next to Red Hill and visible from the middle of town, besides the traffic and safety concerns. The one on the south side of town wasn’t seen to be as undesirable, but we’d still like to see a different use for that lot.”

The Sopris Sun was not able to reach the planner and applicant representative, Doug Platte of the Land Studio, until close to deadline, and he was unable to provide comment on short notice.

While the decision is ultimately in the hands of the Garfield County Commissioners, initial opposition to his storage facility plans isn’t a new obstacle for applicant Wes Grammer. In 2017, the Kansas City Business Journal reported that neighboring business owners vocally shut down his proposals to convert a 1920s-era historical warehouse into storage.