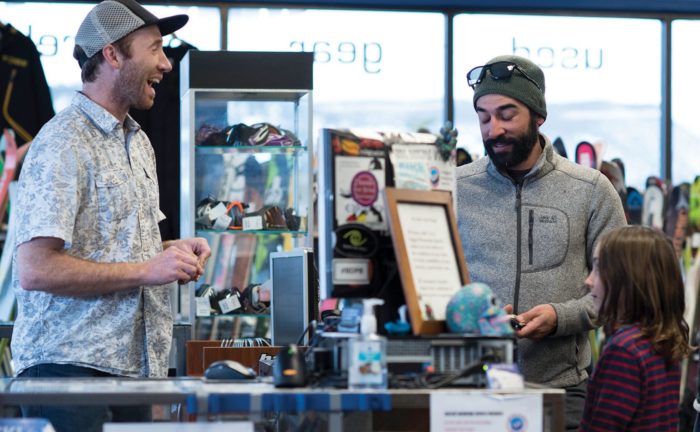 When you walk into Ragged Mountain Sports, it’s easy to get drawn right into the racks of skis or casual wear featured in the center of the shop.

That is, unless you’re a dog person. If that’s the case, you likely won’t make it past the couch on your right, where Shire is probably posted up for his shift.

“Laziest employee we have,” co-owner Tyler Vaughan quipped about the mellow canine, who at the time was lounging in front of the counter.

Vaughan, too, maintains a carefree quality — but that doesn’t mean he’s low energy. Quite the opposite, in fact. He speaks easily but quickly and is just as quick to laugh. It’s hard to be stressed when your livelihood is all about sharing what you love.

And that’s exactly the mission behind Ragged Mountain Sports, and in more ways than one. As a consignment store for outdoor gear, the shop is able to create an economic opportunity that makes the mountains that much more accessible, Vaughan noted.

“We’re taking stuff and we’re putting money back into people’s pockets,” he said. “One of the most rewarding aspects of the job is with kids stuff, because the kids grow out of it so fast that this has really turned into a recycler for families. They’ll sell their stuff, they’ll get money on their account, and then they can come it and buy skis that are 10 centimeters bigger. We can’t all afford to buy skis every time somebody grows a couple of inches.”

“We kind of joke about what happened with all this stuff before Mountain Ragged existed,” he said.

But the impact in the Valley is serious business. “It’s a ton of stuff that, instead of making it to the landfill, is making it to families. I think they say that a resold jacket adds a life of like three to five years to a piece of clothing.”

However, Vaughan, Aisha Wienhold and Steve Denny (the husband-and-wife duo that make up the remaining ownership at Ragged Mountain) made an early pact regarding the kinds of brands they’ll accept.

“We focus on not selling fast-fashion brands and selling high-quality brands,” Vaughan said. “Also the brands that are making an environmental statement, like Patagonia, Outdoor Research, North Face… all these companies are making a huge stand for the environment, and we’re just giving that extra life… I think in the beginning, we did get a little bit of flack about not taking certain brands, like Gap or Old Navy… but I think over the years, it has got less and less intense with people trying to drop stuff off that is outside our ballpark.”

That doesn’t mean that if an aspiring consignor comes to Ragged Mountain with brands or items outside the store’s realm that there aren’t other options, he continued.

“There’s also great consignment shops in the Valley as well that can take that kind of stuff, like Backdoor Consignment and Misers,” he said. “We just try to do our best job of educating everybody on what stuff we sell and why and make [that] statement and then also [inform] some people where they need to go just to keep stuff out of the landfill.”

“Right before the expansion, we were doing everything we’re doing in the back room over here, we were doing behind the desk. The walls were closing in a little bit, so the expansion allows us to have a room to check stuff in,” Vaughan said. “It also allowed us to have a kind of utility room, and it can become a sales room. It helps us shuffle the seasons from winter to summer and helped us get out of some storage units.”

While Vaughan and the Ragged Mountain team are content in their newly renovated space for the foreseeable future, there is plenty of room for further growth in the store’s educational and donation programs.

“One of our main goals is our educational courses, like skate-ski clinics,” he said. “We want to do uphill skinning clinics. Keeping our rentals going for the community, so we’re going to do nordic skiing and stand-up paddleboards in the summer.”

And those programs don’t have to exist in a vacuum, Vaughan said. In fact, they’ve already partnered with the Bike Project to ensure Crystal River Elementary third graders all had bikes for the school’s big field trip, an overnight bike trip to Rock Bottom Ranch. Aaron Taylor, Bike Project founder and Way of Compassion director, sees plenty of overlap in the entities’ missions.

“There were many students who would not participate either because they may not have a bike or they don’t know how to ride a bike,” Taylor said. “We said, ‘We’re going to give you the bike for the field trip.’ Then over the trip, they found out they got to keep the bike. They’ve created a culture around giving and kindness,” he added about Ragged Mountain.

CRES isn’t the only school to have benefitted from Ragged Mountain’s attention.

“We just did a big climbing shoe donation for Basalt High School because they just got a new gym,” Vaughan said. “I just think that we rely so much on the community, and it truly takes a village to create a store like this. Without our few thousand consigners, we wouldn’t have the inventory to build the community around Ragged.”

A business of giving

Deborah Herrell, owner of LuLu’s Thrift Shoppe, 570 Highway 133, maintains that generosity is a core value in the secondhand culture, and she, too, puts her money where her mouth is in that regard.

“Not only does everything get reused, it’s a business of giving; that’s what it’s about,” she said. “Our mission statement is that we assist others in moving from poverty to prosperity and from despair to dreams.”

Sometimes, that means simply making someone’s day by providing a welcoming space with an interesting inventory.

“I actually go across the state and pick up the majority of my donations. That’s why I have such unusual donations,” Herrell said. “I like to think of us as the happy store. Every single customer is greeted; we know half their names. Half of them come in and give us a hug. Everyone who works for me can say what our specials are in Spanish.”

And, sometimes, lifting someone out of poverty is more even more personal, like when Herrell used a percentage of her store’s profits to help a local man whose daughter had undergone an expensive heart surgery. “They needed rent money, so I paid his rent,” she said. Currently, she’s focused on sending Kenyan girls to school.

Herrell is no stranger to the Ragged Mountain crew. “When I first opened in Carbondale, I was in that plaza, then I moved down to where I am now.” Herrell often sends people with outdoor gear to her former neighbors, and they’ve donated to her shop as well. “People all over the valley that work in the business, it’s a small culture, so we all kind of know each other.”