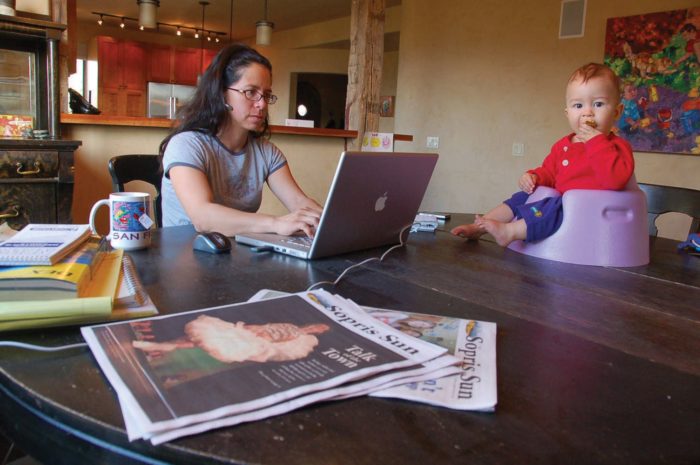 Winter 2009 was probably the worst time to start a newspaper, much less take on the role of editor.

Across the country, large daily newspapers like the Seattle Post-Intelligencer and Denver’s Rocky Mountain News were going out of business and Carbondale’s own Valley Journal suffered the same fate in December 2008. I was working as the Arts & Entertainment editor at the Journal but was let go right before Christmas. I had one son in grade school and another less than a year old. What was a low-paying journalist with no other skills set to do?

Only a week or two passed before longtime Carbondale local and former Valley Journal Editor Becky Young got in touch with me to talk about the town’s state of affairs. She said she and some other residents were considering launching a newspaper to highlight all the good stuff going in on the community they loved, but also to keep tabs on town council and planning and zoning. She asked if I could put together a list of the news stories that were left “hanging,” so to speak, as a result of The Valley Journal’s demise.

I started making a list. From aspiring singer-songwriters and local business owners to development projects and town budget concerns, there was so much worthwhile news to cover in Carbondale. The list grew. When I sat down with Becky and some of other community members who came together with the seed to start a newspaper, I think the list was at least two pages long.

Some readers know the story of how The Sopris Sun was started; others may not, but it’s worth knowing about the grassroots effort that, to this day, is a stellar representation of the strength of the Carbondale community.

Upon the shuttering of The Valley Journal (the same company that publishes the Post Independent and Aspen Times), Becky and a few other residents had gotten together to address a big problem: How would citizens know what was going on if there was no newspaper? This group — which later became the founding board of directors and included Barbara New, Russ Criswell, Peggy DeVilbiss, Jody Ensign, Allyn Harvey, Colin Laird, Patty Phelan, Liz Phillips and Becky in those first months — set about the monumental task of launching a new nonprofit newspaper, supported by individuals and businesses.

My list of stories in the balance must have made an impression on The Sopris Sun founders because it only took another week or so to get offered the job of editor. I was offered the equivalent of half-time wages. I estimated it would take about 60 hours to get the newspaper produced each week, especially in the beginning. They flat-out acknowledged that. I said, “OK. What have I got to lose?”

Harvey had left his position as the managing editor of The Aspen Times less than one year prior and “still had a lot of newspaper ink in my blood,” as he says. Young phoned him as well to see if he could help.

“Becky and Russ were already in full motion by then, and they certainly deserve credit for really launching this thing. Becky had design ideas in mind, and Russ was already raising money,” Harvey recalled. “Literally five weeks after The Valley Journal closed, we launched The Sopris Sun with about 6500 bucks in the bank. Those early donations from people like Emma Danciger and Russ and Linda Criswell, and local businesses were critical, too.”

Criswell took on the task of gathering newsboxes (ironically from the company that had owned The Valley Journal), cleaning them, repainting them and putting them at key distribution spots around the mid-valley. Jody Ensign took on the task of selling ads. The volunteer board of directors addressed organizational issues, administrative duties, and kept hitting the pavement to inform the community about the newspaper and gather more funding.

Harvey and I stayed up into the early morning hours that first deadline, writing and editing stories. Young handled the graphic design, created ads and also burned the midnight oil to lay out all the stories and get the files to press. When I saw the first issue, I was filled with pride and humility. That feeling blossomed when I would hear other Carbondalians brag about “our” newspaper.

On a personal and professional level, the editorship was a job and an opportunity (albeit a lot of hours for little pay). But it was more than that. It was a chance to make history, although I didn’t think of this at the time. As newspapers were dying, here was this bold little town launching its own newspaper as a nonprofit. Among other media outlets, the Los Angeles Times sent a reporter to Carbondale to write a story about the founding of The Sopris Sun. That story was picked up and published in newspapers across the nation, bearing headlines such as “Fine, We’ll Just Publish the Newspaper Ourselves.”

More importantly, helping get The Sun off the ground was about the importance of community journalism. Who else would tell our stories? It was a chance to make sure that the long list of stories about Carbondale and its people didn’t die on the vine.

Harvey, who ended up serving nearly three years on the Sun’s founding board of directors, feels similarly about the role of newspapers. “I think at our third anniversary fundraising party, I remember we had this screen with a video montage going of all the covers of The Sopris Sun. I lost my breath a little bit watching it — seeing these covers and these pictures of kids, people, animals, events in our community and the moments we captured, just with that front page.”

Ten years later, I am proud to look back on the growth of The Sopris Sun. Over the years, it has been managed by a range of dedicated and knowledgeable volunteers, a board of directors that have worked to ensure there is funding for an editor, a part-time reporter, a graphic designer, a salesperson and a staffer to distribute each week’s paper. The list of stories about our sweet little community is far longer and more involved than two pages these days. I’m just grateful we have a newspaper to tell those stories.