Comedy is serious business in Sopris Theatre’s ‘The Nerd’ 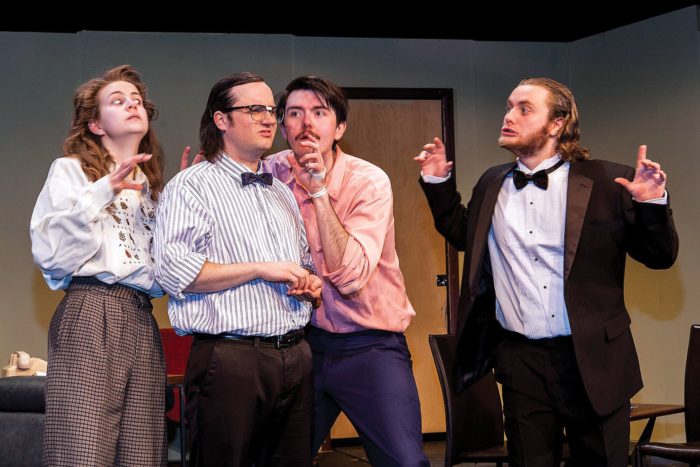 In polite company, there’s a social contract regarding how we interact with one another. But what happens when the company isn’t so polite?

That’s the question playwright Larry Shue poses in his two-act comedy “The Nerd.” And it’s the question Colorado Mountain College’s Sopris Theatre Company isn’t shying away from in its adaptation of the play, which opens at 7 p.m. Friday, Feb. 15.

Director Brendan Cochran made an active decision to lean into the farce.

“This show’s been an interesting show, because there’s a few things that the playwright throws at you that we’ve really had to work and figure out how we’re going to make it happen,” he said. As if on cue, Suzie Brady, who plays female lead Tanzy McGinnus, asked Cochran from which scene he wanted to begin rehearsal.

“Let’s just go from bags on the heads and get at least to spinning and humming,” he replied casually.

Without missing a beat, the actors took their places and the lights dimmed. And yes, the scene involved the characters all putting paper grocery bags over their heads and eventually humming and spinning in circles. None of the characters are particularly pleased with this situation — they’re going along with it to appease their friend and host Willum Cubbert, played by Joshua Adamson.

Cubbert, in turn, is trying to placate surprise guest at his birthday dinner Rick Steadman. Steadman, a fellow ex-GI, saved Cubbert’s life in Vietnam. Cubbert woke up in a hospital after being shot and credited Steadman for his rescue. The two men had never met in person, though they’d exchanged letters, and in gratitude and typical Midwestern hospitality, Cubbert wrote that as long as he was alive, Steadman would always be welcome in his home in Indiana.

But when Steadman actually shows up to Cubbert’s dinner, his behavior is over-the-top, comically bad. So much so that Steadman hijacks the night by manipulating everyone into a game of “Shoes and Socks,” which leads to “bags on the heads” and “spinning and humming.”

The game doesn’t end well, and Cubbert, an architect, finds himself sacrificing an important business relationship with hotel mogul Warnock “Ticky” Waldgrave, who leaves with his wife and son in a huff. Steadman, who successfully drove away Cubbert’s friends and tenants Axel Hammond and Tansy McGinnus as well, concludes the scene with a screeching rendition of the national anthem after a downtrodden Cubbert retires to bed.

And that’s just in the first act.

“As long as the chaos is controlled and everybody is safe on stage, it’s great,” Cochran laughed. “I really do believe that comedy is much harder to perform than drama… In drama, you’re really focused on the depth of the emotion and the connection between the characters, and of course we want to do that with these guys, too, but there’s so much more technically going on that has to be done precisely. Otherwise, the choreographed chaos turns into real chaos, which isn’t as much fun to watch.”

At that point in the conversation, his actors were still near-blindly humming and spinning on a stage with a two-foot drop at its edge. But they executed their choreography beautifully.

“If you’re going to draw a real strong theme out of the show, it’s sort of, where do we draw the line between our tolerance and our civility and just these outrages that are thrown at us — which is something that I think is relevant in this day,” he continued. “Where do we draw that line between being civil, polite people and really having to be firm in what we believe and stand up for ourselves when we need to, and that’s sort of our main character’s journey in this show.”

Of course, at its core, the show is a comedy.

“More than anything, I think there is such a visceral release in just being able to come together as a group and laugh at something,” Cochran said.

“It’s just insane. It’s like, is any person really that bad?” he asked emphatically. “I mean, that bad?”

That’s a question for the second act.