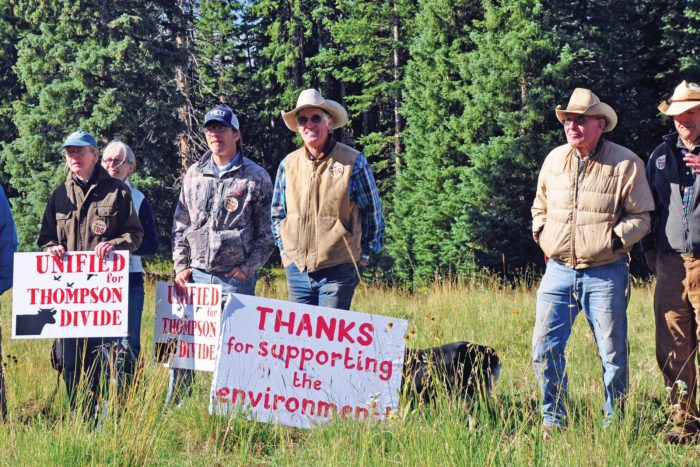 All those protests, letter-writing campaigns, and yard signs to protect the Thompson Divide are reverberating in the halls of Congress.

“All of the proposals in the CORE Act were started at the local level and drafted with county commissioners, businesses, sportsmen, and conservationists over the last decade,” said Beckham. She added that the bills were combined to have a better chance to break through the gridlock in Congress. “Lands bills always pass in a package, and given Coloradans’ thoughtful work on these proposals, [the Senator] does not want any bill to be left out,” said Beckham.

Stacey Patch Bernot, 5th generation native of the Crystal River Valley and former Carbondale mayor, told The Sopris Sun that permanent protection of close to 200,000 acres in the Thompson Divide is a big win for those who came together to keep the town’s backyard safe from fracking and energy development. “This really galvanized our region,” she said of the time when locals from all walks of life were working on protecting the Thompson Divide.  “The coalition of ranchers, outdoor recreationists, hunters, fishermen, we don’t always get along,” she explained. “We’ll fight with our neighbor over water! But for the Thompson Divide, we all came together because we saw the importance of protecting this.”

The Thompson Divide section of the CORE Act withdraws Federal land from oil and gas leasing. “It overlaps a good portion of the parts of that original Thompson Divide boundary that are in Garfield, Pitkin, and Gunnison counties,” explained Peter Hart, staff attorney for Carbondale’s Wilderness Workshop. “It also includes some additional acreage outside of the Thompson Divide, extending farther south.”

The Act acknowledges valid, existing lease rights within the withdrawal boundary but also gives energy companies that hold those leases a way to cash out. It’s called an exchange and the energy company can get credits from the Federal government if it wants to give up lease rights.

“The credits could be used to pay rentals and royalties that they may owe the Federal government for other leases or to acquire new leases someplace else,” said Hart.

There is one caveat for the exchange. Even though the Act does not name a specific energy company that has leases within the legislative boundary, it states that “any leaseholder with a Wolf Creek Storage Field development right shall permanently relinquish” all of those development rights if the company wants to exchange other leases on the Thompson Divide.

“SG Interests has the development rights underneath the Wolf Creek Field and three leases at the top of McClure Pass in the Huntsman Unit,” said Hart.

That means if SG wants to exchange the Huntsman Unit leases, it has to give up development rights under the Wolf Creek Field, which is in the heart of the Thompson Divide. Storage rights in the field would not be affected.

SG Interests has not returned requests for comment but Shannon Beckham said that Senator Bennet’s office communicated with SG Interests ahead of the introduction of the 2017 Thompson Divide Withdrawal and Protection Act and the 2019 CORE Act. “The exchange language is nearly identical to the 2017 Thompson Divide bill, which was crafted based on extensive discussions with local communities, elected officials, and oil and gas companies,” she explained.

Gunnison Energy (GE) also holds leases inside and outside of the Thompson Divide legislative boundary. But, Beckham said the boundaries were modified in 2015 so the company could produce natural gas from existing leases in the Muddy Creek area. “GE can still produce the gas from certain leases with well pad locations outside of the revised legislative boundary of the Thompson Divide,” she explained.

The CORE Act also protects close to 29,000 acres around Camp Hale, between Minturn and Leadville. Built in the 1940s for winter warfare training during World War II, Camp Hale was home to the 10th Mountain Division and is now a national historic site. Will Roush, director of Wilderness Workshop, said the camp’s wartime contribution is only one reason to protect it. “A lot of those veterans came back to Colorado and took their experience in the mountains and turned that experience into essentially the modern outdoor recreation economy,” he said.

“It’s not just protecting the actual camp where there were a bunch of buildings,” said Roush. “It’s protecting the whole landscape that those soldiers trained in and had their seminal experience in the out-of-doors so that now, future generations can go out and experience that landscape in a similar manner to the way the veterans did in the ‘40s.”

Stacey Bernot cautions against public complacency. She said the battle to save Thompson Divide is not over. “The CORE Act shows the importance of Thompson Divide to be coupled with these other three very important pieces,” she said. “I want to make sure that we’re not left out or carved out, that we have every right to be in this legislation.” Referring to the 2017 protection bill, she added, “We want to work with the Federal government to make sure that this goes through this time.”

The Colorado Outdoor Recreation and Economy Act was introduced in late January and has been referred to committees in both the Senate and the House.