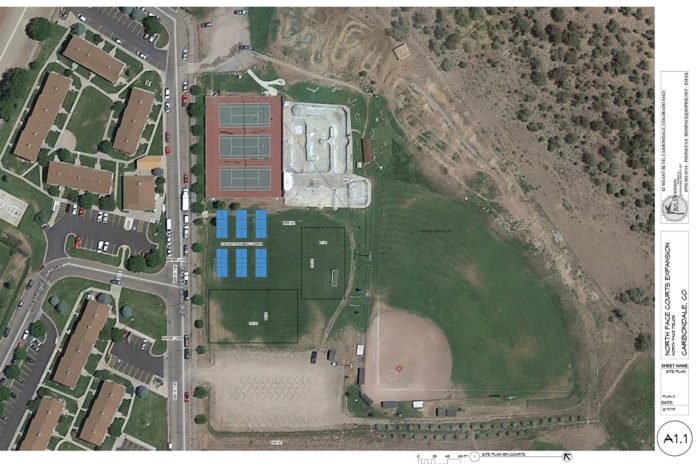 Eric Brendlinger estimated that “only like two” people from the public attended the Feb. 13 Carbondale Parks and Recreation Commissioner meeting, at which three North Face Park master plan designs were presented.

The Parks and Recreation Department director isn’t worried about the low attendance — in fact, he sees it as a sign of a job well done. After all, the meeting wasn’t the first time the department had floated the design options: the plans have been publicly available on the Town of Carbondale website with a four-question Survey Monkey that allowed people to make their preferences known.

“We had about 105 responses, and about 73 percent of those preferred Plan C,” he said. “Did we do our job? I think we… did. I think people were satisfied with what was presented.”

Plan C, as Brendlinger described it, allows for six dedicated pickleball courts immediately south of the existing tennis courts at the park. Importantly, it also maintains plenty of open space for other uses and parking.

“[The goal] was to have a design that didn’t eat up the parking, because parking is paramount, and didn’t eat up too much of the green space so it could be used for other purposes,” he continued, adding that he foresees the remaining area being used for soccer, lacrosse and special events.

The Parks and Recreation Commission voted easily to recommend Plan C as its preferred plan to the town trustees for approval of a Memorandum of Understanding between the Carbondale Parks and Recreation Department and the Roaring Fork Pickleball Association (RFPA), which as agreed to fund the project. As the space was always zoned as North Face Park recreational use area, no official rezoning vote was required.

“Roaring Fork Pickleball Association has said that they want to fund the design [and] construction of those six pickleball courts; they just needed land to put them on and the green light to do so,” Brendlinger said. “They’re going to go out and fundraise for this process and even potentially bank-finance some of it also, so everything’s off the town’s plate as far as construction costs.”

While that certainly fast-tracks the development from a municipal perspective, it doesn’t mean a rubber-stamp approach, either.

“Our Parks & Recreation Commission is like, ‘That’s great, but we’re still going to do it right.’ It’ll have a long-term master plan to make sure everything else we want to do is thought through,” he said.

As for the RFPA, board member Jim Noyes emphasized that the group’s next step is to actually fundraise the money necessary to break ground on the project.

“We don’t know how we’re going to do it, but we’ve committed to we’re going to do it,” he laughed, adding that the project will require about $225,000 in total. “We have ideas… we will sell court sponsorship signs on the inside of the court; some of this will come from avid pickleball players like myself, and others will go out and sell it to retailers and do-good organizations like Rotary.”

Any sponsoring entities would get plenty of exposure for their investment, he continued.

“Between May and October, we put in 5,000 player hours, playing only four days a week, only four hours at a time,” Noyes said of RFPA. “These will be the only tournament-quality, dedicated pickleball courts in the Roaring Fork Valley.”

Brendlinger sees opportunities to make Carbondale a destination for tournaments, which will add to the tourism and recreation industries.

“Pickleball itself is a popular sport — I don’t think it’s a fad; I think it’s here to stay. It’s the fastest growing sport in the United States,” he said. “There’s definitely a following and a desire, and if Carbondale is the town to put some dedicated pickleball courts next to tennis courts, we can host some pretty big tournaments. So there’s some economic benefit, too.”

There’s also a public benefit. While RFPA would receive guaranteed playtime in return for its investment, the proposed pickleball courts will be public.

“I think it’s a good opportunity, really, for Carbondale to build these courts. It’s really a donation of public courts with some guaranteed play time, which would make sense,” Brendlinger said. “People will be able to play on them. People will be able to reserve them through the Parks and Recreation Department; people will be able to just drop in and play on them on a first come, first serve basis. If you show up and all the courts are taken and it’s not a scheduled other use, then you get a court in an hour. That’ll just be managed like other tennis courts.”

Noyes doesn’t have any doubt the courts will be busy once built and open for use.

“[Pickleball] was sort of just a local, regional little thing going on until the last 10 years, it started to really get some traction. In the last five years, it absolutely exploded. The only thing keeping it from exploding even more is the lack of courts,” he said, adding that a pickleball court is about a third of the size of a tennis court.

The sport also uses custom paddles and a Wiffle ball, which allows for more volleys than in tennis. That makes the game more accessible, too, Noyes contended. And while the uninitiated may perceive it as a phenomenon for seniors, it’s made its way into Basalt Middle School.

Currently, limited court capacity has also limited how many people can play and when. Noyes hopes that the new courts will change that.

“We can start working with the schools, Super Seniors, Challenge Aspen — all kinds of people who’ve said, “We’d love to learn,’” he said. “This will be a huge, probably one of the most used park district assets that we have, both in town and out of town. The reason for its popularity is it’s incredibly easy to learn to play at a level where you can have fun right away. Pickleball, if you have any eye-hand coordination at all, you can be having fun in a matter of 15 minutes.”

But, he cautioned, just because pickleball is easy to learn doesn’t mean it’s easy to play. “The challenging thing about it is you’ll spend the rest of your playing life trying to become good at it.”