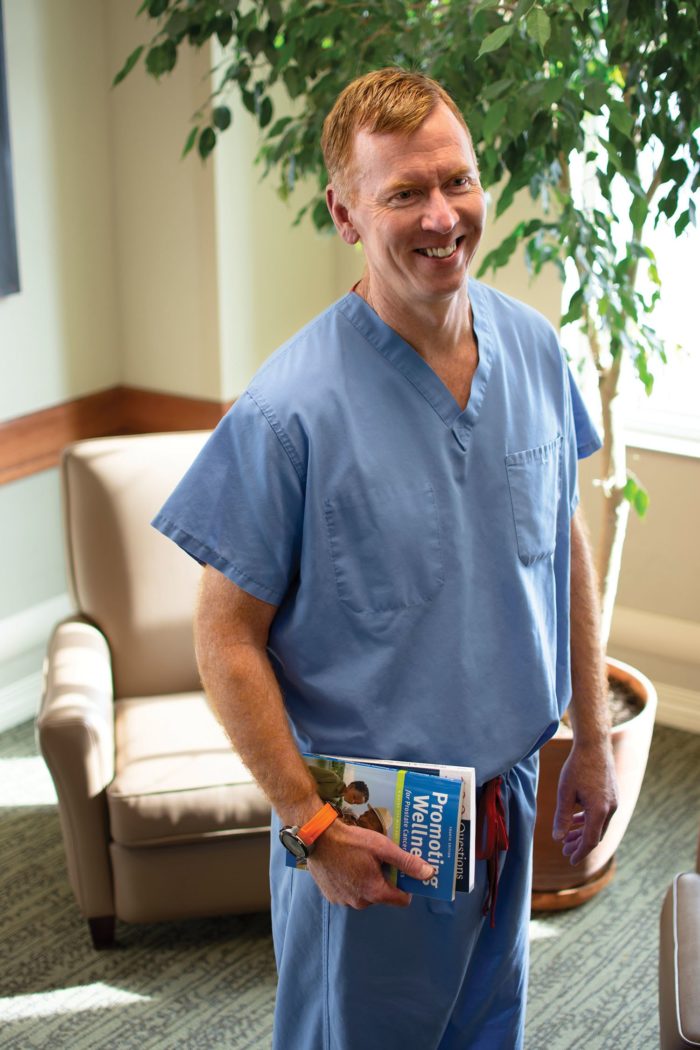 What does Valley View Hospital (VVH) have in common with the Mayo Clinic and Cleveland Clinic, the country’s top ranked hospitals by US News and World Report? Once Carbondalian Brian Murphy fully settles in as CEO this summer, they will all boast physician leadership.

VVH announced CEO Gary Brewer’s retirement in mid-February. The 67-year-old Glenwood Springs resident served in the role for 21 years. During that time, the hospital added 400,000 square feet in medical and administrative offices that allowed for added services, including neurosurgery, cardiology and cancer care.

“They’re big shoes to fill, there’s no doubt about it,” Murphy said.

Murphy, for his part, has 18 years invested in VVH as a board-certified urologist with the Rocky Mountain Urology Center. His titles at the hospital have also included chief of staff and chief medical officer — and that’s in addition to his time at his alma mater, Duke University, as associate director of the school’s urology residency program.

“To be honest, my biggest struggle was trying to decide, was I ready to give up urology that I’ve worked for 25 years trying to get really good at? When you spend most of your life focused on practicing medicine and becoming as skilled as you can be — although I was very intrigued by the opportunity to become the successor to Gary — it was a really slow, long process for me to get to that point,” Murphy acknowledged, still wearing his scrubs from the operating room. “After lots of reflection and vetting, it’s the right move.”

And while the transition will require “giving up” urology, Murphy will always remain a physician at heart, and that’s an identity he feels will serve him — and the hospital — well.

“Physicians and people that have been directly in patient care… often command respect and identify with the colleagues and understand down to the physician and nursing level where the obstacles really are, and what we can do to make their care as good as it can be,” he said. “It’s not that the administration can’t do that, but when you’ve done it for 25 years yourself, I can listen to somebody and I know exactly what they’re talking about.”

Only about 5 percent of American hospital executives are physicians, according to a 2014 American College of Physician Executives report, but of the 300 most highly ranked by US News and World Report, physician-led hospitals scored about 25 percent higher than their counterparts in overall quality.

To be clear, correlation does not mean causation, and Brewer’s legacy is firmly solidified in the community as one that oversaw sweeping expansions that added services and employment in the area, Murphy emphasized.

“It’s not just the physical growth; that was the parallel of the service growth. Instead of all those folks having to drive to Grand Junction or drive to Denver to get cardiology or cancer care, to know they have it here in their backyard, it’s great for the community,” he said.

He knows the trajectory well because he was part of it.

“When you’re on the ground floor in the way this thing has expanded, I think I have better insight right from day one on how we’re best prepared to handle whatever challenge needs to come next, rather than someone from the outside coming in and taking three to five years just to understand who the players are, where the strong aspects are and the weaknesses if you will,” he said. “I love this place. I was here for four years, got offered this amazing opportunity to go back to the university I trained at, only to decide that this is just too good a place to not be a part of it,” he said.

“I think our hospital is a fantastic, incredible resource for our community. To be entrusted as the steward of this incredible asset, I’m proud and I’m excited to be a part of it,” he said. “You’ve got to have great physicians and nurses, incredible support staff and get everybody to pull in the same direction. That is leadership. That is getting an integrated, collaborative, engaged work culture so that quality just flows from that.”

He’s not worried about cultivating that dynamic, he continued, because he’s already seen it in action. Now, he hopes his colleagues will continue to approach him with their thoughts about the future.

“I’m going to tell all the people that I’ve worked with for 20 years… that every time they think that there’s some issue, or something that could be improved upon, that you let me know. You have to be willing to do that,” he said.

Of course, he’s keenly aware of some pressing areas for improvement already: mainly, reigning in cost of services without sacrificing quality of care.

“And the plans have already started,” he said. “The most recent initiatives for cost containment were for in imaging studies — and part of that was driven out of competition with Compass Peak, but it was also internally a recognition on our part that we needed to be more price competitive.”

Compass Peak Imaging is a private operation in West Glenwood opened by VVH veteran Jeff Vichick and Elizabeth Kulwiec specifically in order to “address the rising cost of healthcare and the need for regional, patient-centric imaging services,” according to its website.

But Murphy contends that reexamining pricing structures at the hospital goes beyond traditional market competition, noting ballooning rates across the entire healthcare system.

“Our surgical pricing has been significantly reduced to be more competitive with surgery centers,” he added. “Those are the first two obvious steps.”

Murphy welcomes the challenge, and he stressed that he’s not alone in the crusade for more affordable care.

“We have a really, really strong CFO in Charlie [Crevling], and he is helping us get more cost focused. I’ll be honest: as a physician, quality care is always my strongest driver, but we do recognize and there are going to be opportunities to become more cost effective. We have to do that,” he said. “The quality can be done in a more cost-effective manner, and that is going to be, among the first few years, the most challenging and most important part of my leadership.”