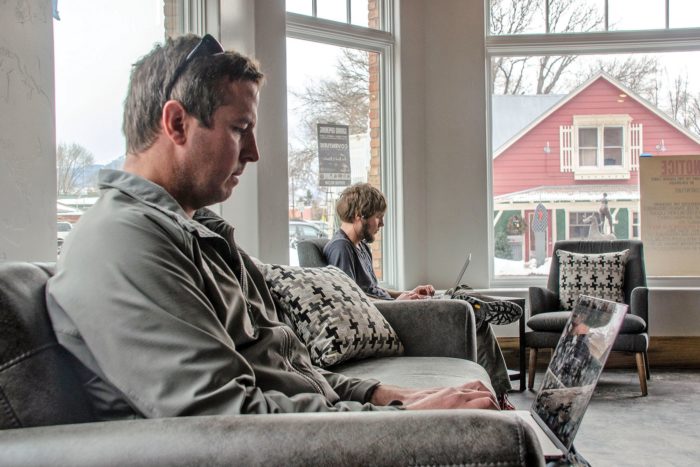 It’s more than a name change. It’s a new space with new backers and new vision.

“GlenX was basically a beta test for what became CoVenture,” explained part-time Director of Operations Evan Zislis. “When we started pulling all these public and private partners into the mix, the new name just sort of percolated to the surface.”

CoVenture, a 501c3 nonprofit devoted to business development, is offering a free public preview of its 201 Main St. location from 6 to 8 p.m. Feb. 1 — with food from Mi Castia, A Way Home and Suzie Jimenez and beverages provided by Roaring Fork Beer Company, Marble Distilling and Sopris Liquor & Wine.

The most prominent feature of the new space is the first-floor coworking space. There, folks can drop in and get high-speed internet and a place to sit on first-come-first-served basis for $20 a day. Folks who want a little more consistency can reserve a designated desk for $350 a month. In some ways, it’s like an entrepreneurial version of the Third Street Center, where it all got started. Board President and Landlord Tyler Moebius has moved his own company, FastG8, right next door, and while there are a few existing tenants completely unrelated to CoVenture, most tie in in some way. There’s a hub of software companies upstairs, as well as offices for partner businesses or supporters.

The Town of Carbondale and Garfield County have both backed the project, and the list of partners is ever expanding, from Roaring Fork Technologists to Aspen Entrepreneurs to Colorado Lending Source.

“When you get everyone under the same roof, you just give people an opportunity to communicate and collaborate,” Zislis observed.

Also upstairs are conference rooms and phone booths, not to mention the “party patio.” Folks who opt for a private office also gain all the benefits of CoVenture membership.

“We’re trying to provide flexible space for a variety of users to engage the community around business development,” Zislis explained. “Some of the spaces are a little funkier than others, but we’re working with what we’ve got to provide something for everyone.”

CoVenture’s programming is similarly tiered, from monthly ideation  — “business basics for beginners,” explained Zislis, who will teach the next retreat from 11 to 3 p.m. March 2  — to deep dive incubation on a quarterly basis and immersive acceleration annually. Another pitchfest — which last year facilitated $1.25 million in grants — is planned for April 12.

There’s also the day-to-day culture of social justice, environmental sustainability and leadership that CoVenture is working to support, with partnerships with Evergreen Zero Waste and Conscious Capitalism of the Valley. And the downtown location opens up potential connections with Colorado Mountain College and True Nature Healing Arts, to say nothing of the opportunities for a lunch break or midday workout.

And while all that is attractive to Brian Soby, founder of security management platform AppOmni, it’s really the mission itself that sold him.

“It’s a great space and they’re doing a great job of setting it up. If people are taking risks to build something like this, we want to support it,” he said. “It helps keep everyone motivated.”

If CoVenture helps a few small businesses succeed, he said, that’s a net gain for the community. AppOmni itself is split between Carbondale, San Francisco and a handful of remote workers, which has turned out better than just sticking to Bay Area.

“We’ve found it easier to find top quality people here than there. As a small company, you can’t pay what Google or Uber are paying,” Soby said. “And frankly, I didn’t want to live in San Francisco. I wanted to be here.”

Soby suspects some folks who moved to the Front Range expecting the mountain life might be getting sick of heading West every weekend. Carbondale could become a home base for a few of those — though it will never compete with the big city. And that’s not the point, anyway.

“So much of what keeps communities economically resilient is the diversity,” Zislis said.

“We’re really hoping to have this rich programming that allows people with a wide mix of expertise to come out to play then stay and work. I wish that I had this kind of professional support when I was first getting started.”