Crossing the bridge to Mah Jongg 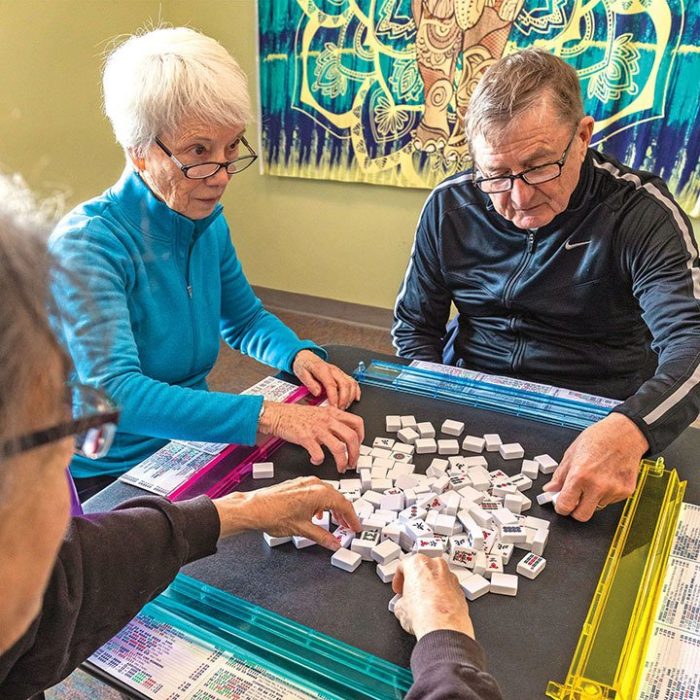 Mah Jongg is a long stretch from my Northwoods Minnesota roots of Buck Euchre, whist, and cribbage, but a good strategy game is never dull and always gets the brain chemistry percolating.

The camaraderie and friendly competition of playing board and card games seemed lost, like an ancient relic to some bygone era. I think of the hours, as a kid, playing Clue, Stratego, Monopoly, or just plain old checkers. My father grew up in a small town in northern Minnesota. Playing cards and games were what you did to pass the endless hours of subzero temperatures.

Mah Jongg has been on my radar to learn, but I never found the right opportunity to learn how to play it. You can imagine my delight when I met River Valley Ranch (RVR) resident Carol Sherman at The Sopris Sun’s tenth birthday party a few weeks ago, and she asked if I golfed (“No”) or skied (“No”) or played Mah Jongg (“No, but I certainly want to learn!).

Sherman learned the game about four years ago as a way of meeting new people. It became an embarrassment of riches as she recalls, “The day after my first visit to RVR’s Ranch House to learn to play, I received three phone calls inviting me to play bridge, hike, and go out to lunch.”

Some cite Mah Jongg as taking over in popularity where bridge once reigned supreme. Recently actress Julia Roberts appeared on a late night talk show and said she plays with her friends once a week to relax. It is becoming more mainstream and more popular with younger adults.

Sherman explains, “This is a game that my mother, grandmother, and aunts used to play,” She adds, “It was considered an older woman’s game. Not anymore.”

One place to learn the basics is at the Carbondale Recreation and Community Center on Monday, Wednesday, and Friday mornings at 10:30. There you will find players pondering a pile of tiles strewn in the middle of a card table. Each tile has a decorative Chinese symbol etched into it. The suit names are dots, bams, and craks, with tiles numbered one through nine. Other tiles consist of dragons, flowers, the four winds, and jokers.

Margaret Donnelly, Health and Wellness Coordinator at the Carbondale Recreation Center, said about a year ago recreation center member Lucy Hahn contacted her saying she had a couple of people interested in playing Mah Jongg. A flyer was posted asking for those interested to contact Hahn. About a month of instruction from Hahn on the basics of how to play was underway.

For Donnelly, the interest was encouraging, because “it’s a great activity and I want to see the community aspect of getting together and playing, so I’d like to see it grow.”

Donnelly talks about the benefits of playing the game, explaining, “Wellness is more than physical; it’s also mental and social.”

After that initial phase, Donnelly said it was listed in the Rec Center’s brochure and described as “a group designed to help newcomers learn how to play.” Donnelly is happy to report Mah Jongg will continue through this summer at the Rec Center.

The Rec Center group may be four to seven players on any given day. This particular Monday it is a group of four players; Marjorie DeLuca, Nancy Peterson, Sandy and Jon Towne.

The group plays for 90 minutes, which usually translates to three games. They can accommodate “learn-as-you-go” players. The atmosphere is relaxed and there is playful banter among them. Periods of concentrated tile studying, broken up by bits of laughter. If you make a mistake in the order of passing, for example, no problem. They discuss, correct it, and move onward. The novice is as at home as is the more experienced player.

Mah Jongg is played with four people but may be played with three, if necessary. Depending on how many people show up on any given day, one or two game tables are set up.

The game’s beginnings are the subject of some debate. Popular opinion believes it started in China, possibly Shanghai, in the mid to late 1800s and was brought over to the United States in the 1920s by wealthy world travelers. Some steps were Americanized and it was played at a more leisurely pace than its original counterpart.

The National Mah Jongg League (NMJL) is responsible for publishing the American version of the Official Standard Hands and Rules Cards. New cards, with slight hand variations, are published each year. These are the hands you are working to achieve. An example would be attempting to obtain a hand in the consecutive run category, consisting of four flowers, any two consecutive numbers, and two dragons, with all tiles being of the same suit.

Confused yet? I certainly was.

Did I mention you will also do the Charleston? American Mah Jongg, with its 1920s origins, incorporated the then-popular dance craze of the Charleston. It is the name given to the practice of passing tiles from one player to another. The Charleston is passing tiles to the right, across the table, then to the left. This play is supposed to mimic the dance’s moves.

In the process of learning the tiles, I am brought back to being a kid again, learning hearts, spades, diamonds, clubs, aces, face cards, and, yes, even those games with jokers. After a while, those terms become second nature.

Mah Jongg is the same. You learn the terminology and basic rules first. It is important not to be intimidated by it. As Sherman observes, “When learning don’t concern yourself with strategy or defense. In the beginning, just familiarize yourself with the rules of the game and identifying the tiles.”

Some people who play say they do so to keep their mind sharp and limber. A type of yoga for the brain’s neuropathways. That is one of the reasons Jon says he plays. Plus he enjoys a game he can play with his wife, Sandy. “Of all the card games, rummy, bridge, this works well as a couple.”

Many times there is betting. A winning hand can yield the player between 25 to 50 cents, paid to them by the losing players. Sherman explains, “Some people may feel intimidated by playing for money, even though it is only quarters and our game sets a limit of $5 in losses in one sitting.”

“When playing in my home, I insist that we play for M&Ms which makes for a much more relaxed setting.” However, Sherman adds a word of caution, “There is only one rule – Don’t eat your profits!”

Something tells me I could really like this game. If it’s a high stakes game for M&Ms, count me in.