Through the decades – a legacy of blacksmithing 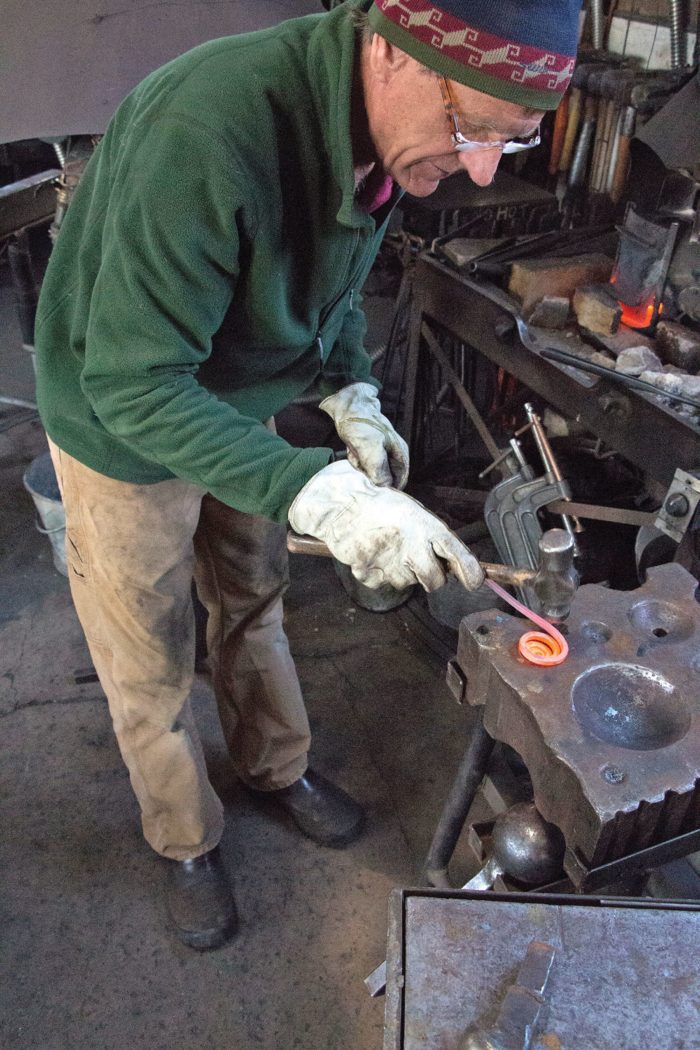 I knew that Carbondale had a history of blacksmithing. But I couldn’t believe it when Franz Froelicher, of Blue Heron Forge, said that at the turn of the millennium, 35 independent forges were counted in the Roaring Fork Valley.

I had passed a handful on wandering drives or on errands around town and had heard about others up in Marble or back in Missouri Heights, but 35? It turns out that many closed up or relocated when the 2008 financial crash hit, with only three or so of the area’s forges staying alive on the other side. But I knew that there were more than three now. Something had drawn the forges back to the Roaring Fork Valley since the crash.

“Back in the day, a lot of the ranches in the area had their own little forge,” said Will Perry, local blacksmith, but it was all for repair, shoeing horses, and making the occasional simple gate or railing. The Mid-Continent Mine in Coal Basin and the mine up Thompson Creek were off-loading coking coal, the type of coal used in a typical blacksmithing forge, and you could just drive up and shovel it into the back of your truck.

“It was all quite industrial. It was Francis Whitaker who brought the architectural component,” said Perry. Francis Whitaker was a master blacksmith who moved his shop from Carmel, California to Aspen in 1963. He saw the boom of the ski town and the housing market as a way to thrive in his craft, bringing art to what was once the simple get-it-done work to create things for around the house and on the ranch. Blacksmithing conferences and workshops began to thrive throughout the country.

Other blacksmiths followed Whitaker’s example, learning you could make a living and bring artistic excellence to your craft in this valley. You don’t run into a master blacksmith everyday, and so apprentices were visiting to learn from some of the best, sometimes staying and passing it on down the line. As Whitaker was getting older, he was looking for someone to pass along his shop to. It was moved down to the Colorado Rocky Mountain School in 1989, where the learning and craft continues through the extracurricular programming offered to students.

Other forges came and went throughout Carbondale before and since. Of course, the Village Smithy used to be a blacksmithing forge, and there used to be one across the street from the Pour House. The long red barn behind Peppino’s was John Hoffman’s first blacksmithing forge in the ‘70s, before starting the Roaring Forge, a blacksmiths’ collective, on Buggy Circle.

I still couldn’t imagine what would sustain thirty-five independent forges in this small valley, but I was assured that there was enough work for everyone.

“Everyone wants custom chandeliers, rails, gates, lights,” Froelicher said. “They want it to look like it’s been there for hundreds of years, and they’ve been great patrons. I’ll take a gate like this up to Aspen to install it, and they want to see welding certifications and bluebook regulations for it,” Froelicher told me as we looked at an ornate iron piece he had constructed, swirls of metal running downwards. “When I tell them there isn’t a weld in it, there are no regulations, no certifications, they’re baffled. But that’s what blacksmithing is. It’s craft, not construction.”

Work created in this valley is shipped internationally and to the coasts, but it’s also installed right in our backyard. The Rocky Mountain Blacksmithing Conference is held at CRMS each summer, where students and faculty heat up the forge throughout the school year, making pieces for around campus or creating art for the Rio Grande Artway, bringing out passions for this ancient craft that seems to teach both precision and playfulness. Patrons near and far still come to the blacksmiths of this valley for high quality art. The legacy continues.