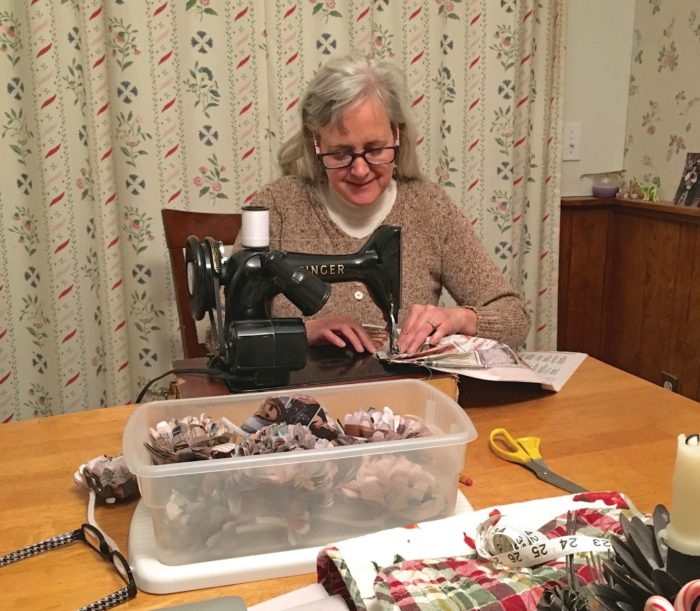 is Sun, chances are Terri Ritchie was the one who took all the stories and pictures and pieced them together into a beautiful whole. Now, even as she begins a new role, she’s sewing The Sun in a more literal sense.

But let’s not get ahead of ourselves.

Born Therese Gilcrest in California, she lived there for 10 years before her family moved to New Jersey and finally settled in the Denver area when she was 12. She was already showing signs of a creative inclination blended with a penchant for precision.

“I always enjoyed drawing and painting,” she said. “I had a geometry class in high school where we drew charts and graphs and that was pretty cool.”

Right out of high school, she went to work as a drawing clerk for Stone & Webster Engineering.

“They paid for education, so I went to school at night,” she said.

At first, that just meant general studies, but soon she developed an interest in graphic design — pursuing it on both the professional and educational fronts. Her eventual work role included typesetting and darkroom time.

“It involved using a straightedge and triangle to draft all the graphics.” she said. “Sometimes if things were slow in the graphic arts department I would get contracted out to the drafting trenches. Things are much better now.”

Meanwhile, she played midfield for the company soccer team, using a fake ID since it was technically a 21+ team. She later found she preferred playing with women to the co-ed team, but not before she got to know Dave Ritchie who was an architect for the same company.

“We were both kind of involved with other people for a long time,” she noted.

But one day when they both happened to be single, he asked her to an Eric Clapton concert.

“I asked who was going and he said it was just the two of us,” she recalled. “That sounded like a date. Then he asked me to dinner before the show and it was really sounding like a date.”

They had a great time, even though she was somewhat embarrassed when he put a card and a rose on her desk the next day.

When a round of layoffs began looming, Terri opted to go to part time and finish her schooling. Meanwhile, Dave found a job in Aspen.

“We did the long distance thing for six months or so, and when winter came I wasn’t ready to commit so we broke up,” she explained. But in the spring, I said I’d like to move up if he wanted me.”

They moved into a basement apartment on Cemetery Lane, with Terri finishing up her degree taking classes at Colorado Mountain College. At first, she worked for Unicorn Balloon Company.

“I had come up for the Snowmass Balloon Festival before this valley was on my radar and just fell in love,” she recalled. “With ballooning you don’t know where you’re going to land. You roll out the envelope, blow it up, then they take off and you chase them to get there before the balloon lands.”

Later, she did ad design and production for the Aspen Daily News.

“It was fun, but it was just so frantic,” she said. “That was when you had the big light tables and the wax on wax off things with exacto blades flying.”

When typesetting went by the wayside, she helped heave the “monster of a machine” over the balcony — the only way they could figure out to get rid of it.

Terri and Dave got married in 1992 and moved to Carbondale when their daughter, Elizabeth was born in 1994 (followed by Zack in 1996).

“I just decided not to come back from my maternity leave,” Terri said. “The commute and the childcare wasn’t going to come together.”

They found their house through a post-it on a bulletin board in Dave’s office and found that it “just felt more like home” than upvalley options. More challenging was the hunt for part-time work. Terri did a stint for Ackerman Ohnmacht advertising and a few years at The Valley Journal as an ad manager before they moved the production up to Aspen.

“It was fun to be back at a newspaper, but a weekly was more sane,” she noted.

Later, she did contract work for the dailies.

“I knew how hard it was to get people to fill in for you for a special project or vacation,” she said.

She also dabbled in non-newspaper positions at Ackerman Log Homes and doing office management for Dave. Her roles at Homes & Land and Timbers Resorts were somewhere in between.

“When you’re working part time and with family, it all kind of blurs,” she said.

As Elizabeth and Zack grew up, she was also involved in their school events, whether it was Destination Imagination, soccer, Booster Club or band.

When the Valley Journal closed in 2008, her hours had just been cut.

“I was really excited when I saw that the Sopris Sun sprouted up,” she said. “I was prepared to just volunteer until I found my real job and then I saw an ad in the paper.”

At the time, the fledgling nonprofit was based in the basement of Amoré Realty, and while founding board member Rebecca Young had laid out a couple of issues, that wasn’t sustainable long term. So Terri set up a system and followed it for the next decade.

“It’s like my weekly puzzle,” she said of laying out the paper. “It’s a challenge to fit it all and make it look as good as possible.”

Meanwhile, she’s outlasted everyone else on the staff and board as The Sun matured.

“There was a lot of learning going on in the first years. There’s just been so many people involved throughout the years that bring all kinds of different strengths,” she said. “Bob (Albright) really helped get the ads established. Lynn (Burton) brought a lot of experience and history. It was kind of the Jake and Jane show, but I was happy to support.”

Now, however, it’s time for full-time at Gran Farnum printing.

“I’m going to focus on me and my professional life,” she explained. “Printmaking was one of the first things I was interested in. When I did the tour and saw their press, it brought it all back.”

But before she goes, she’s showing off the paper one last time in a line of clothing for the Green is the New Black Fashion Extravaganza. She got the idea from the First Fat Friday parade when she made a cake and skirts out of newspaper — only to have it all rained on.

“I always thought it would be fun to do a line of newspaper clothing for the fashion show,” she said. “For the Wizard of Oz, I could see the outfits and how I would do those. It just seemed like a good fit, and it has been an interesting challenge.”

By the time the line hits the runway, Ylice Golden will be sitting in Terri’s chair — more on that next week. Terri is optimistic that the paper will go on strong.

“I hope it continues to shine brightly and the next decade is as great as the last,” she said.