TRTC’s ‘Of Mice and Men’ brings audience to its feet 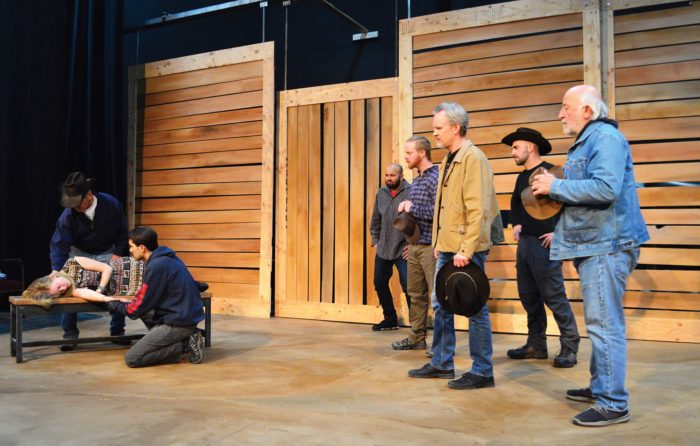 The action opens with George Milton (Corey Simpson), chiding Lennie Small (Owen O’Farrell) for drinking water from a muddy stream while rough-camping near Soledad. George and Lennie are two “bindlestiffs” who have arrived in California’s Salinas Valley after having fled their last job.

Drawing on his own experiences as a bindlestiff — an itinerant worker who wanders as a hobo — Steinbeck offers a glimpse into the lives of 250,000-some manual laborers who wandered California during the Dust Bowl era. It was a time when fields were plowed by mules and men rather than machines, a time when thousands struggled just to keep a roof over their heads and food in their bellies.

Like the Joad family in “Grapes of Wrath,” Steinbeck’s bindlestiffs have become icons of American literature. Lennie possesses strength enough to reap and bale from sunrise to sunset, but he’s dim-witted. Loving soft things, he carries a dead mouse in his pocket. George can’t make him understand the danger of handling it, any more than he can make the childlike giant understand the dangers posed by his lack of social skills.

In their portrayals, Simpson and O’Farrell simultaneously live up to their characters’ iconic status while making George and Lennie poignantly human. The two leads, supported by a strong ensemble — including Bob Moore, Sonya Meyer, Tom Cochran, Gerald DeLisser, Nick Garay, Dana Gaubatz, Brian McIsaac and Willie Moseley — brought a full house to its feet in appreciation of a powerful performance last Saturday.

For this production, TRTC Founder and Artistic Director Lon Winston has made an encore return to directing. In his able hands, “Of Mice and Men” — a play that was criticized in its 2014 Broadway revival for being “as fluid as a diorama in a history museum” — proves dynamic and tragically riveting.

The play is all the more compelling for the fact there’s no real villain to compel the action. Steinbeck penned the play’s name by echoing the poet Robert Burns’ who, in his Scottish poem “To a Mousie,” wrote that the “best laid schemes o’ mice and men gang aft agley.” The mousie was assaulted accidentally by a plow.

Something similar happens here. It would be easy to imagine a Sam Sheppard-style explosion set off by Steinbeck’s characters: The ranch owner’s quick-tempered son, Curley (Nick Garay) is looking for trouble from the get-go. He’s controlling and jealous of his isolated and lonely wife (Sonya Meyer). Feeling the tension, the hired hands, all desperate to hang onto their jobs, give Curley and his wife a wide berth. George warns Lennie to stay away from both Curley and his wife.

It’s not overt violence that ultimately leads to the play’s killing conclusion. It’s a kind of fate. This reviewer won’t blow the ending, but suffice it to say that character is destiny.

The characters on TRTC’s stage are compellingly played: Nick Garay’s Curley is tautly menacing. Veteran character actor Bob Moore brings both humor and pathos to his portrayal of Candy, an aging handyman who has lost one hand in a ranch accident. Worried about becoming as useless and dependent as his ancient dog, Candy wants to join Lennie and George in their dream of buying a little farmstead.

In portraying Crooks, a black man with a crooked back, Gerald DeLisser gives him a humanity that belies the pride and bitterness that at first defines the character. Isolated by the racism of the era, Crooks lives in the barn and is visited by no one — except Lennie, who is too dimwitted to understand the social rules.

Crooks’ loneliness sets the leitmotif for the play. He says, “A guy goes nuts if he ain’t got anybody. Don’t make any difference who the guy is, long’s he’s with you.” With this story, Steinbeck is telling us that we all need one another.

But ultimately, no one walks with us along the whole road of life: not a wife, not a dog, not a best friend. The best-laid plans of mice and men “go aft agley,” and eventually, we all wind up where Lennie and George began — in Soledad.

That’s a town in Steinbeck country, and its name, translated from Spanish, means “solitude.”

TRTC’s production “Of Mice and Men” continues through March 9. For tickets see thunderrivertheatre.com.