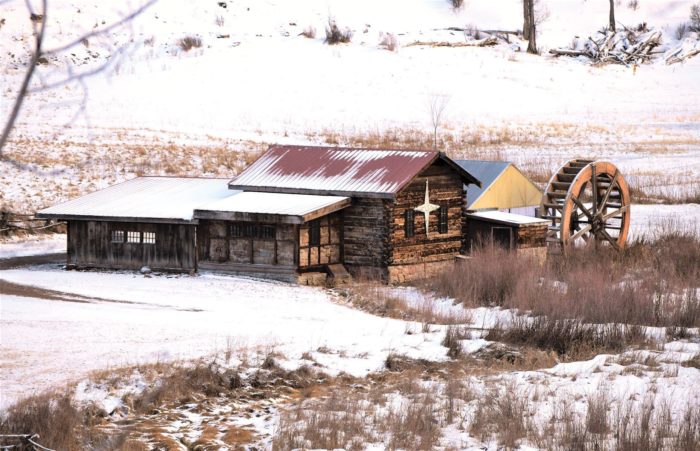 One of my latest historic interests is wooden water wheels.

It started when I signed up for an outing with Museums of Western Colorado to the Escalante Canyon. It piqued my curiosity because it included a hike to “the only surviving water wheel on the Gunnison River.”

Anything historic containing the words “last” “first” or “only” is an immediate attention grabber for me. The original wooden wheel was believed to have been built in 1911 but was reconstructed using steel around 1946. Its purpose was to deliver water to ditches used for irrigation.  Unfortunately, due to heavy rains we were unable to make it to the wheel.

Was it a coincidence that a week prior to my museum outing I inadvertently stumbled upon another historic water wheel on our trip to Montana? Probably.

We stopped to fish the Green River on our way home. As we drove looking for a campsite, we came upon the John Jarvie Historic Site which contained a restored water wheel originally built in the late 1800s. It was also used to pump water from the river for irrigation purposes.

A third water wheel appeared in the news one week after my Escalante outing.

This time the wheel was located on the Colorado River in McCoy, a small town 20 miles north of Wolcott. It stands over 40 feet high and was used to irrigate pastures located at least 15 feet higher than the river. It was built in 1923 and is on private property. The current owner, John Comer has done a remarkable job of preserving it. It is said to be the largest wooden water wheel in Colorado.

These historic water wheels inspired me to finally research one a little closer to home which I have driven by innumerable times. It is located in Filoha Meadows approximately four miles north of Redstone.

I imagined it was built in the late 1800s by homesteaders of the Crystal River Valley.

Let’s just say I was about a century off.

This particular water wheel was built around 1994. Its purpose? A prop in a Disney movie called “Tall Tale: The Unbelievable Adventure,” which was released in 1995.

Yes, I immediately checked out the movie from the library and watched it. There is something magical about watching a movie filmed 30 minutes from home.

Chair Mountain sits majestically as the backdrop in many scenes. A couple of times the main character is in a rowboat on Maroon Lake.

Although this movie didn’t win any awards, the scenery is spectacular. Patrick Swayze isn’t so bad either.

It’s been awhile since another water wheel has made its presence known.

Sure, with a few keystrokes I could find out about every water wheel built. But to me, the appeal is going on an adventure and having something catch my interest.

This adventure led me to finally investigate a landmark I repeatedly drove past and kept meaning to go home and look up.  What an unexpected story it told.